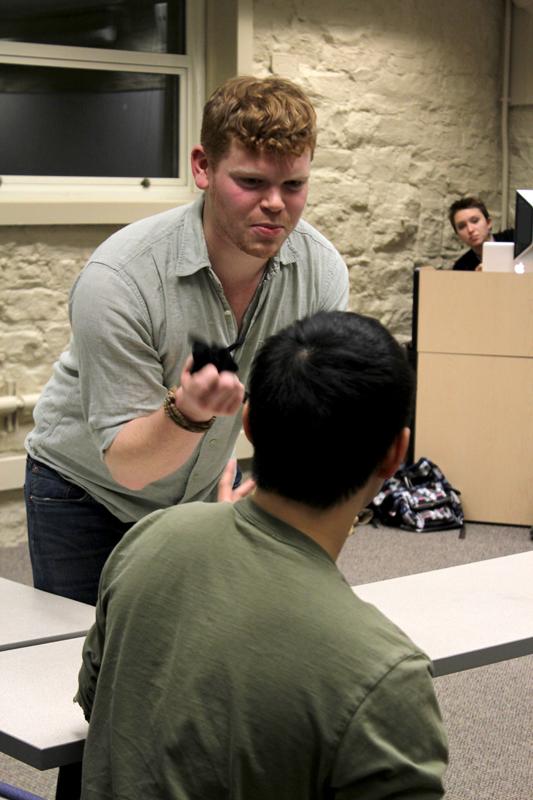 Director Brendan Yukins elicits emotion from his actors both on- and off-stage. “Midnight’s Dream” transforms Shakespeare’s woodland setting into an S&M dubstep club on the outskirts of Chicago.

Northwestern theater group Lovers & Madmen typically performs classical plays but often adds a little twist. “Midnight’s Dream,” based on Shakespeare’s “A Midsummer Night’s Dream,” certainly doesn’t fail to take the Bard to the next level. Director Brendan Yukins leads this adaptation of the classic play, which is set in an S&M dubstep club recreated in Shanley Pavilion. The Communication junior recently spoke with The Current about his inspiration and what the audience should expect when they see “Midnight’s Dream.”

The Current: How did you come up with the S&M dubstep idea?

Brendan Yukins: I was thinking about Shakespeare’s concept of “the woods.” Have you ever been in the woods at night? It’s scary. And the idea that there are cutesie fairies in Midsummer ticks me off. In Shakespeare’s time, fairies were scary, dangerous and real, and they would hide in the woods where people would have illicit love affairs or would wander and never return. There is an element of very real danger. When interpreting a space we have today in contemporary Chicago, we thought of an S&M dubstep club because it embodies a society that is both sexy and scary.

Yukins: Instead of having a stage and an audience, Shanley is a club and audience members are in the club with scenes happening at the same time all around. The audience isn’t being told what to look at or do. All the actors have watches on them to know when to start a scene. The whole idea is that the audience could be in a club and not see anything or only follow a few characters. During prior rehearsals, all the 15 actors write down what is happening to them during the play when they aren’t in a scene. And the bars are real! You can actually order drinks next to characters while they are performing a scene — nonalcoholic of course.

The Current: Any other twists?

Yukins: When adapting Shakespeare to the stage, you cut all the extra stuff to keep the show moving. All the lines we cut, we gave to an S&M dubstep artist, and he created an all-new series of songs that each member of the cast sings or raps. These tracks play as background music in the club during the show. We also have a very keen eye that an audience should not have to suffer through a show; if a show is a bore, it’s a failure.

The Current: What inspires you about theater?

Yukins: There is a great quote by Jackson Pollock: “Art is the physical manifestation of empathy.” The most important thing for me is that you are able to put yourself in someone’s shoes and see how they think and feel. Especially in this show, we are talking about sexual minorities and giving them a sort of voice. The fairies in the club are the people who don’t quite fit in to society, like the Athenians do.