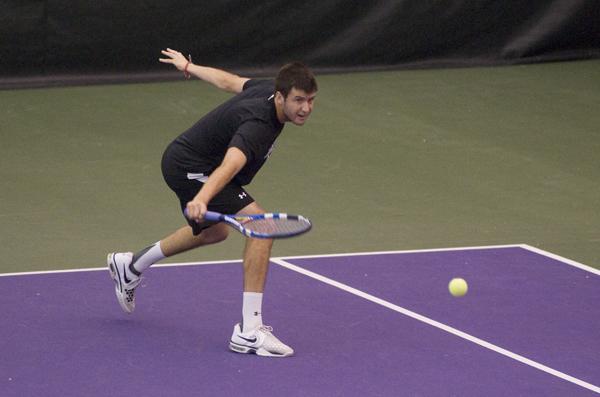 Senior Chris Jackman plays a shot during a recent home match. Jackman and the Wildcats ended their nine-year losing streak to Notre Dame on Tuesday, and remained undefeated this season.

After Sunday’s win against Louisville, junior Raleigh Smith said Northwestern didn’t need to upset the Cardinals to know they could compete with No. 30 Notre Dame. Still, Sunday’s match proved to be a telling precursor to Tuesday’s battle.

The Wildcats kept their undefeated streak alive Tuesday night with a narrow 4-3 victory, breaking a nine-year losing streak against the Fighting Irish.

“We all talked about it before,” senior Chris Jackman said. “It’s been nine years since we’ve beaten Notre Dame, and enough’s enough. We came into this match and our main focus was to take it from them and be aggressive and really win the match.”

NU got on the board first, taking the doubles point with wins at the No. 2 and 3 positions. Smith and senior Sidarth Balaji took the first match 8-5 and now own a perfect 8-0 doubles record this season. A tight 8-6 win by sophomore Alex Pasareanu and freshman Mihir Kumar secured the doubles point for the Cats and ensured they would head into singles play with the edge.

“All three teams came out pretty fast, and we definitely played more aggressively on our own serve,” coach Arvid Swan said. “The guys really wanted to beat Notre Dame. They put forth a really competitive effort that gave us the chance to win. Notre Dame is a team that is, in my view, a top-25 team and so there’s a lot of incentive there.”

After dropping the No. 6 singles match, the Cats were back even at 1-1 with the Fighting Irish. A straight sets win by Balaji and a comeback three-set victory from Pasareanu gave NU a 3-1 lead.  However, with Smith dropping a tight two-setter at the No. 2 position, victory was still not within the Cats’ grasp.

At 3-2, NU found itself in two deciding sets at the Nos. 1 and 5 positions. A comeback in the second set had put senior Spencer Wolf even with Greg Andrews in the No. 1 match, but Andrews gained the lead in the final set.

“Our games were pretty similar and we were just ripping back and forth and both fighting hard,” Wolf said. “He just came out on top and he played really well.”

Jackman, playing at the No. 5 position, had forged a similar comeback, taking the second set without dropping a game. In the third set, Jackman got the early break but his opponent fought back and the two traded breaks. Jackman finally got the edge, breaking Wyatt McCoy in the 10th game to complete his 3-6, 6-0, 6-4 win and the 4-3 win for the Cats.

“Even though this is my senior year, there are always still nerves, especially since we’d never beaten Notre Dame,” Jackman said. “I knew I needed to win my match. … I just refocused, changed strategy and told myself that I was going to beat this kid.”

On Tuesday, Jackman was named the Big Ten Player of the Week for the first time in his career.

“It’s pretty cool, and it’s nice to be recognized, but it’s a group effort,” Jackman said. “Everyone else’s win is just as important, and without the doubles point, we wouldn’t have beaten Notre Dame, so I just got a little bit lucky that I was the last one on the court to close it out. It’s a team effort, and that’s what’s fun about team tennis.”

NU began last season with a 5-0 streak that Notre Dame ended. Heading into the weekend with a 5-0 record again, the Cats will face a new opponent in Virginia Tech in the first round of the ITA Indoor Team Championships.

“We’re going to have to make some adjustments on the fly in terms of just figuring out our opponents’ weaknesses,” Swan said. “Their top three guys barely lost in the fall, and they’re led by a freshman who’s No. 29 in the country, so it’s a really good quality opponent.”

Now ranked No. 37, the Cats have already improved five spots on their year-end ranking from last season and have earned their highest ranking since January 2010.

“We’d never beaten Louisville or Notre Dame since I’ve been here, so getting those two wins, we’re on a high right now,” Jackman said. “But the key is for us to stay level, and yes, take confidence from those two matches, but now our next focus is Virginia, and we’ll just look at Virginia and not look past that. But this is definitely a huge opportunity for us and we feel really good about it.”