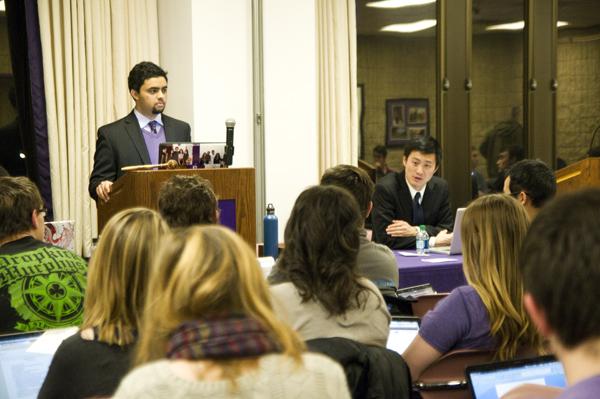 Steven Monacelli, ASG’s vice president for community relations, and ASG senators Weinberg junior Mike Morgan and Weinberg senior Ian Coley, wrote and proposed a bill, “Ad-hoc Committee on Gun Control.” This would create a committee of at least three senators who would compose an open letter urging Congress to collaborate with the executive branch in creating bipartisan legislation on reducing gun violence.

The legislation endorsing the reduction of gun violence was originally one resolution, which was proposed at ASG’s Jan. 16 meeting. It was then split into a resolution and bill, as ASG protocol dictates that a bill is needed to form a committee. The new proposed resolution, titled “Students Support Gun Control,” would endorse President Barack Obama’s executive orders calling for improved gun legislation.

“We have done this numerous times; we have taken a political stance,” Monacelli, a Communication senior and former Daily staffer, said. “We are truly a political body. There is nothing in the code that limits us from representing the interests of our students.”

Following the proposal of the new resolution, ASG Speaker Ani Ajith opened the floor for questions. However, senators asked only a few questions with little contention.

Contentious debate followed as senators discussed ASG’s right to endorse political stances. Some senators argued that because politics directly impacts students, ASG has a duty to address political issues. Others questioned the impact of some political matters.

“Does this affect the lives of Northwestern students, or is this just endorsing opinion?” Moore, a Weinberg junior, asked.

Some senators questioned ASG’s competence in making suggestions to investors for the University. One senator asked why investors for NU had not already divested from the coal industry if investment was in fact a poor choice.

“If they could have a huge PR stunt out of this, to be able to say, ‘We divested from coal in response to students and faculty coming together,’ that’s a big sell to the University, but they have no outside pressure to do that, so that’s what we want to be able to bring to them,” said Weinberg junior Mark Silberg, ASG’s associate vice president for sustainability and one of the resolution’s authors.

The only legislation that passed was a bill to take funds from the Senate Project Pool to purchase four new Apple laptop chargers for the charger rental service at the University Library. All other legislation will be further debated and voted on during next week’s meeting.

Ajith, a former Daily staffer, said there were strong indications that the resolution divesting from the coal industry would pass during next week’s meeting.

“The divestment resolution was a great example of Northwestern students’ leadership in a critical area and making sure its principles and actions aligned,” the Weinberg junior said.