Men’s Basketball: Northwestern counting on centers to hit the glass 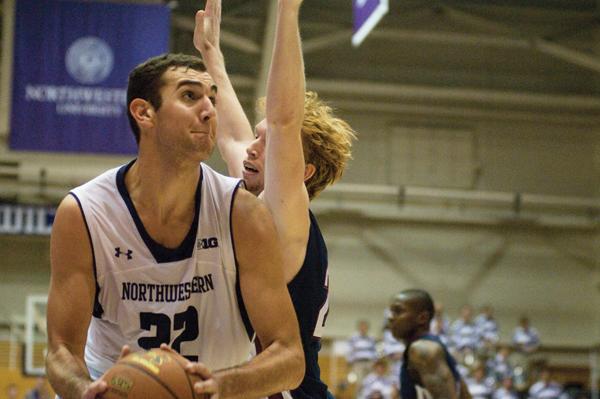 Freshman center Alex Olah attempts a shot. Olah struggled rebounding against Indiana, and has averaged only 4.3 rebounds per game so far this season.

Centers are supposed to be the biggest players on the floor, which should give them a distinct edge on the glass.

That has not been the case this season for Northwestern, and it certainly was not true Sunday against then-No. 2 Indiana.

The Wildcats started Alex Olah, a true freshman, at center; redshirt freshman Mike Turner served as Olah’s backup. The two played 35 combined minutes against the Hoosiers on Sunday and had just a single rebound between them, while Indiana’s center Cody Zeller had 13 rebounds in 36 minutes.

Coach Bill Carmody was very critical of his pair of centers’ rebounding after the loss. After watching the film of the game, Carmody said he did not see too much wrong about how the centers played and chalked up the performance to going against an elite player like Zeller.

“There wasn’t anything in particular, but if you only get one rebound from the center position, it’s trouble,” Carmody said. “(Olah)’s young, and he’s got to learn, and it’s part of it. He’s going against probably a top-5 pick in the NBA draft this year, so 13-1 is going to happen sometimes. You just don’t want it to happen too often.”

As a whole this season, Olah is the team’s third-leading rebounder, averaging 4.3 boards per game. He trails only senior guard Reggie Hearn who averages 4.6 rebounds per game and senior forward Jared Swopshire, who leads the team at six rebounds per game.

In Big Ten games, the Cats’ numbers have not gotten any better. Olah and Turner have combined for 5.1 rebounds per game in nearly 37 minutes of playing time, which is nearly a rebound below Swopshire’s total in conference games alone.

Both Olah and Turner said the Big Ten has not been any more physical than they expected heading into the season. Turner had a chance to watch Big Ten teams from the bench last season during his redshirt year and said although he anticipated the league to be physical, it’s a tough thing to plan for.

Swopshire has a lot of experience going up against tough competition from his four years at Louisville in the Big East, and it has shown so far this season. As the team’s leading rebounder, he has done an excellent job at grabbing boards from the power forward position. He said his timing is key in making him a good rebounder, an element he has tried to help Olah and Turner with.

“Working with them in practice and showing them little things that I’ve picked up over the years,” Swopshire said. “It’s all anticipation, timing, where the ball’s going to come off the rim and just going to get it.”

NU welcomes No. 12 Minnesota to Welsh-Ryan Arena on Wednesday night for a game that will challenge the Cats’ ability to clean up the glass.

The Golden Gophers rank fourth nationally and second in the Big Ten in rebounding margin compared with the Cats, who rank 289th in the country and last in the conference. The disparity was evident when the two teams met Jan. 6 in Minneapolis, when Minnesota outrebounded NU 47-20 and had 21 offensive rebounds for 14 second-chance points.

This time around Swopshire said the Cats need to make sure they put a body on everyone and it’s important that all five players crash the boards like the Golden Gophers.

“They have all five guys going to the glass, that’s what makes them such a good rebounding team,” Swopshire said. “We’re really going to have our hands full, but we’re up to the challenge.”