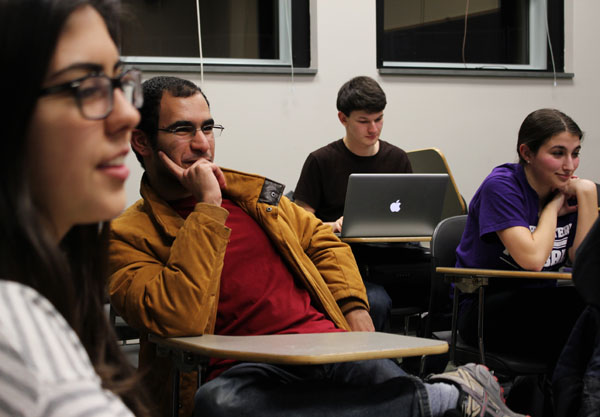 Sophomore Mohamad Akef participates in the gun control debate during the College Democrats meeting. The group also discussed how they would present their views to the Northwestern community.

In the wake of multiple school shootings across the country, Northwestern student groups are bringing the gun control debate to campus.

Following President Barack Obama’s signature of 23 executive orders on Jan. 16 calling for gun control reform, members of the Associated Student Government presented an impromptu resolution supporting the president’s decision to take action on an issue they plan to discuss at Wednesday’s senate meeting. On Tuesday, campus political groups weighed in on the resolution, just hours after three people were shot at Lone Star College in Texas.

In the interim, ASG has drafted and edited a resolution supporting the president’s decision to take action on gun control. ASG members Steven Monacelli, Mike Morgan and Ian Coley co-authored the resolution and emphasized gun control was an issue relevant to the student body because educational environments have recently been the site of several mass shootings. Following the introduction of the resolution at last week’s meeting, NU College Republicans began circulating a petition around campus stating that partisan endorsements are not a part of ASG’s mission.

NU College Republicans president Dane Stier said no student should be “ostracized” by ASG decisions, and the democratic body should steer clear of partisan issues.

“This is a very contentious issue right now,” the Weinberg junior said.“We’re trying to make sure that no student is left out of any decisions made by ASG when there’s no reason that they have to be.”

In addition to the petition, which had 56 signatures as of Tuesday night, Stier co-authored a letter to ASG with the president of Students for Liberty, Weinberg junior Justin Moore, and said he may voice his opinion at Wednesday’s meeting.

He said he hopes ASG will strike down this resolution entirely and instead pass a resolution to not comment on politically charged issues in the future. ASG’s history of weighing in on polarizing issues extends from stances on the Vietnam War to climate change.

NU College Democrats also discussed gun control and the draft of ASG’s resolution at their Tuesday night meeting. The group debated the points set forth in Obama’s 23 orders and legislative recommendations and also delved into discussion of how the Second Amendment’s “right to bear arms” clause should be interpreted.

Following the discussion, NU College Democrats co-president Lauren Izaak read a draft of the ASG gun control resolution to the group. Although some students were at first skeptical, the group unanimously supported the legislation after reading the draft.

“It was interesting that the resolution itself actually changed people’s opinions about whether ASG should be allowed to speak on this or not,” Izaak, a Weinberg junior, said.

As Izaak finished reading the resolution, one student exclaimed “I get it now!” and many agreed they previously thought gun control did not fall under ASG’s intended mission.

Even those in the room who oppose many of the Democratic attempts to increase gun control supported the ASG resolution. Weinberg junior Alex Deitchman spoke candidly of his support for the Second Amendment and due process of the law throughout the group’s debate.

“I thought (the resolution) was reasonable,” he said. “It’s a way for Northwestern students to speak in a stronger voice to the political community.”

Deitchman added he thought individual students who opposed the resolution were free to write to their representatives and express that opinion themselves.

As the resolution is slated for discussion as new business at Wednesday’s meeting, ASG Speaker Ani Ajith said he hopes people read the legislation very closely and that it leads to a campus-wide conversation.

“This is obviously a hot button issue,” the Weinberg junior and former Daily staffer said. “Anyone is free to come and speak.”

Ajith emphasized ASG had not made any decisions on the resolution yet, as senators thought they needed at least a week to discuss the resolution at the Jan. 26 meeting. If the resolution follows typical ASG procedure and senators do not move the resolution to new business and vote on it on Wednesday, it will be discussed at Wednesday’s meeting and then voted on the following week as old business.

“We haven’t made a decision yet at all,” Ajith said. “We need to examine its relevance.”

Correction: A previous version of this story misstated Dane Stier’s class. He is a junior. The Daily regrets the error.