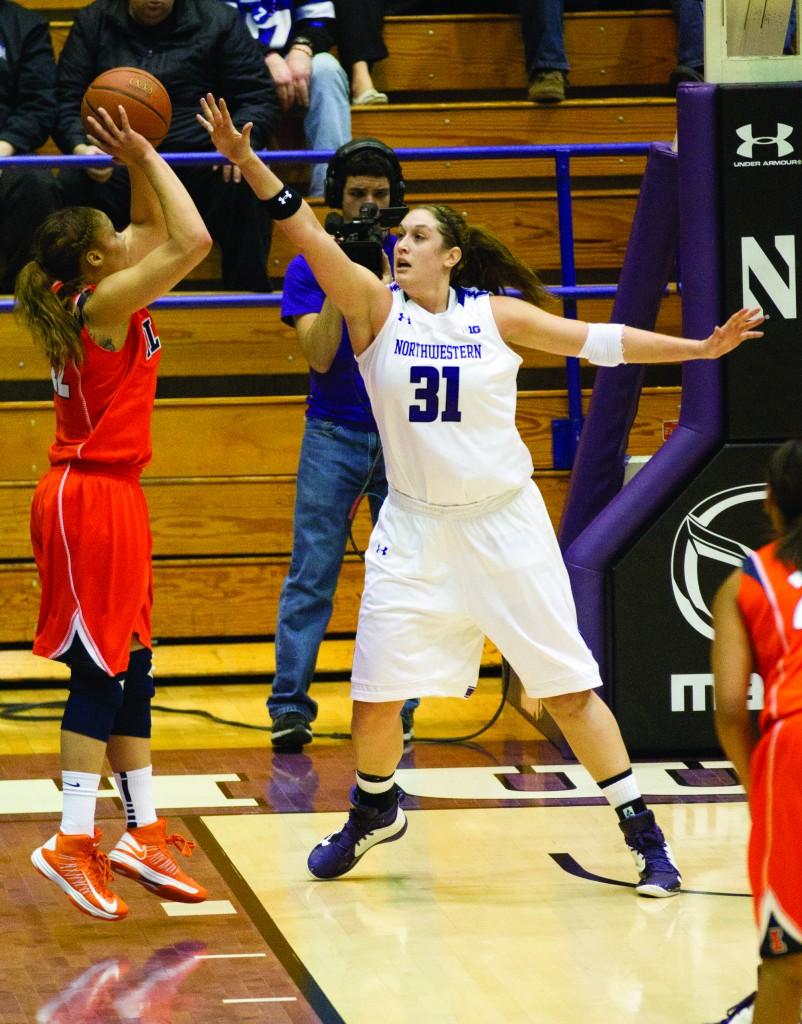 Senior forward Dannielle Diamant goes for a block during a recent home game. Diamant and the Wildcats have made defense a priority for the next game against No. 25 Michigan.

The Wildcats hope to claw their way back into Big Ten relevancy with a win against No. 25 Michigan.

Coming off a mistake-ridden performance against in-state rival Illinois, Northwestern aims to decrease the amount of turnovers they commit as well as improve their offensive efficiency.

“That’s our biggest challenge with a young team,” coach Joe McKeown said. “Trying to take care of the basketball. The more we can cut down turnovers, the more chances we will have to win. It’s been an Achilles for us all year.”

NU committed 34 turnovers against the Fighting Illini last Thursday and Illinois was able to capitalize on the opportunities to clinch a 65-47 victory. McKeown isn’t pleased with the opportunities the Cats provided their opponents, but sees the potential for the team to improve and find more success going forward.

“We just need to make sure we’re doing the little things,” he said. “Making the extra pass, setting a good screen, sharing the basketball. This is an unselfish team. I’m not as concerned as you might be at this point if you felt like people were out for themselves.”

McKeown also emphasized the amount of learning the team still needs to do, with two starting freshmen and two seasoned juniors sidelined by injury.

“We’re relying on people that haven’t been in this position before,” McKeown said.

However, McKeown was quick to praise the Cats’ defense so far this season, a part of the game that will be key for the Cats against the Wolverines.

Senior forward Dannielle Diamant, one of the two senior starters for NU, highlighted Michigan’s impressive shooting abilities and the Cats’ focus on preparing to guard against their shooters.

“They all shoot the ball really well,” she said.

Diamant singled out Michigan senior guard Kate Thompson as someone the Cats need to focus on guarding. Thompson’s 47.2 three-point shooting percentage is good for second in the NCAA.

“(Michigan’s) offense is good, they coordinate a lot of cuts and screens,” she said. “Every player is flexible and versatile for us, so it’s going to be about our defense.”

Offense has been an issue for the Cats all season. NU ranks eighth in the Big Ten in total points and last in the conference in scoring margin. Hackney explained the Cats’ approach to finding more success on offense against the Wolverines.

“They have a strong 2-3 zone we’ve been working to fight against,” she said. “We just need to spread them out to give us more openings.”

The abundance of turnovers was a huge reason for the Cats’ woes against the Fighting Illini. Diamant is confident the Cats will be able to combat their turnover problem against Michigan and increase their time and therefore chances with the ball.

“We just need to play under control and play patiently,” she said. “Illinois’ pressure just got us and that showed with our turnovers.”

With the disappointing loss in their Big Ten home opener, the Cats are excited to get another chance at getting a win at home in Welsh-Ryan and they believe it will work to their advantage.

“We’re excited to have a nice home game,” Hackney said. “We’re in a great spot to explode. We’ve had a rough start, but it’s okay it’s not over. It’s good not to travel and to come out strong tomorrow in our zone.”

The bye week also positively contributed to the Cats’ preparation for the matchup and allowed them to work hard this past weekend.

While facing off against the talented Wolverines will be a challenge, the Cats are used to tough conference competition.

“Every team in the Big Ten is beatable no matter the ranking, whoever comes out the hardest comes out with the win,” Hackney said. “I think we can do it. We are capable.”