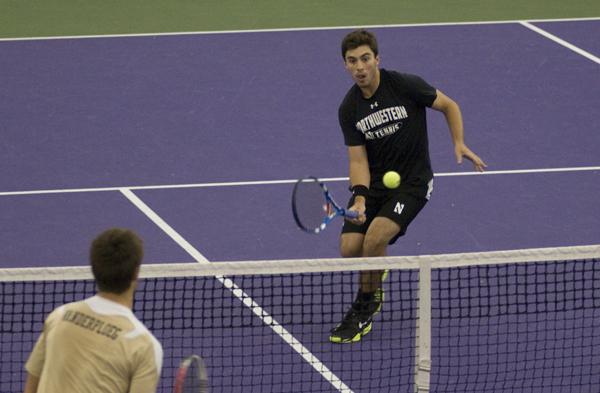 For the second consecutive Sunday, Northwestern will indulge in the wisdom of one of Chicago’s favorite figures, Ernie Banks, when they again embrace the mantra, “Let’s play two.”

After beginning their season with two wins last weekend, the Wildcats (2-0), ranked 41st in the country, now look forward to another Sunday doubleheader. Seven days after handling MAC opponents Ball State and Western Michigan with little difficulty, NU will welcome two more opponents to the Combe Tennis Center in Evanston.

First, the Cats will face 34th-ranked Louisville (1-0) in what could be NU’s greatest challenge before Big Ten play. The Cardinals began their season with a 6-1 victory over Nebraska on Sunday and will host Murray State and Morehead state in a doubleheader Friday, only two days before their clash with the Cats.

“I think Louisville is a top 25 team,” Swan said. “We know them pretty well. Very competitive team. They are a team that is going to play well in singles and play well in doubles. They’re going to compete through every position, and we’re going to raise our level and give ourselves a chance to win.”

That evening the Cats will face Cook County rival Chicago State (0-0), who will journey to Evanston after finishing a morning meet on their home courts in Homewood, Ill. NU has never before faced the Cougars in men’s tennis.

“Chicago State is another quality team, a local team that we’re excited to play as well,” Swan said. “They’re doing well within their conference, so it’s going to be a tough weekend.”

Having beaten Ball State 6-1 and Western Michigan 5-2 in meets the Cats won convincingly but far from effortlessly, and NU’s players seem to agree there is much work to be done, especially before another big weekend.

“Everybody has little things they can work on,” senior Sidarth Balaji said. “Playing a complete match is something we have all been trying to do. Not letting up a little bit, staying focused the whole match is something I feel like the team can get better (at).”

Balaji and his partner, junior Raleigh Smith, started slowly in their doubles matches against both Ball State and Western Michigan, twice coming back late in the matches to win 8-7 and 8-6 respectively. The next step is avoiding those deficits altogether.

“We can obviously be a little bit sharper,” Smith said. “I think I can speak for the whole team we feel like we can be a little sharper. I know I definitely can be. We just keep practicing hard and we’ll get there.”

While Swan’s squad battles Cardinals and Cougars in Evanston, NU’s women’s tennis team will be in Charlottesville, Va., where they’ll begin their winter season with a three-day tournament. When they return, the Cats will host Arkansas on Jan. 25 and either Purdue or Washington State University the following day.

NU had won 13 consecutive Big Ten championships before losing in the conference tournament last year and enters the 2013 winter season ranked 13th in the country.