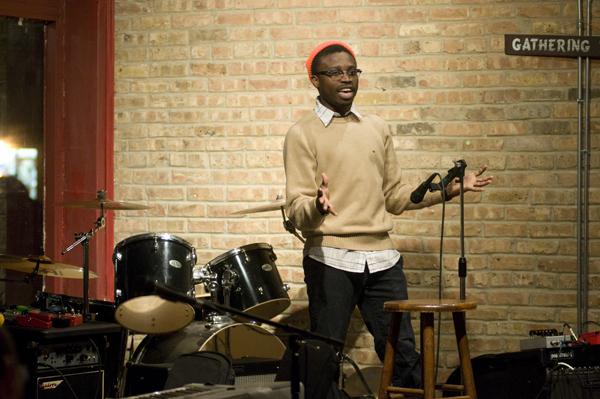 Evanston’s J.J. Java Cafe was alive with performances Tuesday night during U NU Arts Night, a developing project that brings Northwestern students together to showcase their artistic talents.

The show at the Foster Street cafe featured musical performances from approximately 20 individual students and groups. Though the night started out with a halting introduction and last-minute tuning, it only took one song for the enthusiastic audience of student attendees to begin cheering, clapping along to songs and talking amongst themselves between the performances of singers, guitarists, drummers and saxophonists.

This was the third Arts Night since its inception in November 2011 and the first organized by Oluwaseun Ososami, a Weinberg sophomore with a love for music and the DJ alter-ego “Mufasa, the Philofasa.”

After starting out in then-Weinberg senior Joshua Brechner’s apartment, Arts Night returned last May, this time at J.J. Java Cafe. Ososami said he was inspired by the outpouring of talent he saw, so he wanted to continue the show after Brechner graduated.

Some of Tuesday night’s performers had played at the previous two shows and agreed to perform again. Others, like Weinberg sophomores Alex Beer and Susie Neilson, had heard about the event and contacted Ososami to offer their talents.

“I went last year, and I was so impressed by all of the performers,” Neilson said. “I was like, ‘If I could ever do this I would feel so cool.’”

She sang a cover of Bon Iver’s “Skinny Love” Tuesday night while Beer played the guitar.

Weinberg sophomore Christian Keeve, who attended Arts Night after hearing about it on Facebook, said he was drawn to it because it stood out from standard campus events like speakers and lectures. He said he was interested in seeing “student talent” and appreciated the “informal, cozy, laid-back” atmosphere.

Ososami said he wants to continue increasing the visibility of Arts Night, adding he has high hopes that Arts Night will eventually become a “prominent event on campus,” akin to a student music festival.

Most of all, he said Arts Night was an effort to give students an outlet to display their hidden artistic talents. Before last year’s shows, Ososami said he never knew so many students sang or played the piano.

Beer and Neilson said they were excited for Arts Night to continue developing. They agreed there are not enough opportunities for students to be creative on campus.

“The music scene here, if there is one, not a lot of people know about it,” Beer said. “There isn’t much of a community where bands can come together, collaborate or share.”

Neilson said she is saddened that students often “lose their independent art projects and artistic endeavors.” She said she believes Arts Night can help to change that.

“It’s about the community; it’s about Northwestern,” Ososami said. “There is something unique artistically and musically about everyone on campus.”