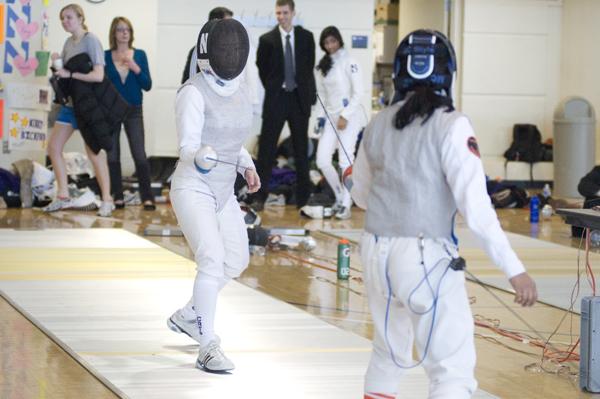 Northwestern competes during a 2011 dual in Evanston. The Wildcats dominated over the weekend at the Western Invitational, sweeping all their opponents en route to a 109-26 win, maintaining their undefeated record in 2013.

Had it not been for Stanford, Northwestern’s Saturday would have been a smooth start to 2013. After easily defeating University of California-San Diego, Florida and Air Force, the Wildcats faced a much tougher opponent in Stanford.

NU held a 15-7 record against Stanford heading into the event, but after coming off their seventh consecutive top-10 finish at the NCAA Championships last March, the Cardinal proved a worthy adversary.

“I didn’t feel that we were quite as intense as I would have liked us to be,” coach Laurie Schiller said. “But that’s why this is a good meet for this weekend, because it wasn’t as strong a meet as some others … and after a month of being off, I think it was a good opportunity to say, ‘Hey we’re competing again.’”

Despite being the youngest group among the team, with three freshmen and a sophomore, the foil squad dropped just six of 45 bouts, including an impressive 8-1 showing against the Cardinal.

“What I like about the team is that my whole life fencing has only been individual but now that I’m at Northwestern, it’s all about the team,” freshman foilist Jen Yamin said. “You feel like you have more on your back but the support of the upperclassmen really helped out with calming my nerves.”

Coming off her 21-0 streak at the NU Duals, Yamin was an important part of NU’s victory, winning 12 of her 13 bouts and all three bouts against Stanford.

“We definitely were starting to get a little worried but I knew that as a foil squad, we could do it,” Yamin said. “My teammates, Charlotte (Sands), Mikela (Goldstein), and Mary (Spohn), we all knew that we just had to stay focused and just bring out some victories. I think together we worked really well and helped out the team there.”

With epee and sabre falling behind to the Cardinal 3-6 and 4-5, the foil team helped give the Cats the narrow 15-12 victory.

“I was pretty happy with the foil team,” Schiller said. “I wasn’t quite sure how they might respond and I thought they responded very well … It’s an unusual sport. There’s always that individual aspect to it. Sometimes the kids that come in from high school and haven’t fenced on a team, it’s a new experience, a new sort of concept for them.”

Even with the added challenge of taking out an inspired Stanford team, the Cats improved to a perfect 16-0 in their first dual match of 2013, taking out Cal Tech 25-2 in their final match of the day to complete their dominant victory, winning an overwhelming 109 of 135 bouts.

NU’s schedule will only get more difficult, with top-ranked opponents Ohio State, Notre Dame and Columbia looming at the New York University Invitational in two weeks, but hard work and teamwork are the keys to the Cats’ success.

“We’re going to have to, right from the get-go, be ready to go,” Schiller said. “In New York, our first match is Columbia and that’s always a bear. But of course, it’s their first match of the day, too, so it’s a question who gets warmed up better and who’s ready to take it home. There will definitely be top teams there. We need to just keep working hard and get ready for these kids as best we can.”