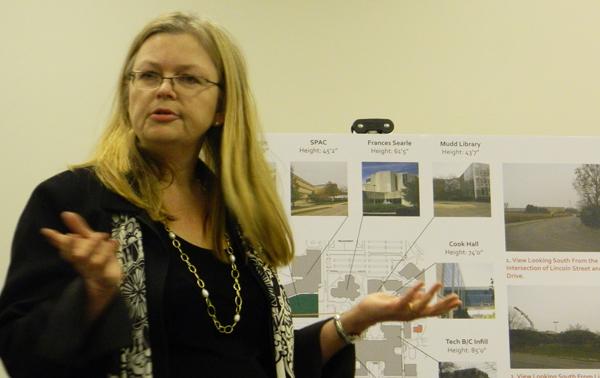 Bonnie Humphrey, NU director of design and construction, presents the University's plan for a new six-story garage on North Campus. The commission hopes to vote on the proposal at their meeting next Tuesday.

The Evanston Preservation Commission challenged Northwestern representatives at a special meeting Thursday night after the University announced plans earlier in the day to begin construction next month on one part of the new North Campus athletic complex.

Members of the commission expressed skepticism at times during the more than two-and-a-half-hour-long meeting at the Lorraine H. Morton Civic Center, which featured University presentations from Bonnie Humphrey, director of design and construction, and Paul Weller, director of facilities planning. The most immediate topic of discussion was a parking garage, intended to replace current parking on North Campus, as part of the $220 million athletic complex announced in September.

The garage has been proposed for the space immediately west of the Henry Crown Sports Pavilion and Norris Aquatics Center and will contain 1,125 parking spots in a six-level structure, according to a University news release. These spaces will replace the approximately 400 spots that currently exist in the location, as well as another 450 spots that will be taken away when construction starts in May on a new building for the Kellogg School of Management.

The garage will also contain space for a new weight room and fitness studios as well as offices for recreation and fitness staff, according to the news release. Construction is slated to begin in February, university spokesman Al Cubbage said.

“The new facility will provide significantly expanded and improved space for fitness, wellness and other programs for use by the entire Northwestern community,” Jim Phillips, vice president for athletics and recreation, said in the release.

That building is also part of the North Campus framework planned for later this year. During the construction process, parking will remain open in the lot east of Kemper Hall, according to the release.

Because part of the garage’s proposed location falls on historic land, building permits for the area lie at the commission’s discretion, although Evanston City Council can overturn the commission’s decisions, as they did in October when they granted NU’s appeal to proceed with plans on a new Sheridan Road visitors center.

The special meeting was called as an informational session before the proposal comes before the commission for approval at its regularly scheduled meeting next Tuesday.

Commission chair Garry Shumaker said after the meeting that because so much of the meeting focused on the University’s general plans, he will use Tuesday’s meaning to discern more of the specific plans for the garage. He praised the University’s awareness of its historic buildings but cautioned that the new athletic complex and an earlier proposal for the visitor center are a different animal.

“Even though (NU has) a reputation for preservation, these are much bigger new buildings that affect all that historical content,” he said.

Shumaker said he was hopeful the garage plan would come to a vote Tuesday. He said a similar discussion will come up when the University finalizes plans for Ryan Fieldhouse, the centerpiece of the new complex, which will also fall on preserved land.

Humphrey said she was optimistic the commission would approve the plan but still harbored some concern after Thursday’s meeting. She said she had not thought about what the University’s next steps would be if the permits are not approved.

The proposed garage is one part of the athletics and recreation complex development on North Campus, which will include the construction of a new multipurpose athletic facility, as well as renovations to SPAC and the field hockey and soccer/lacrosse fields. Space on the first and second floors of the parking structure will be utilized by NU’s audiology and speech/language/learning clinics and the McCormick School of Engineering and Applied Sciences.

Cubbage said he believes the renovations across North Campus will help improve life on campus.

“They’re all key parts of developing campus to provide better facilities for all members of the community, mainly students, but also for faculty and staff,” he said.

Construction on the parking garage portion of the building is slated to finish in early 2014 and recreational, and office spaces will develop later that year, the release said. The first portion of this project is estimated to cost more than $40 million. The University announced Dec. 30 it had passed $55 million in fundraising for the project.