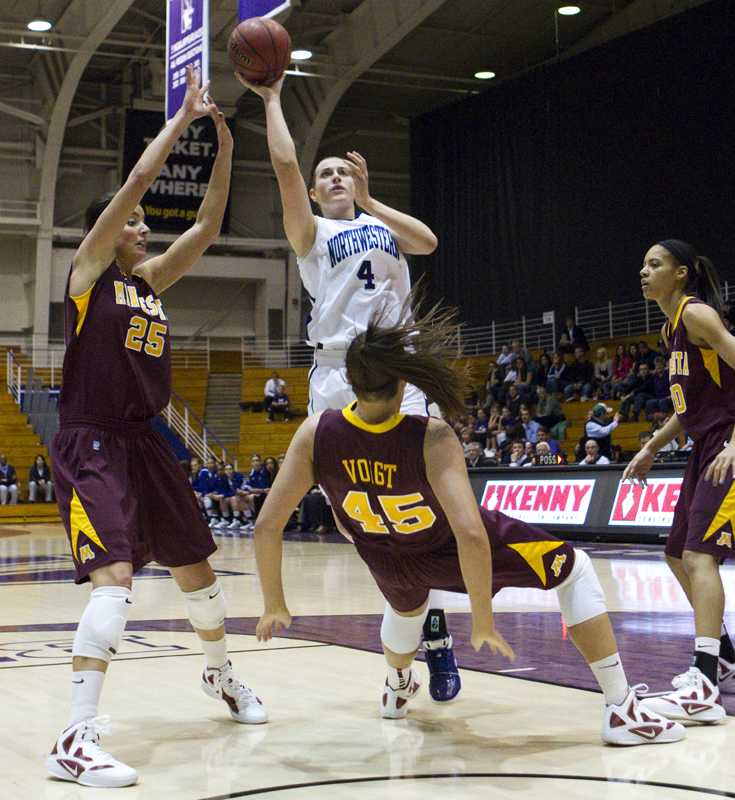 Senior forward Kendall Hackney attempts a shot against Minnesota. Hackney has averaged more than 14 points per game so far this season.

Northwestern is still searching for that elusive first Big Ten win – and it could come against in-state rival Illinois.

Last season, NU logged its first two conference wins against Indiana and Illinois. This time around, however, the Cats find themselves in a bit of a hole. NU is 0-2 in Big Ten play. In an effort to get back on track, the Cats look for their first conference victory against the Fighting Illini Thursday night in front of their home crowd.

“The Big Ten is a great conference to be in,” senior forward Kendall Hackney said. “For us, we need to get our confidence rolling. We had it coming into the Big Ten season but we had two hard games. All we can do is learn from them and just change it and go out and fix it in the next game.”

The last time Illinois came to Welsh-Ryan Arena, the Cats edged out the Fighting Illini by just 1 point in an intense back and forth battle that went down to the wire. NU went into halftime leading by 1 point, but Illinois’ Amber Moore hit a three-pointer with 12 seconds left in the game to tie the score at 58. With only 4 seconds left, sophomore guard Karly Roser went to the line for foul shots and hit one free throw to seal the game for the Cats.

“I think I’ve grown as an offensive player, I’m looking more for my own shot,” Roser said about how she’s changed since last year’s game. “And I think I’m better at free throws so I won’t have to rely on the very last one to win the game.”

Although the Cats were able to finish down the stretch against Illinois last season, the team has been struggling lately to finish games. NU is on a two game skid, dropping its last two matches to Penn State and Indiana. Although the Cats held the lead in both contests, they couldn’t close the door on their opponents, losing by 4 points in both games.

“We have to focus on the little things throughout the entire game and not have to fight our way back in the last two or three minutes,” Roser said. “Our defense, we’ve been working really hard on in the past couple weeks so hopefully we can pick that up and stop Illinois.”

Illinois is a powerhouse on offense, ranking second in the Big Ten for scoring with an average of 73.2 points. The Fighting Illini are led by senior Karisma Penn, who is tied for 3rd in scoring in the Big Ten and averages 20.5 points per game. She also ranks 1st in rebounding, averaging 10.8 rebounds per game.

“They have a lot of people that can score,” coach Joe McKeown said. “They’re not just dependent on one player. (Penn) is having a great year. You want to limit some of the things where she can hurt you.”

In addition to Penn, the Cats will have to find a way to shut down the Illini offense as a whole. Penn averages about 54.5 percent from the field, ranking 3rd in the Big Ten while Moore is a whopping 90.3 percent from the foul line and ranks 2nd in Big Ten.

However, the Cats have shown that they can hang with the big dogs, proving a resiliency and energy that will only help in the game against Illinois. The Cats are 6-2 at home so far this season. Roser leads the team in shooting percentage, shooting 47.6 percent from the field, and Hackney averages more than 14 points a game.

“We want that confidence of winning to carry us through because we know we can compete,” Hackney said. “If we can just compete and do the best we can, it’s going to be a really good year for us.”