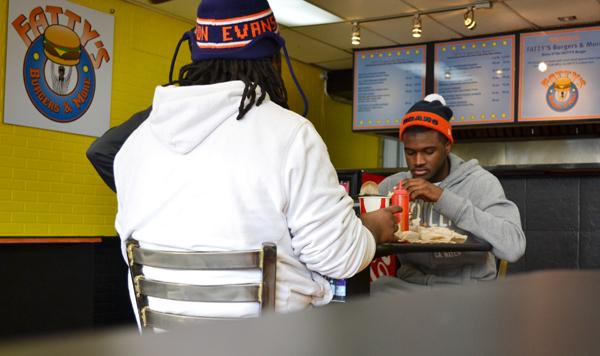 One of Fatty’s main priorities is to develop a relationship with ETHS students, said Vincent Pryor, the restaurant’s owner.

To cater to high school students, Pryor said the restaurant, located at 1903 Church St., is developing an online ordering system that will students to order their food and pick it up during lunch breaks, he said. He added they can also call in their orders and eat on the premises.

So far, Fatty’s has been able to attract a large customer base. The motto, “Bigger Better Burgers,” is printed in bold white letters across the restaurant’s window.

Since the opening in December, Pryor said customers have mainly been residents from the nearby neighborhood, although the target audience is Evanston students.

ETHS student Tim Huff ate at the restaurant for the first time Tuesday. He said he heard about Fatty’s from friends and did not really know what to expect going in.

The restaurant, which was started in Texas, does not run major advertising campaigns, Pryor said. Instead, he said, Fatty’s lets the burger speak for itself.

“That’s kind of our thing,” Pryor said. “No pomp, no circumstance.”

The restaurant moved in to the space vacated by Bop N Grill in October. Bop N Grill now operates a location in Rogers Park.

Another one of the business’s first priorities, Pryor said, was hiring employees. All current employees at Fatty’s new location are Evanston residents.

The restaurant may seem small from the inside, but clients seem to feel right at home, Pryor said. Sharing just four tables, customers get an experience Pryor said he hopes feels like a family dining room. On the yellow walls, guests will find Chicago sports memorabilia and a TV that constantly broadcasts sport networks.

With a Northwestern football jersey framed on its wall, the restaurant also aims to serve NU students, Pryor said.

“As our reach expands till we get to the grand opening phase and we see what people in Northwestern want, we will be able to cater our business for that,” he added.

In the meantime, Fatty’s is focusing on improving their burgers based on response they get from clients, Pryor said.

The original Fatty’s Burger is a simple burger with only a bun, meat and condiments. With a square bun and freshly pressed meat, the usual burger comes with mayonnaise, ketchup and mustard. Specialty burgers include the Unbelievable Blue Cheese Burger and The Batter-Up Bacon Burger. The cult favorite, however, is The Lineman Burger, a one-pound burger with extra cheese, Pryor said.

The first thing that struck 19-year-old Huff about his original burger, though, was its size.

“I’m surprised that the burger is so big,” he said. “It looks good, and they make it fresh to order.”

Clients have to wait about 10 minutes for the burger to be done, a wait that is “worth it,” Pryor said. All ingredients are shipped fresh from Texas.

The restaurant is currently going through a soft opening, but Fatty’s grand opening will be on Feb. 1. Pryor said he is very happy with the response he has gotten from clients so far. After opening a branch in Lincoln Park, he said Evanston was the next best location.

“Everybody loves the burger,” Pryor said.