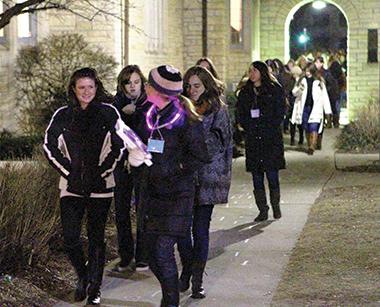 For the Interfraternity Council, this year’s recruitment will look a little different.

Formal recruitment began Tuesday for IFC, as 16 of the organization’s chapters were free to offer their first official bids. Panhellenic Association recruitment kicks off today and runs through Tuesday, when women will receive their bids.

On the men’s side, the North Campus quad will offer a reshuffled set of options from a year ago. Gone are Chi Psi and Sigma Phi Epsilon, and Delta Tau Delta will participate in formal winter recruitment for the first time since their return to campus last year.

Weinberg senior Andrew Brugman, IFC’s vice president of recruitment, wrote in an email to The Daily that 175 men accepted bids Tuesday night, down from 225 a year ago but up from 156 in 2011.

Delt president Ani Ajith said six new members accepted bids to the chapter Tuesday night. He expressed optimism about the way the rest of the week would go for the nascent group, praising IFC, the University and Delt nationals for their support in helping the chapter establish a campus presence.

“The process of getting your name out there and having each member of the fraternity make a personal investment in recruiting, that all takes time to develop and to build the tradition of recruitment,” the Weinberg junior said.

Ajith also credited NU and IFC with helping Delt organize recruitment without an on-campus house. The chapter will not have an official residence until next Fall, when Pi Kappa Alpha will vacate their Delt-owned building and move next door to Goodrich House.

“Obviously we are disadvantaged not having a house,” Ajith said. “It helps tremendously when you have the infrastructure in place to host large events and large numbers of people, and having a house really, really helps in that regard.”

Delt is currently conducting recruitment activities out of the University Career Services building on the northwest corner of campus. Last year, after formal winter recruitment, representatives from the chapter’s national fraternity came to conduct interviews with potential new recruits, a process that Sigma Nu and the now-vacant Sig Ep will be pursuing this winter.

Spencer Montgomery, a leadership consultant with the national Sigma Nu fraternity, said Sigma Nu always conducts the process when starting anew at a school. The chapter is returning after leaving campus in 2004. Montgomery shrugged off concern that men interested in Greek life would be unavailable to Sigma Nu after already accepting bids this week.

Despite disaffiliating all of its members following a membership review this fall, Sig Ep will not be leaving campus or the IFC. Instead, national representatives will be coming to NU this week, and the chapter will participate in some of the activities of formal recruitment, Sig Ep’s director of fraternity operations Andrew Lemens told The Daily on Tuesday. The headquarters began informational meetings on campus Wednesday and they will continue Thursday, according to the IFC website.