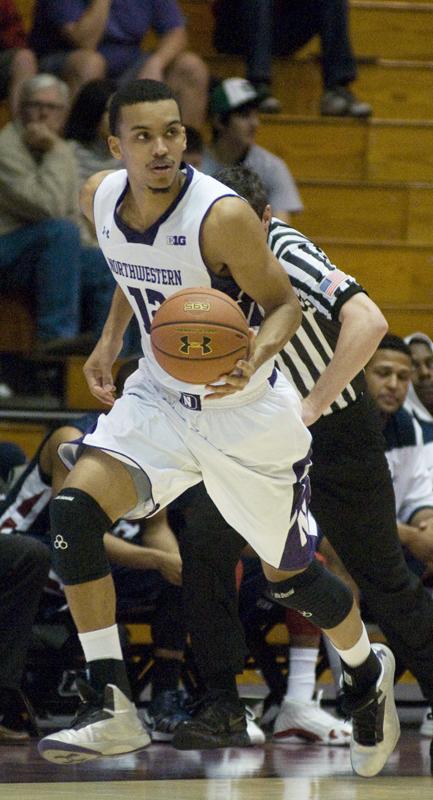 Graduate student Jared Swopshire dribbles up the court. Swopshire and the Cats struggled after injuries to seniors Reggie Hearn and Drew Crawford.

On Dec. 14, NU announced senior Drew Crawford would miss the rest of the season with a torn labrum. The forward was expected to be a major factor in the Cats’ pursuit of an NCAA Tournament bid, and his injury news was received poorly by fans. Crawford reaggravated a previous shoulder injury in September and tried to play through it but got off to a slow start and his shoulder was not responding well to treatment, which forced him to have surgery. He is expected to apply for a medical hardship waiver from the NCAA after appearing in only 10 games this season.

Just three days later NU hit the court again to face Texas State and pulled out a sloppy 74-68 win. The Cats trailed by 6 points with three and a half minutes remaining but closed on a 12-0 run to reclaim the lead and hold on for the victory. Coach Bill Carmody played seven players for more than 10 minutes, and four players scored in double figures to help pick up the slack from the 13.5 points per game the team lost from Crawford. Sophomore guard Dave Sobolewski led the Cats with 18 points, and senior guard Reggie Hearn added 15. Freshman Alex Olah emerged as a passing threat in the middle as the center dished out 7 assists to go along with his 8 points.

NU’s biggest test of the break arose in the next game, when Stanford came to Evanston. The Cardinal gave up the opening basket and subsequently hit a 3-pointer to take the lead. NU would never lead again as it fell to Stanford 70-68. The lead got as big as 18 points in the first half, but the Cats closed the half on a 17-3 run over the last seven minutes to keep the deficit manageable at halftime.

NU eventually worked to tie the game at 67 with one minute and 50 seconds left, but Stanford hit a 3-pointer and NU missed four shots to give the Cardinal the win. Hearn scored 18 points and grabbed 7 rebounds to lead the Cats, but he injured his ankle in the beginning of the second half and missed the final 16 minutes of the game. Olah continued his strong play with 16 points and 5 rebounds and redshirt freshman Tre Demps scored 12 points in relief of Hearn.

The Cats’ final game of December was their most dominant performance of the break. NU scored the first 15 points in the game and never looked back, defeating Brown 63-42. The lead was only 10 at halftime, but another big run in the second half gave NU a comfortable win.

Hearn missed the game due to his ankle injury, but it did not matter as eight different Cats scored points, led by Sobolewski’s 14. Five players scored 8 or 9 points, and NU had a lot of confidence headed into Big Ten play. The Cats shared the ball well against the Bears and had 21 assists on 23 baskets including 8 from Sobolewski, 4 from senior guard Alex Marcotullio and 4 from senior forward Jared Swopshire

In the Big Ten opener, NU was demolished by Michigan 94-66. Hearn missed the game with the Wolverines as well but returned for Sunday’s loss to Minnesota.