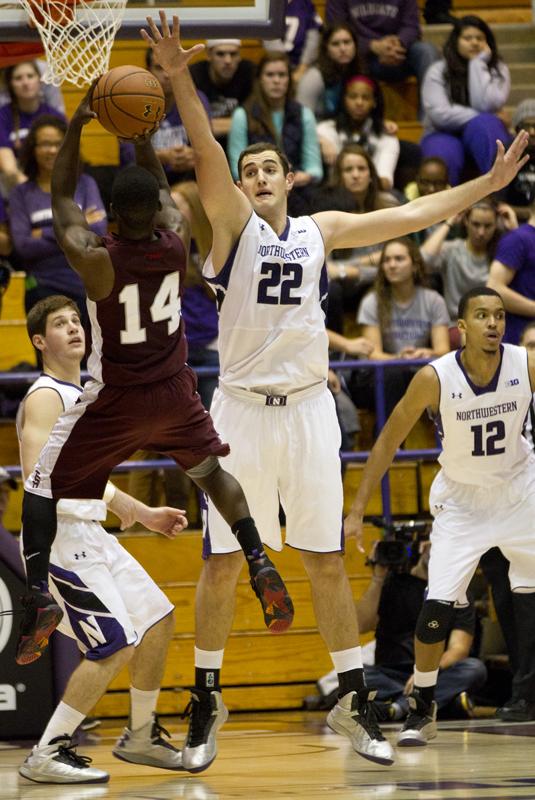 Alex Olah (22) attempts to block a shot. The center played 24 minutes in Sunday's loss to Minnesota.

After Northwestern’s Jan. 3 loss to Michigan at the start of conference play, coach Bill Carmody admitted his team’s strength is not quick shooting. Not wanting to suffer another near 30-point loss, Carmody acknowledged something had to change.

Although the Wildcats cut their losses and fell to Minnesota by only 18 points with a slower, more controlled offensive plan, Sunday’s loss demonstrates that tempo control may not be the solution Carmody’s young team needs.

Defensively, NU did their job during the first half and held Minnesota to 33.3 percent shooting, but was unable to stick with the gameplan when, after four minutes in to the second half, the Golden Gophers put up 23 points in about seven minutes, compared to the Cats’ 5.

Senior guard Reggie Hearn described the second half defensive fall-out as something akin to panic.

“In the first half, we executed the gameplan like we talked about,” Hearn said. “Once the game started to get out of hand in the second half, we got a little antsy and put up a few quick shots.”

During that seven-minute stretch, all four Minnesota players who were fouled made both free throws (guard Austin Hollins missed one, off of which forward Rodney Williams got the rebound and made a layup), Hollins made four three-pointers and forward Trevor Mbakwe made his second dunk of the night.

Especially since the Cats depended on two freshmen – center Alex Olah and guard Kale Abrahamson – to play 24 and 29 minutes, respectively, holding off the Golden Gophers defensively, then turning around and possessing efficiently on offense for 40 minutes would have been quite a feat for the Cats on Sunday.

The Golden Gophers shot 59.3 percent during the second half when the Cats started to crumble defensively. But, when NU started to rattle off quick shots, the team ended the half having taken 34 field goals as opposed to the first half’s 18. The Cats shot 44.1 percent in the second half.

After the Minnesota game, Carmody said offensive control is key to winning in the future.

If NU can combine its first-half defense and open up offensively as it did during Sunday’s second half, it might find a winning formula. The problem could be consistency with shooting.

“We learned we have to control the game with our offense,” Carmody said. “This isn’t the team it’s been the past few years where if we got an open look we were pretty proficient in knocking them down … We just have to continue (running our offense) and try to get our shots that guys can make.”

In bits and pieces, NU has shown it can do it all – efficient offense and strong defense. Playing for a full 40 minutes to avoid a 10-point hole like the one NU fell in at the start of the Michigan game or staving off a 23-point run at the start of the second half would help the Cats not only on the scoreboard, but with boosting their confidence – crucial for a young team reeling from veteran players’ injuries.