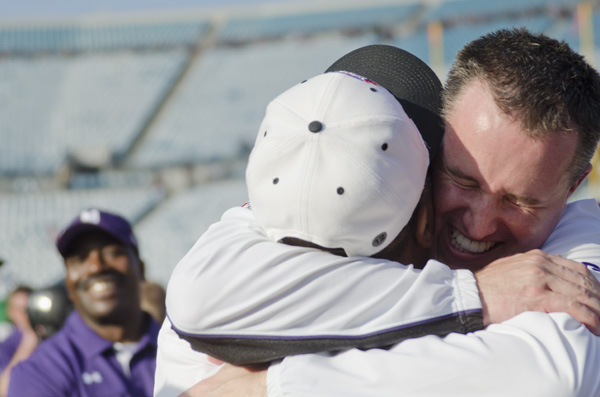 There was only one lingering negative surrounding Northwestern football — a 64-year stretch of no bowl wins.

That all changed Tuesday, when the Wildcats used a stifling pass rush and a resilient quarterback duo to defeat Mississippi State and win the 2013 Gator Bowl.

After having been in four losing locker rooms after the past four bowl appearances, senior offensive lineman Brian Mulroe said he wanted to see a change this year. Today’s post-game celebration lived up to his wildest dreams, as the Cats destroyed the monkey doll Fitzgerald had introduced last year to symbolize the monkey on the team’s back the bowl drought represented.

“It was great,” Mulroe said. “Everyone was hugging each other ripping up the monkey and it was awesome. It was just what I expected and I’m glad we were a part of it this time.”

The game itself could not have started better for the Cats. NU forced three interceptions and two 3-and-outs in Mississippi State’s first five possessions, jumping out to a 13-0 lead. The first interception came from senior Quentin Williams. He was trying to avoid the offensive tackle’s block when he picked off Bulldogs’ quarterback Tyler Russell on the third play from scrimmage and took it 29 yards for a touchdown.

NU lived off the big defensive plays all game, turning four Russell interceptions into 17 points. The Cats sacked Russell three times and had six tackles-for-loss as a team, which frustrated the Bulldogs’ offense. Mississippi State had less than 300 yards of offense, including just 106 yards through the air.

“I don’t know who didn’t make a play on defense today,” senior linebacker David Nwabuisi said. “It was incredible. Plays were coming from everywhere. As a defense we compete to see who can make the most plays and truthfully we have no idea.”

The defense played well on a day that offense ran into some uncharacteristic issues. Junior quarterback Kain Colter and sophomore Trevor Siemian combined for three interceptions, one fewer than they had all season. The Cats run game, which came in averaging nearly 231 yards per game and an average of five yards per carry, was held to just 161 yards and four yards per carry. Junior tailback Venric Mark, NU’s first 1,000-yard back since 2006, only picked up 56 yards on 13 carries, but he did score the game’s final touchdown on a three-yard plunge in the middle of the fourth quarter.

It was the passing game, which had struggled for most of the season, that lifted the Cats to victory. The biggest drive of the game came early in the third quarter, after Mississippi State tied the game at 13 and NU got the ball back. Colter and Siemian both threw incompletions, and it was third-and-10 from NU’s 24-yard line. On the third-down play, Siemian evaded the pressure from the defensive line and floated a pass off his back foot to junior receiver Rashad Lawrence for 13 yards and the first down. Siemian hit senior Demetrius Fields for 27 yards on the next play and immediately found freshman superback Dan Vitale on the subsequent snap for 34 yards to get the ball to the Mississippi State 3-yard line. Senior running back Tyris Jones punched it in from there, and in just four plays the Cats went 76 yards to reclaim a lead they would never surrender.

“It was big,” Siemian said of the drive. “The guys on the outside stepped up and made some plays. Those guys have been capable all year and they’ve done a really great job at capitalizing on their opportunities when they’ve gotten them.”

Siemian once again played the role of savior for NU. After leading comebacks earlier this season, Siemian also saw extended playing time in the Gator Bowl. He threw 20 passes and even showed some speed with two runs for 14 yards. His most shocking play surprised everyone in the stadium, himself included. Siemian ran the read option with junior Mike Trumpy and for the first time in his career held onto the ball and waltzed into the end zone from four yards out to give the Cats a 14-point lead.

“We really felt like both (Siemian and Colter) were playing at a high level at the end of the season,” Fitzgerald said. “We were kind of tipping our hand a little bit towards the end of the year, if Trevor went in we felt like we were seeing some things than when Kain was in. We wanted to get both guys on the field and doing some things (we hadn’t done before).”

Obscured by all the bowl celebration is Fitzgerald’s 50th victory, which makes him the winningest coach in program history. He called the title “very humbling,” deflecting credit to his players and coaches for helping him achieve this honor. He singled out defensive backs coach Jerry Brown for his 119th win as an NU assistant coach, calling Brown the true winningest coach in NU history. Despite his humility, players were quick to point the attention back to Fitzgerald.

“He deserves it,” Mulroe said. “He’s the greatest coach I’ve ever played for. For years to come he’s going to go down as one of the best ever. Just the way he prepares everyone and how he cares more about the person than the player … that’s why we love him to death.”

Mississippi State’s final offensive drive was an exclamation point on a dominating defensive performance. The defense bookended the drive with sacks while stuffing a running play and forcing an incompletion between. The bench was going crazy and the fans felt the win was imminent.

After Williams sacked Russell on the fourth down and NU took over on offense, the unit jogged out there to line up in victory formation. Mulroe knew the Cats had the game in the bag, but it did not sink in until the clock hit triple zeros.