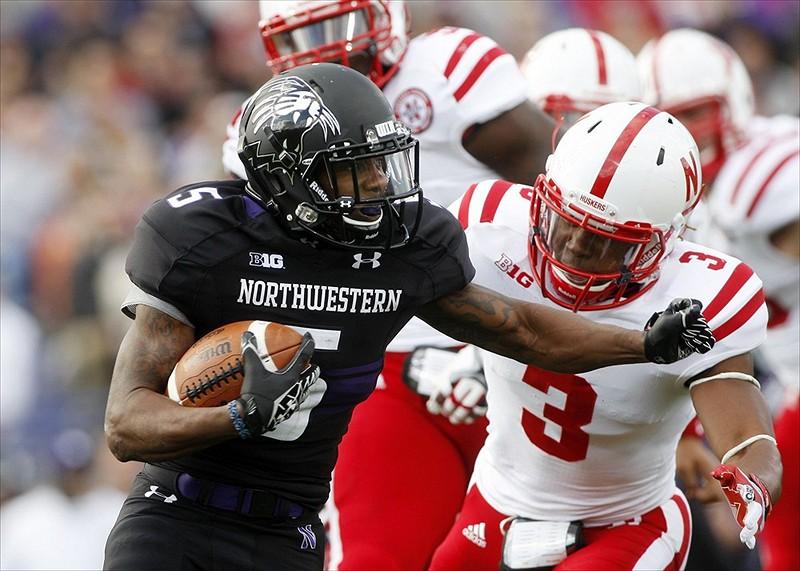 Northwestern running back Venric Mark became the 15th player in NU history to rush for 1,000 yards in a season. However, it was his two punt return touchdowns which earned him a spot on the Football Writers' Association of America All-American team this season.

With the lull in college football action as we all eagerly anticipate the bowl season, I’ve had to get my pigskin fix exclusively from the NFL for the past few weeks. Admittedly, watching Tom Brady, Robert Griffin III and Peyton Manning torch hapless secondaries in this new, pass-happy league is shamefully entertaining for a lover of “old-man football” such as myself.

So I’m embarrassed to admit that when asked to give my pick for the Wildcat’s Most Valuable Player this season, it took me a few moments to come up with the name. My thoughts initially jumped to quarterback, then to wide receiver.

Without any question or debate, Northwestern’s MVP  this year is junior running back Venric Mark. After an up-and-down start to his career with the Cats, Mark exploded onto the scene this year, rushing for 1,310 yards and 14 total touchdowns while sporting a ridiculous average of 6.2 yards per carry, all en route to being named an All-American.

It was an historic season for Mark and the Cats, as he recorded only the fifteenth 1,000-yard rushing season in program history, the first since Tyrell Sutton in 2006. And what’s more impressive is that he did it without much help on offense.

With possible exceptions against Syracuse and Indiana, NU’s passing game was absolutely abysmal all year. Kain Colter and Trevor Siemian combined for fewer than 2,000 yards through the air and struggled to keep the offense in a consistent rhythm. Whether the fault for that lies with Colter and Siemian for poor play or with the coaching staff for misusing the two is irrelevant. The offense still managed to put up points thanks to Mark’s unbelievable season.

Game after game, opposing defenses knew that stopping Mark meant stopping the Cats’ attack, yet the speedy junior churned out one eye-popping performance after another, at one point stringing together four straight games of at least 100 yards before an injury against Michigan State kept him from extending the streak to five.

Whenever NU found itself floundering on offense, a big play by Mark provided all the spark the Cats needed to get going, and his electrifying returns and game-breaking rushes often swung momentum in NU’s favor. No, these gaudy stats didn’t come in garbage time, and that’s how you define an MVP: a player who was at his best when the lights shined brightest. Mark certainly was this season.

The Cats have an opportunity to break their bowl drought against Mississippi State in the Gator Bowl in a few short days. It’s Mark, not a superstar quarterback or a big-time receiver, who will have to carry NU to the Promised Land. Perhaps I’d be concerned if this was the NFL, but it’s not. And I feel just fine.

There is no doubt Mark and his breakout season provided a major storyline for NU this season. The numbers were impressive and helped give the offense an entirely different dimension.

However, before the season, we knew the offense would be the strength of this team. We knew coach Pat Fitzgerald and offensive coordinator Mick McCall would find a way to incorporate all of the different offensive weapons into a cohesive offensive game plan. Sure, it was shocking to see the Cats run the ball twice as much as they passed it, but it was working.

The true issue with this team heading into the season was the defense, more specifically the secondary. This year, there was a defensive revival at NU, and it was all led by the Cats’ MVP, sophomore safety Ibraheim Campbell.

Campbell was named a freshman All-American last season after leading the Cats with 100 tackles. However, his pass-defense statistics were not all that stellar despite playing in the secondary. This season, he is still a tackling machine with 85 stops, but he has also played exponentially better against the pass. He leads NU with 12 passes defended and an impressive 11 pass breakups to help the Cats limit teams to about 5 fewer points per game compared with last year.

More importantly, Campbell is the most experienced defensive back — as shocking as that may sound — and was able to make those around him so much better. Players such as sophomore cornerback Daniel Jones and senior safety Jared Carpenter played the best football of their careers this season, and both of them attributed some of their success to Campbell’s leadership ability.

NU’s defense could always count on a big play from Campbell when it mattered the most, and those big plays usually coincided with big momentum swings in the Cats’ favor. The most recent example of this sort of play came against Michigan State, when his blitz startled Spartans quarterback Andrew Maxwell and forced an errant throw that senior linebacker David Nwabuisi intercepted and returned for a touchdown. That momentum swing allowed NU to take a lead it never relinquished.

The point of the matter is that as much as Mark was an explosive threat on offense, that side of the ball was never a serious issue. Everyone had their eyes on the defense this year, and Campbell led the unit to its best season in a long time.

This is the fifth installment of The Daily’s Road to Jacksonville series leading up to the Gator Bowl on New Year’s Day. Check back Saturday when assistant Sports editor Rohan Nadkarni shares why Mississippi State can win the Gator Bowl.