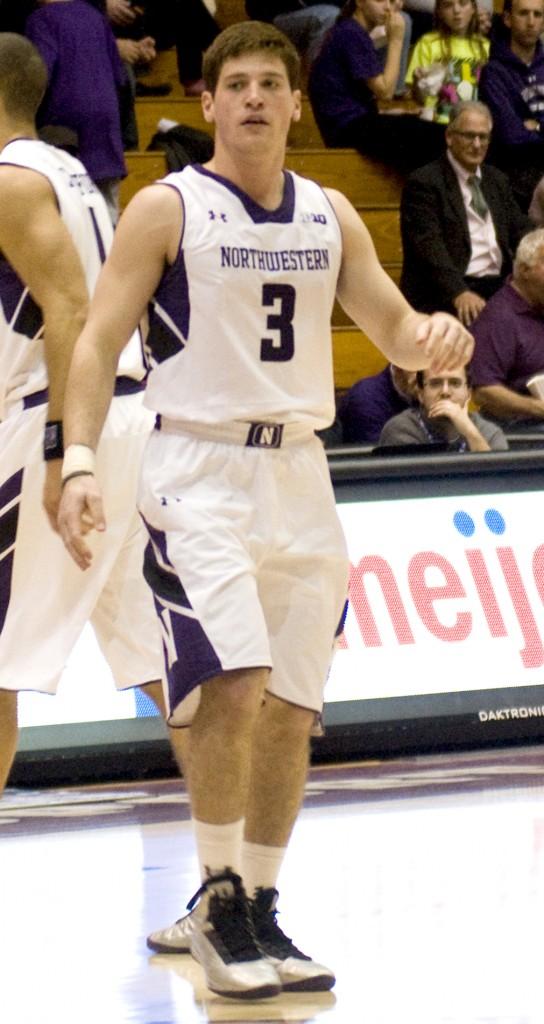 Maryland beat Dave Sobolewski and the Wildcats on the boards Tuesday, which lead to a lopsided loss. The sophomore guard said the team is focused on improving against UIC.

The Wildcats’ loss Tuesday was nothing more than a bad second half.

Despite some speculation, sophomore guard Dave Sobolewski said the Cats’ battle against the Terrapins was not a statement game but rather just a tough loss against an ACC team.

“It’s not the end of the season,” Sobolewski said. “It was nothing more than a loss in November.”

The Cats trailed the Terrapins by only 2 points after a relatively even first half. But the last 20 minutes told a different story when, as Sobolewski put it, “it all went downhill.” NU struggled to put the ball in the net and was outscored 49-31 in the second half.

“I think it was maybe just a lack of concentration (and) lack of focus on our part,” senior guard Reggie Hearn said. “Like Dave said, in the first half, I think we executed very well defensively, but for some reason in the second half, we didn’t come out focused and take care of business like we did the first half.”

NU finished the game shooting a mere 18-of-53 from the field and 6-of-25 from the 3-point line, and the Terrapins crashed the boards on almost every missed shot. Maryland finished with an impressive 47 total rebounds, which was more than double that of the Cats.

Coach Bill Carmody attributed the Terrapins’ ability to snag so many rebounds to the Cats’ over-eagerness to pull the trigger on their shots, something the team is working to improve.

“We were shooting the ball too quickly,” Carmody said. “When you have a pretty decent shooting team and you’re open, you feel pretty good about that, but they just weren’t going down.”

The Cats have their work cut out for them as they face University of Illinois-Chicago (5-1) on Saturday. The Flames are on a four-game win streak, beating Northern Illinois 58-46 on Tuesday in their first win on the road this season. Four UIC players scored in the double digits and the team is off to its best start in nine years.

With final exams fast approaching, however, the Cats have had a full schedule lately but are still working hard to bounce back from Tuesday night.

“You know, the way our schedule’s been, it’s been pretty hard to practice to tell you the truth,” Carmody said. “It seems like we’ve had a game, and then a day off, and we might have one practice but (it’s) in preparation for a team. On Friday, (we’ll) spend a lot of time on UIC because they look pretty good this year.”

The Cats know that they have to improve on the boards for Saturday and that it will have to be a collective effort. Although the Flames are not the rebounding machine that is Maryland, they still managed 34 rebounds in their win Tuesday night.

“It (rebounding) doesn’t even all fall on our bigs,” Sobolewski said. “It falls on guards just as much. The guards have to stick their nose in there and see if they can pull out some long rebounds or rebounds that hit the floor. It was just a horrible effort on the boards by the whole squad.”

However, NU has been using Tuesday’s loss as a learning tool to ensure Saturday will not be more of the same.

“We got a lot of work to do for sure,” Sobolewski said. “We’re not going to stop working, and if anything, this will make us hungrier to improve every day in practice.”