Music Review: Rihanna is ‘Unapologetic,’ but she shouldn’t be 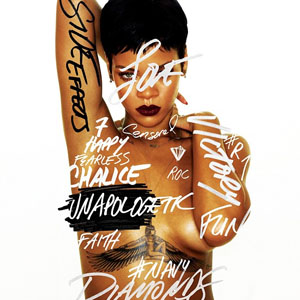 If you’ve been around a television or computer lately, you’re aware that Rihanna released a new album. “Unapologetic” is her follow-up to last year’s “Talk that Talk,” a successful record that churned out six chart-topping singles, including “We Found Love” and “Where Have You Been.” Promotional work for this album includes Rihanna’s appearances on “Saturday Night Live,” “The Ellen Degeneres Show,” the “Victoria’s Secret Fashion Show” and her recent embarkment on the 777 Tour. Unfortunately, listening to “Unapologetic” reveals Rihanna seems to have put more effort into promoting the record than producing it.

The theme of the record is controversial. On the album cover, which was officially released in October, Rihanna appears nude, sporting dark lipstick and a provocative, super-short hairdo. At face value, it is as if Rihanna has another hit record under her belt. She employs the help of popular vocalists Eminem and Chris Brown (as well as Kanye West on the official remix of “Diamonds”), up-and-coming rapper Future, indie singer Mikky Ekko and dance powerhouse David Guetta. However, the tracks in the album are generally of sub-mediocre quality and lack consistency other than in theme, which hangs by barely a thread.

The songs change genres as sporadically and frequently as Rihanna changes her image. “Unapologetic” opens with the urban banger, “Phresh Out the Runway,” which deviates from the annoyingly catchy dance-pop tunes from her previous album and instead packs excessive synthetic sounds into the song. The result is three-and-a-half minutes of utter confusion.

The next song, “Diamonds,” which is also the album’s first single, seems misplaced as a mid-tempo ballad surrounded by beat-driven tracks. That said, it is one of the better songs on the album.

One would expect that her collaboration with Eminem on “Numb” would be a happy reunion recalling the “Love The Way You Lie” era. Instead, the rapper’s verse serves as the only redeeming quality to Rihanna’s meaningless and repetitive lyrics. The rest of the album plays similarly, with unpleasant, thumping beats dominating many of the songs.

The most controversial song, by far, is the singer’s duet with her abusive ex-boyfriend, Chris Brown. The piano house track revamps (and taints) Michael Jackson’s classic, “The Way You Make Me Feel.” The lyrics tell of the pair’s on-and-off romance. However, it seems ironic they boast of a relationship that is “Nobody’s Business,” when Rihanna blatantly uses the controversy surrounding her poor decisions to promote the album. For moral reasons alone, I disapprove of this song.

The only songs from the album I will voluntarily listen to are “Jump” and “Stay.” In “Jump,” Rihanna explores the dubstep genre with the first by enlisting producers Chase and Status and samples Ginuwine’s “Pony” in the chorus. It sounds vaguely reminiscent of Magnetic Man’s 2010 dubstep smash “I Need Air” and has the potential to become a Top 40 single. The second bearable song on the album, “Stay,” debuted on “Saturday Night Live.” A piano-driven ballad, the song shows Rihanna’s vulnerable side. The absence of heavy beats in this song provides a refreshing intermission.

You don’t need to be a Rihanna fan to be disappointed with the mess of an album “Unapologetic” is. The release of seven albums in seven consecutive years is an impressive feat for any artist, but it seems the singer has either lost her touch from the golden days of “Umbrella,” or just decided not to bother with this album.