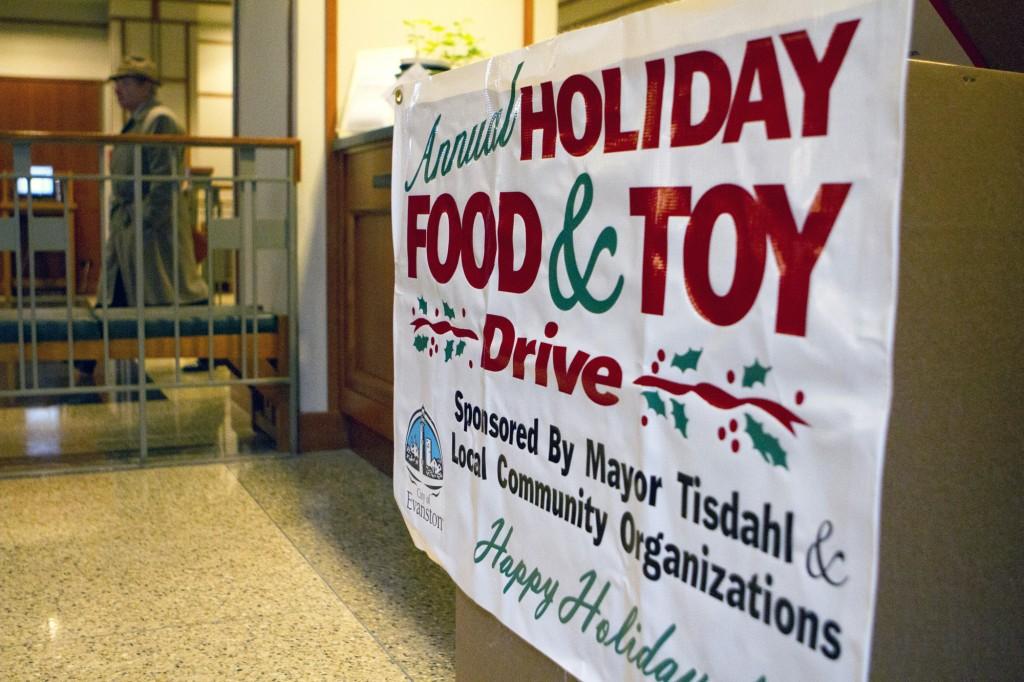 Evanston's annual Holiday Food and Toy Drive, sponsored by the city and local community organizations, has nine drop-off locations, including this spot at the Evanston Public Library on Orrington Avenue. Residents can bring new toys and non-perishable food items to the different drop-off sites or make donations online through Dec. 14.

As the holidays approach, nonprofit organizations around Evanston are going into overdrive to collect food, clothing and gifts for their clients.

The holiday season brings an inundation of volunteers and gifts compared to other months of the year, even though the need doesn’t subside immediately after New Year’s Day. Lisa Todd, community relations manager of Connections for the Homeless, said her organization stores donations received during the holiday season for other months.

“This is the time of year when we’re going to receive the bulk of our support,” Todd said.

Connections is an organization that works to prevent homelessness, provide housing services and develop employment resources.

This year, clients will celebrate the holiday season through the Gift of Giving program, Todd said. She explained the program, which began last year, matches Connections clients with donors who then purchase items they need for their homes.

“Last year, it went a long way in making people feel like they weren’t isolated,” Todd said. “It also helped them cover some really basic start-up expenses, whether that was a set of sheets, a blanket for their bed or a coffee pot.”

YWCA Evanston/North Shore is also collecting gifts for women and children who have escaped from domestic violence and now live at the shelter, said volunteer coordinator Trimmy Stamell. She explained the collection has likely happened every year since the shelter opened more than 30 years ago.

The YWCA is collecting toys for children, ranging from infants to 13-year-olds. Mothers living at the shelter will have the opportunity to pick gifts for their children when the organization displays them like a “toy shop,” Stamell said.

“We think it’s more respectful if each mother gets to choose the gifts she wants to give her children,” Stamell said.

Stamell said the organization generally receives an outpouring of gifts for the children at the center and often passes on extra toys to other needy families in the community. However, gifts for the women, such as bath sets and pajamas, are always in demand, she said.

“The holidays remind us all how lucky we are,” Stamell said. “It’s a time to reach out and make their holiday better at a time when they need it.”

The gift drives at Connections for the Homeless and the YWCA are just two of many holiday efforts to raise support in Evanston. On Friday, the city will host the Holiday Bash and tree lighting festivities, where many organizations will remind Evanston residents to think of those in need as they begin the holiday season.

During the event, Whole Foods Market will collect coats for the Evanston School Children’s Clothing Association. The Rotary Club of Evanston Lighthouse will host a holiday wreath and fresh fruit sale at the event to fund local and international projects. The Rotary Club’s recent local projects include donations to Connections for the Homeless and ESCCA, according to club president Jay Vaught.

“We see it as a great event to let the people who come to the event to be more aware of what we’re doing in the community,” Vaught said.

Todd said organizations like Connections expect this increase in donations and volunteering throughout November and December.

“The nature of the holidays lend themselves to reflection and recognizing what you have,” Todd said.

She added the climate of the Chicago area also contributes to the increase in donations during the early winter.

“It’s easier to be empathetic when they themselves are feeling cold,” Todd said. “You’re more likely to think, ‘What is somebody doing who can’t go inside a house tonight?’”