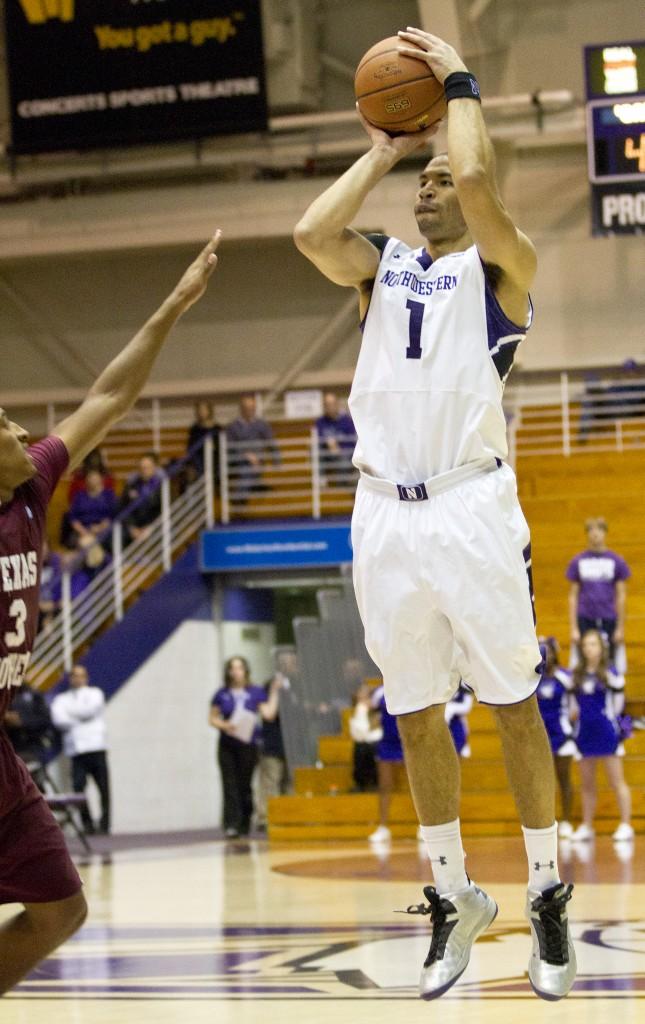 Northwestern forward Drew Crawford attempts a shot during Tuesday’s game against Texas Southern. Crawford led all scorers with 20 points as the Wildcats routed the Tigers.

“I believe that we will win!” chanted the crowd at Welsh-Ryan Arena on Tuesday night. And the Wildcats did just that.

Northwestern (1-0) took on Texas Southern University (0-2) in its first game of the regular season, trouncing the Tigers 79-49.

“We had one day to prepare,” Texas Southern coach Mike Davis said, referring to the team’s game at Boise State on Sunday. “And you need a week to prepare for this, especially for our guys. And all we were trying to do was just trying to take away the lay-ups and hoping they didn’t make shots. (But) they just played the game. We couldn’t make shots. We shot it poorly. We missed layups, missed free throws, just chased them around.”

The Cats completely controlled the first half. NU managed to keep TSU out of the lane and forced the Tigers to take shots from the perimeter. TSU struggled to put the ball in the hoop and went 1-11 from beyond the arc and a mere 6-29 from the field.

On the other hand, the Cats, led by senior forward Drew Crawford, had an explosive first half. After winning the tip, Crawford scored in the first four seconds of the game and made each of his first eight field goal attempts. He finished the first half with 20 points, which included a dunk and four 3-pointers.

“Shurna’s gone and it’s on him now a little bit more,” coach Bill Carmody said. “When they were sagging and the shot was open, I’ve seen that before. I’ve seen it in practice. I’ve seen it in some games. He gets in a groove, and that thing is smooth. There’s no hitch to it and it goes in a lot.”

Despite dominating the first 20 minutes, NU came out a little slow to start the second half. In just the first four minutes, the Cats committed four turnovers, which tied the amount they had for the entire first half. However, the team never relinquished its lead, which was 37 points at its largest when freshman center Alex Olah hit a 3-pointer – a shot Carmody said he doesn’t “want to get too used to (seeing).”

A little less than midway through the second half, freshman forward Kale Abrahamson scored 8 points in 66 seconds off of a baseline drive and two 3-pointers as the Cats shut the door on the Tigers.

“He can make shots,” Carmody said. “And he’s got to calm down too because he’s excitable also. But he gives you a little different dimension out there.”

Abrahamson finished with 15 points and four rebounds in his first collegiate game and after such a performance, people are already starting to wonder if he’s the next John Shurna, NU’s star forward who graduated in the spring.

“I try to stay away from comparisons like that at this point,” Abrahamson said. “Those are some pretty big shoes to fill. They say my shot looks like his. I tend to disagree but it’s whatever. It’s an honor to be compared to him (Shurna) anyway.”