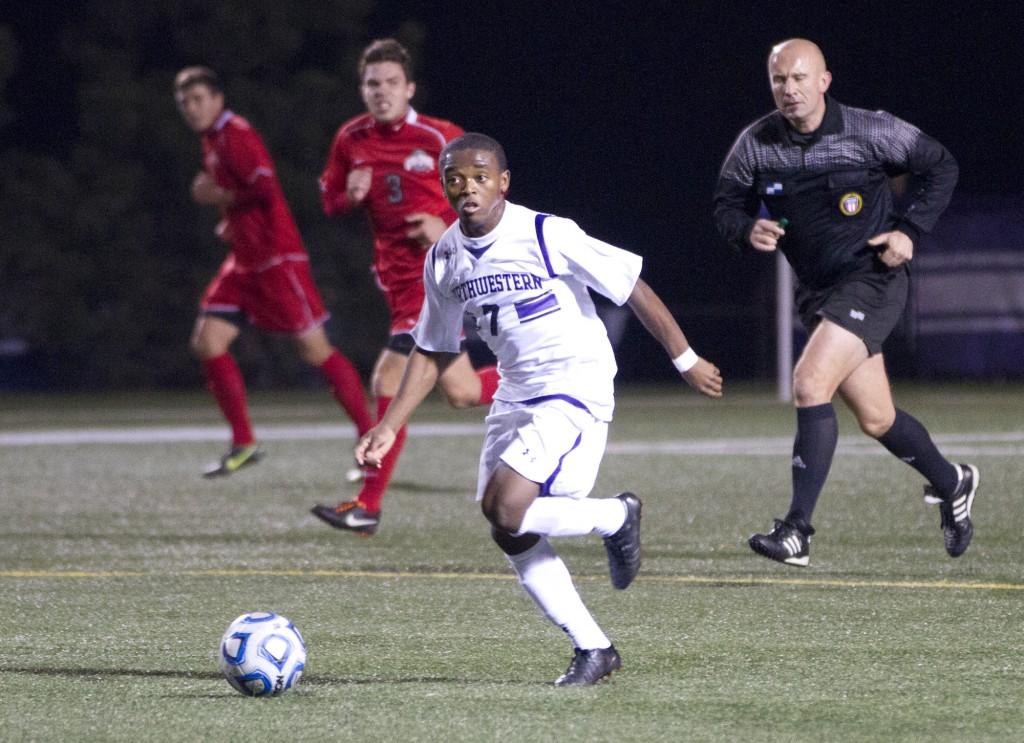 Northwestern midfielder Lepe Seetane traveled a long path that has led him from Lesotho to the Wildcats’ starting lineup. One of the headlines of a strong recruiting class, Seetane’s time with the team has been as impressive as it was unlikely.

When Lepe Seetane finally broke the news of his looming departure to his boarding school friends, nobody believed him.

“They all looked at me and just said, ‘Just stop’,” Seetane recalled. “The day before I said, ‘Guys, I’m really leaving tomorrow morning,’ and they said, ‘OK, we’ll see you tomorrow.’”

Seetane was trying to leave a place where opportunities are rare for 14-year olds. Dreams were often doused in a culture of doubt.

But the doubters are left to gaze at the magic that the midfielder brings to Evanston. He has electrified the Northwestern faithful and a squad that won the regular season and Big Ten Tournament titles in 2011 and a tie of the regular season title in 2012. Though he remains focused on taking his team to new heights, Seetane never forgets his starting point.

Lesotho is nearly impossible to find on a map. The Republic of South Africa engulfs the tiny, mountainous country with a population of 2.2 million. Crime — home invasions in particular — is extremely high. Life expectancy in Lesotho is now at 48 years, the second lowest in Sub-Saharan Africa. For every 20,000 people, there is one doctor. Just seven percent of households have electricity, while 12 percent have running water.

As Seetane battled the odds at home, there was soccer, something that clicked with him at a young age. His father coached a local team and a young Seetane would tag along for games.

“It really inspired me to pick up a ball and start playing,” Seetane said. “Especially when you are around the game that much, you know the ins and outs of the game and get involved with it.”

Seetane’s soccer talents continued to grow with countless hours of practice. The fact is, he had no idea how incredible he was becoming. His high school and club coaches constantly told him he had a future in the sport, but soccer was not at the forefront of his mind.

“My main goal was to graduate high school, go to college, get an education, and do something with that,” he said “Soccer was just a thing on the side to get me out of trouble.”

Soon, it would get him out of trouble and far, far away from home.

In Louisville, Ky., Thabane Sutu, the goalkeepers’ coach of the United 1996 FC club soccer team, consulted with Marc Maguire, the owner of an auto dealership called The Car Store, about a dream of his.

Through a connection, Sutu, who had played for the Lesotho national team, had heard there were some talented kids in Lesotho on the U17 national team who would love a chance to train and play on American soil. But they needed a place to stay. Maguire turned to his children to get their approval.

“We said, ‘If they come here and stay, we don’t know if you are going to like them or get along with them,” Maguire recalled. “‘We can’t send them back if you don’t get along with them.’ But we had to make sure they (the kids) were 100 percent on board before we did this. If our kids didn’t want to do this, we wouldn’t have done it. But they were 100 percent for it. At that point, there was no turning back.”

The original plan was to have Seetane and teammate Sunny Jane stay for just a month before returning to Lesotho. It was supposed to be “an experiment,” as Seetane put it.

It didn’t take long though for that experiment to evolve into a permanent change of address. Seetane and Jane traveled to the U.S., handled the players in their age group with ease and held their own against the older boys, too.

Then came another life-changing crossroads for Seetane: Stay in America and work on earning a scholarship to a university or go back to Lesotho. He immediately called his mother and talked to her about his options. He was shocked at what she had to say.

“She said, ‘This is your opportunity,’” Seetane said. “’You decide what you want to do with it. I support everything you are going to do. Go pursue your education. If that’s what you want, that’s the best chance you got. Soccer will always come.'”

After hearing that, the decision seemed easier for Seetane.

“How many chances are you going to get to go live in the United States, study there, and play soccer there?” Seetane said. “There are not many people in my country that can say that.”

For their part, Maguire and his family were elated to show their new guests the American culture.

“It was really cool,” Maguire said. “There were so many things that we took for granted. The first time we took them to the movies they were in complete awe of it. It was almost like having a mature two-year old. I don’t mean it in a demeaning way to them but there was so much stuff they didn’t know existed.”

Off the field, the two fresh faces at Trinity High School were turning heads and taking over the neighborhood.

“They were kind of like rock stars in the soccer and high school community,” Maguire said. “They were the best soccer players around.”

As time went by, there were moments when Seetane no longer seemed like a visitor. He was now part of the family.

“There was one day where Lepe and my younger son Marc were playing in the basement with a tennis ball,” Maguire said. “It hit Lepe in the eye and it hit him pretty hard. He came upstairs and he was actually crying. That’s when I realized it actually bothered me. It made me feel like something happened to one of my kids.”

But as Seetane grew closer to his new family, he began to feel the separation from his relatives back in Lesotho. One winter morning in 2009, he was confused after being called to the principal’s office.

“I didn’t think I’d done anything wrong,” Seetane said. “What could this be?”

When he saw Maguire there, he knew there was bad news: Seetane’s father, Khausi Constantine Seetane, had gotten tuberculosis and died.

“He’s a pretty tough kid,” Maguire said. “He didn’t cry. He was kind of in shock. We went home and made travel arrangements and were on the way to Lesotho the next day.”

Seetane said he was incredibly happy to return home, although the circumstances were unhappy and very few things in his country felt familiar.

“A lot had changed,” Seetane recalled. “The roof had changed. Basically everything was different. I couldn’t even point out my house. I knew the area but I was shocked that it was my house.”

An added change to the home was a gift Maguire brought, something that Seetane’s mother would cherish forever.

“I had a big picture of him (Lepe) playing soccer on his high school team that I took over there for her,” Maguire said. “When she got it, she was hugging the picture and crying. To send away your fourteen-year-old son is a very difficult thing to do. But she knew she was giving him a better life. It was a pretty unselfish act on her part to do that.”

Seetane spent only two weeks back home. When it was time to go, the decision to leave was not as tough as previous years. The fourteen-year-old teenager who boarded a flight out of Lesotho only a few years previous was not the same 16-year-old who got off the plane in 2009, and Seetane felt the importance of continuing his education after his father’s death.

“These things happen,” Seetane said. “Even when I’m home, I can’t stop these things from happening. I told my mom, ‘If you need me to stay longer, I can, but I would much rather catch up with my schoolwork.’”

After Seetane’s return, letters from schools started flowing in for him and Jane, the two budding stars. They were offered close to 50 full rides, and Maguire and the boys found themselves traveling to all corners of the country. Suddenly Seetane, who admitted he once “had no idea there was such a thing as college soccer,” was fielding offers from some of the most competitive U.S. schools.

Maguire had a hard time with the logistics of a visit to Northwestern, but a “bizarre windstorm” that knocked out the electricity and canceled school in Louisville for two days triggered a spontaneous trip to Evanston.

Coach Tim Lenahan remembers the visit with Seetane and Jane, who he knew were some of the top players in the country for their class. He was aware of the interest these two players were receiving from coast to coast, and had difficulty gauging Seetane’s impression of NU during their first interactions.

“We just wanted to show them who we were,” Lenahan said. “But we weren’t sure whether he was having a good visit or not. He really kept to himself.”

The top recruit wanted three things in his future school: education, soccer and proximity to Chicago.

All signs favored the Wildcats, but Maguire’s financial situation presented the final hurdle between Seetane and NU. Maguire could not pay for both Seetane and Jane to go to college for four years, especially at an expensive institution like NU. But Lenahan was able to give Seetane the offer for which he was looking.

“We were able to mix and match scholarship money with need-based financial aid,” Lenahan said. “We knew it was going to take a substantial package to get him here.”

With a full ride and a filled checklist, Seetane finally achieved his goal. He was going to be a Wildcat.

Back in Louisville, life is more or less the same. Maguire, who has welcomed two more soccer players from Lesotho, could not imagine life without Seetane and Jane.

“They’re just as big a part of my life as my natural kids,” Maguire said. “To me they are as much my sons as my other boys are. Along with the birth of my children, them coming over here is the most important thing that has happened in my life.”

Life hasn’t changed much for Seetane either. In Lenahan’s eyes, he’s the rock star of the squad.

The 62-inch midfielder — 63 on a good day, he says — is Lesotho-sized as he stands under the glare of far grander American fields, making his presence known. The memories of Lesotho cling to his back like his jersey number, strengthening his stride in the land of opportunity.

“Anytime they announce his name, you can hear the crowd go crazy,” Lenahan said. “He’s clearly the most popular player on the team. Anytime we have kid groups come in, they go crazy for him. I guess it’s cheering for the little guy for a little bit.”