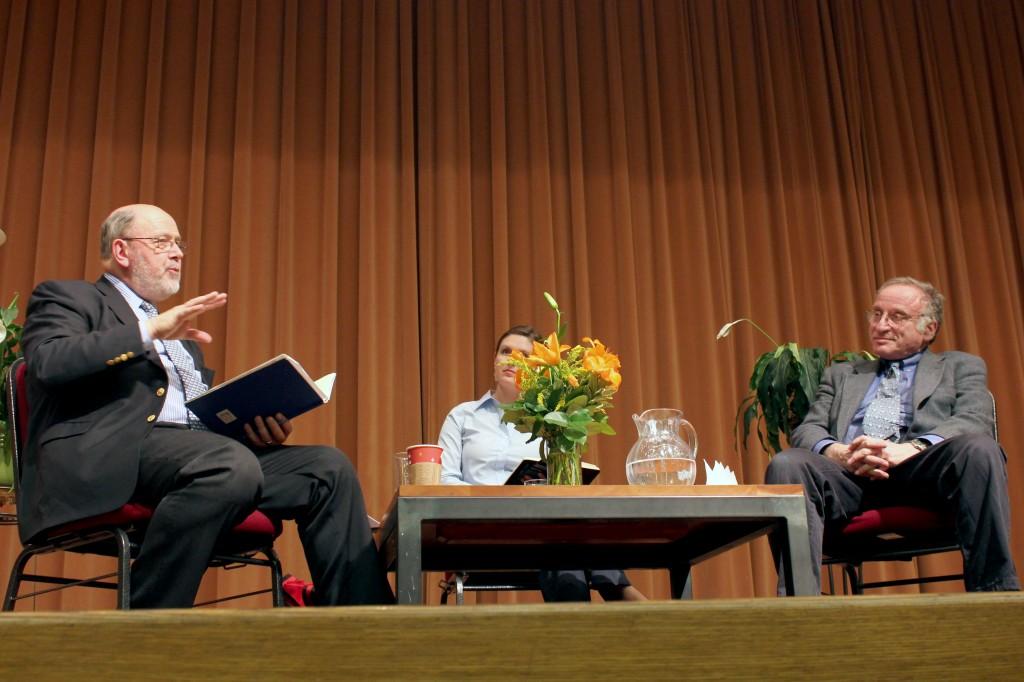 N.T. Wright, a professor on Christianity at Saint Mary's College, and Northwestern Prof. Gary Morson discuss religion's role in the modern society. The Veritas Forum focused on the relationship between Christianity and society.

More than 500 students and faculty members packed into Ryan Auditorium on Monday for a religious secularism forum featuring a famed bible scholar and a popular Slavic literature professor.

The fifth annual Veritas Forum at Northwestern explored the topic “What Gods Do We Believe in Now?: Challenging the Religions of Culture.” Author N.T. Wright gave a keynote presentation, which was followed by a response from Slavic literature Prof. Gary Morson and a question-and-answer session.

“Veritas Forum is about addressing the relevancy of Jesus Christ in scholastic, modern day terms,” said Jens Notstad, the NU Veritas Forum campus director. “It exists to bring a relevant Christian voice to the academic arena.”

The Veritas Forum is an international organization that hosts events at universities around the world to encourage discussion about morality, science and Christianity. Nostad explained this year’s topic expressed “what it means to be a Christian in a secular age.”

Wright opened his speech by thanking the audience for allowing “a Brit like me to come over and tell you about your own culture.” He discussed the American tendency to increasingly promote secularism and move to “banish talk of God from public life.” He also asked whether or not the total separation of religion from all other aspects of life was either wise or possible. He argued religious teachings are not just about factual knowledge but also about “biblical wisdom,” the foundation of which was love.

“The objectivity of neutrality of science has played into the hands of the gods we secretly worship,” Wright said, referring to sex, money and power. “We have 1,000 machines for making war, and none for making peace.”

In Morson’s response, he argued that the problem was not secularism but rather a “fanatical belief in anything.”

“The danger lies in the conviction that all the good people are on one side, and everyone on the other side is evil,” Morson said.

Morson stressed the importance of being able to look at everything from different points of view, saying it was important to be able to hear viewpoints one did not necessarily agree with.

SESP junior Krysta Smith, who heard about the event through her involvement in Campus Crusade for Christ,[http://nucru.com/] said she thought both speakers made good points.

“Getting people with different perspectives coming to events like this is very important,” Smith said. “I’m really firm in my Christian beliefs, but I think I oftentimes lack the intellectual part of it.”

McCormick freshman Justice Reed said he came to the forum because he had heard of Wright’s importance in the Christian community. Reed said he found Wright’s points about pseudo-gods, or gods “we secretly believe in,” to be the most compelling part of the forum.

“I came to hear about Christianity through a logical lens, which is something I don’t usually get as a Christian,” Reed said.

Weinberg senior William Weber said he thought the forum “helped to bridge the dichotomy between science and religion.” Weber found out about the Veritas event through his involvement with Greek InterVarsity.

“You usually don’t see them discussed together,” Weber said. “Usually it’s polarized from one point of view.”

“I think it is really relevant and really applies to students living within Western society,” Notstad said.