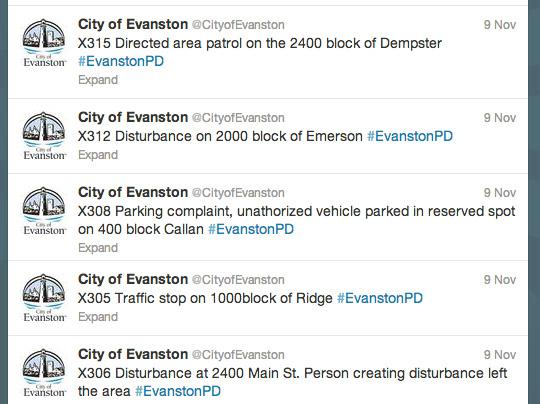 The Evanston Police Department on Friday held its annual tweet-along of 911 calls. The event was meant to show residents more about day-to-day work done by EPD.

The Evanston Police Department participated in a tweet-along of 911 calls from 3 to 11 p.m. Friday in order to educate the public on the way EPD responds to emergencies.

This event marked the second tweet-along organized by the city.

The tweets were published by Adelita Hernandez, Evanston’s citizen engagement coordinator, on the city’s Twitter feed. The calls were taken directly from the 911 dispatch center and published from the communication center at the police department.

The calls were screened to avoid publishing those dealing with children, domestic violence or sexual assault.

Tweets published Friday included the nature of the call, pictures and videos of the police force as well as new programs headed by the police department. The tweets were re-posted on the city’s website for citizens without Twitter accounts.

At 8 p.m. the Twitter feed invited followers to ask questions.

“Night is getting busier but it’s time for Q&A, we want to hear if you have any questions for our dispatchers or officers,” EPD promoted on Twitter. The questions submitted afterward mainly dealt with how to get involved with the police department and specific inquiries about the lives officers lead.

The tweet-along, Hernandez said, was also used to disseminate information about different EPD departments, which include a new mentoring program, the accident and reconstruction team and the canine division.

EPD Cmdr. Jay Parrott said Twitter can be very useful for the police department as it can inform followers about incidents in their area and help prevent crimes.

Parrott said the more interaction there is between the police department and citizens, the more successful crime prevention will be. He added that Twitter is also a new way to give Evanston residents a fresh perspective about jobs in law enforcement.

“We can better inform the community about what the police do on a daily basis,” Parrott said.

Hernandez, who also published the tweets in last year’s tweet-along, said because the tweets included the nature of emergency calls and police response, the event gives online followers a new sense of appreciation for the police officers serving their community.

She added that the city is always looking for new ways to interact with its citizens. Twitter has turned out to be the most successful way to do this, she said.

“We just really like to engage our community in every way possible,” Hernandez said. “The more people know about the city the more engaged they are.”

Parrott said the city, along with the police department, chose Twitter as the main social media platform for this outreach event because citizens have responded well to it in the past. He noted that Twitter has always had a good following in Evanston.

Hernandez said the city plans to continue to use Twitter for future events. She added that for a small city, Evanston has a popular Twitter feed and Facebook page, garnering many followers on both platforms.

“We have quite a presence on social media here at the city,” she said.