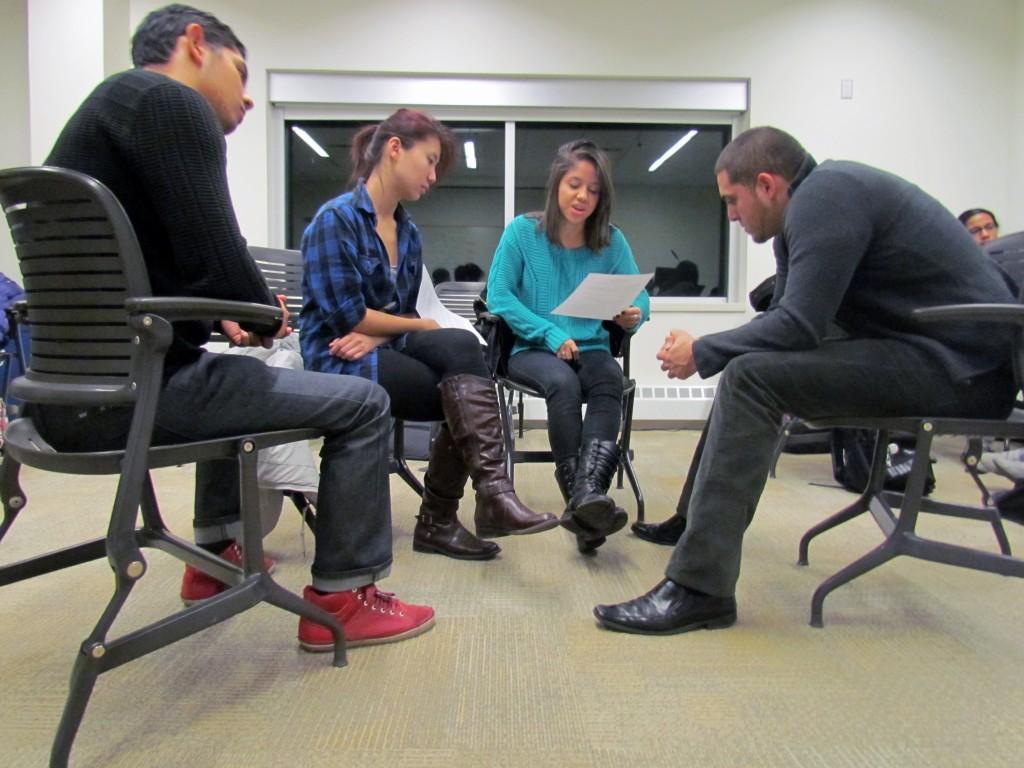 Anthony Iglesias, Lucy Liu, Talia Romo, and Sergio Alvarez talk in their group about a sexual assault scenario. The small group discussions were an effort to get students to verbalize their opinions on the topic.

The Multicultural Greek Council organized a discussion on sexual violence and gender norms Thursday to address increased attention to sexual assault in the national media.

The discussion was part of MGC Week, an annual week of activities organized by the council. The talk was organized with Men Against Rape and Sexual Assault and Sexual Health and Assault Peer Educators.

Thirteen students, both Greek and non-Greek, attended the event, which was held in Searle. Students discussed issues related to and causing sexual violence and gender norms, such as men expressing less emotion than women and females being more passive.

“I hope that instead of feeling scared about sexual violence, people feel empowered to talk about it,” she said.

Previous events on the topic have been organized by different NU groups, including another talk Stuart gave for NU Active Minds on Wednesday. She attributes the increased interest in discussing sexual violence to recent events, including the highly publicized personal account of an Amherst College student claiming she was forced to stay in a psychiatric ward after reporting her rape.

“We wanted to incorporate an educational event,” said Communication junior and MGC president Isabella Pasbakhsh on MGC’s participation in the discussion. “We felt like this topic was relevant to the Greek community.”

Some students said they attended the event to help themselves work through personal experiences.

“I came because it is a personal issue for me,” said Weinberg senior Anthony Iglesias. “I think we need to have these types of conversation as much as people push race and racism.”

Students were then divided into groups of four to share their opinion on the Illinois and NU definitions of sexual assault, as well as a scenario they were provided with. The discussion concluded with Stuart discussing the options provided by NU for individuals affected by sexual violence.

Someone who has experienced a sexual assault is more likely to talk to a peer first before seeking professional help, Stuart said. They will then seek professional help if the friend recommends it or they know someone who is involved in a group like SHAPE or MARS, she added.

“The school makes it easier for a student to bring a complaint of sexual violence because we feel it is our duty,” Stuart said. “We are a confidential place to come talk and nothing is going to happen if you come talk to me and Eva (Ball, coordinator of sexual violence response services and advocacy). We’re not going to bust down doors or call the cops.”

Weinberg junior Beth Colon said she felt that it was especially beneficial that the event was oriented to the Greek community because of the stigma often associated with its cultural groups.

“It’s more reassurance about the processes that are in place at Northwestern,” Colon said. “It’s especially reassuring that they’re doing it with the Greek community directly.”