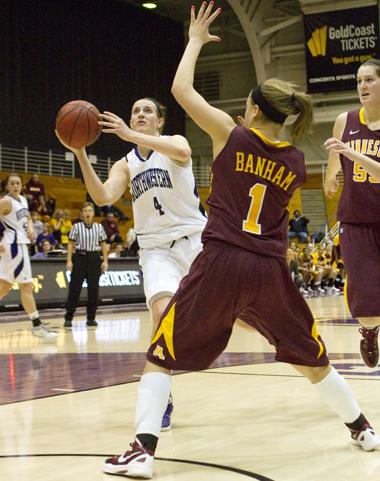 Northwestern forward Kendall Hackney and the Wildcats are looking for a berth in the NCAA Tournament this season. After winning all five of its games in exhibition play, NU opens its regular season Friday.

After a decisive 91-34 victory in its exhibition game against St. Francis (Ill.) on Oct. 28, Northwestern looks to start the season off with another win over Tennessee-Martin Friday night in Evanston.

The Skyhawks are coming off of an impressive season in which they won the Ohio Valley Conference for the third consecutive season, which earned them an automatic NCAA Tournament bid. The Wildcats see their opener as a challenge and are concentrated on shutting down the Skyhawks’ dynamic duo of sophomore guards Heather Butler and Jasmine Newsome.

“If we can stop them I think we will be pretty successful,” senior Kendall Hackney said. “They are really quick and athletic so we just need to maintain our defensive stance and be in great position the whole game.”

This early in the season, however, NU is focused more on its own team than its opposition.

“We’re going to have our hands full, but I think more first game of the season we’re trying to find out more about our own team,” coach Joe McKeown said.

The team has already made strides from last year. Sophomore Karly Roser was pleased with what the team did in its exhibition game and already sees improvement from last season.

“I think we transitioned pretty well and played as a team,” Roser said. “That game was a lot of fun because we won and also, our team dynamic is so much better this year than last year.”

The biggest change for the Cats this year is the addition of five dynamic freshmen to their roster. The team is already seeing what this freshman class brings to the table.

“They’ve been great as far as attitude and energy,” McKeown said. “They’ll get game experience and see what it’s like to take scouting report into game, matchups and things like that. They’ve done a great job so far. They have days when they’re freshmen. We all do, but their attitude and energy has been really impressive.”

“They have a lot of talent and we just need to put it in the right place for them to use it,” Roser said.

Looking at the non-conference schedule as a whole, the Cats are optimistic they can compete at a high level and head into the Big Ten season in a good position to make the NCAA tournament.

“We want to go undefeated in preconference because we want to go to the NCAA tournament this year,” Hackney said. “It’s a really big goal for us. Every game is a really important game for us to win.”

McKeown emphasized the difficulty of NU’s non-conference schedule and how it will prepare the team for the Big Ten.

“Ours is really tough,” he said. “Regardless of what happens in the first 13 games, we just want to get better going into the Big Ten.”