Gameday: Legends of the fall 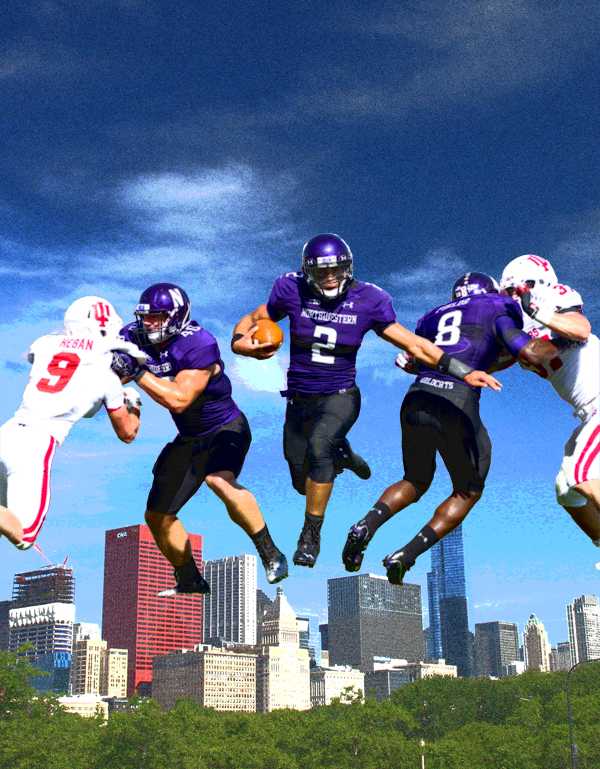 The Wildcats are in a heated competition for the Legends Division crown just two years into the Big Ten’s realignment into two divisions for football.

1995 wasn’t as different from 2012 as one might think. A Democrat held the presidency after some years of a President Bush. A Batman movie was one of the highest-grossing films of the year. At Northwestern, Pat Fitzgerald was a figure even then.

The former All-American linebacker for the Wildcats is now coaching his alma mater, and the Big Ten has made a seismic shift in the 17 years since NU last made it to the Rose Bowl. That shift is the expansion and subsequent restructuring of one of the oldest conferences in college sports.

With almost two seasons fully completed under the new landscape of the Big Ten, coaches, players and universities have grown accustomed to the switch. With the addition of Nebraska last year, the conference split into two divisions: Legends and Leaders.

The Cats seem at home in the Legends Division, and after a five-game losing streak sunk its chances last season, this year NU remains in contention for a division title with three weeks left in the season.

“It’s pretty special for the fans,” Fitzgerald said. “It’s great to see the two divisions. Now we go to November and we have divisional races going down to the wire. Two years into it, I think it’s pretty cool.”

Senior safety Jared Carpenter has seen both sides of the coin since enrolling at NU in 2008.

When Carpenter first arrived on campus, the Big Ten champion was the team with the best conference record at the end of the season. Now, the road to the Rose Bowl goes through the conference championship game in Indianapolis, where the winners of the two divisions square off.

Although Carpenter may be right in saying the Big Ten can truly crown a champion at the end of the season, the path to a championship may be more difficult than in years past.

“(It’s) probably harder than before,” Sports Illustrated’s Stewart Mandel said of the route to the Rose Bowl. “When it was 11 teams, you could luck out in a given year and miss one or two of the best teams in the conference on your schedule. Now, even if you miss them during the regular season, you’re going to have to see the best team from the other division once you get to Indianapolis.”

In the Big Ten, where being the champion and making it to the Rose Bowl is perhaps more important than anything else, teams are focused on making it to Pasadena, Calif. The change in the route to California has been reflected in the Cats’ team goals.

In NU’s team room, adorned with player cutouts on the wall and a motivational sign at nearly every turn, Fitzgerald lists his Cats’ goals on a sign for everyone to see.

Fitzgerald only reveals certain goals at certain times, with black tape covering up what the team’s next milestone should be. The most recent goal was revealed during the middle of the season: win the Legends Division.

Race to the top

The past few years, money dominated the discourse around college football. Television revenues continued to shoot through the roof. Journalists, players and coaches debated whether or not student athletes should be paid. Now, prognosticators wonder how much money is to be made when the Bowl Championship Series turns into a playoff system.

Refreshingly, the Big Ten’s creation of the championship game wasn’t a money grab.

Last year’s conference championship game only generated between $4 million and $5 million in revenue, Big Ten deputy commissioner Brad Traviolia told ESPN.com, and the money earned from the game was split between all 12 Big Ten schools as part of the conference’s revenue sharing system.

Instead, the excitement from Big Ten officials about the new divisions comes from competition — a reason much more pure to sports than money.

“What I like about the divisional play is that you do have a chance during the regular season to play for a championship,” Jim Phillips, the University’s vice president for athletics and recreation, said. “It allows you to enhance some of the rivalries that you have because you (face) those teams every year. It creates some great competition.”

Despite some of the excitement being hampered in the Leaders Division this season, with both Ohio State and Penn State ineligible for the conference championship game, the Legends Division has provided some competition for the stretch run.

Nebraska, Michigan and NU all have a shot at making it to Indianapolis.

The Cornhuskers sit in the driver’s seat because of their 3-0 record within the Legends, but both Nebraska and Michigan have 4-1 conference records. And although the Cats have two conference losses, they’re tied with the Wolverines in respect to their division record, with a chance to make up some ground on Saturday.

“(It’s) absolutely exciting,” Mandel said. “Even somebody like me who grew up in the old days, the Big Ten had to (create a championship game) to maintain relevance in the national scene. I thought last year’s game was tremendous. Even though the teams weren’t playing for the national title, a lot of people watched that game.”

No matter how different the conference may look since the Cats last made it to the Rose Bowl, Fitzgerald said every team in the Big Ten still faces one of the same hurdles as before.

“The bottom line is you have to win,” he said when comparing this season to his days as a player at NU in the mid ’90s. “If you win, you put yourself in a position for a significant November. We’re in that position (now); all we can control right now is what we can do.”

It will take some maneuvering for NU to earn its first Legends Division title and give itself a chance at the Rose Bowl.

Fitzgerald is correct in that the Cats must win, with a third loss all but assuring the Cats have no chance of going to Indianapolis. A win over Michigan on Saturday would put NU into second place. But because the Cats lost to the Cornhuskers, they need Nebraska to lose two of their last three games to win the division, assuming NU wins its last three.

Ultimately, the Cats will be pushed to their limits if they want a chance to make it to the Rose Bowl. They would need to defeat Michigan, Michigan State and Illinois — three teams NU lost to last season — to even put themselves in the conversation.

Then, the Cats would have to take on the champion of the Leaders Division in a winner-take-all game in Indianapolis, the likely opponent being Wisconsin, who won the inaugural Big Ten Championship game last season.

Aside from the physical battles in store, NU will need to have a mental focus that has been questioned in its two losses to Penn State and Nebraska. All of the people in the Cats’ football program know that the school’s ultimate goal is to make the Rose Bowl.

Such people become crazy. Or they become legends.