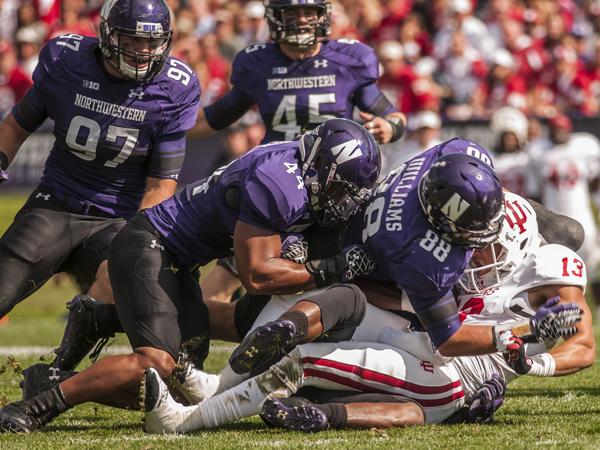 The Northwestern defensive line is tasked with trying to contain the explosive running ability of Michigan quarterback Denard Robinson in Saturday’s contest.

November is a crucial month in the fight for position in the division race, and Saturday’s match between Northwestern and Michigan is just the beginning. The winner will earn the second ranked spot in the Legends Division.

“The bottom line is, you got to win,” coach Pat Fitzgerald said. “If you win, you put yourself in position for a significant November, and you know, we’re in that position. All we can control right now is what we can do and how we go about it.”

Last year, the Wildcats (7-2, 3-2 Big Ten) entered November with a 3-5 record overall and were just trying to start a late season comeback to gain bowl eligibility. However, this year, the Cats find themselves in quite the opposite position, as they were bowl eligible before the Wolverines (6-3, 4-1) managed to accomplish the same feat. Michigan got its sixth win and bowl eligibility last Saturday with a win over Minnesota.

“There’s only a few more (games left),” senior offensive lineman Brian Mulroe  said. “(You need to) just play each play as if it’s the last because you never know when it’s going to be taken from you.”

But the Cats know that a win this weekend will not come without a fight. Last season, NU suffered a heartbreaking loss to the Wolverines at home, blowing a 10-point halftime lead. Michigan outscored the Cats 28-0 in the second half, led by quarterback Denard Robinson, who threw for 337 yards and two touchdowns. Robinson also rushed for 117 yards and another two touchdowns. In addition, backup quarterback Devin Gardner added to the Wolverine’s second half rally with a rushing touchdown of his own.

This season, the Cats will look to better contain the talents of Robinson and Gardner.

Even as a quarterback, Robinson ranks third in the Big Ten for rushing yards, one place behind NU’s own junior running back Venric Mark. However, Robinson did not play  last weekend for the first time in 34 games due to a nerve injury. Nevertheless, Gardner, who ranks first in the Big Ten in pass efficiency, easily filled the quarterback role, throwing two touchdowns and rushing for one in Michigan’s 35-13 victory over Minnesota.

With Robinson’s status for Saturday’s game up in the air, Fitzgerald said that preparing to go against either quarterback — or the Michigan team as a whole for that matter — has been a “headache.”

Regardless of who plays quarterback for Michigan on Saturday, both Robinson and Gardner pose challenges that the Cats have been working to overcome. In the past, NU has struggled against mobile quarterbacks, most notably Minnesota’s MarQueis Gray and Nebraska’s Taylor Martinez. However, the Cats have been making adjustments to this particular style of play by focusing specifically on the quarterback’s run game as freshman running back Stephen Buckley played the role of Robinson in practice the past two weeks.

“(Nebraska and Michigan) are two different teams,” senior defensive end Quentin Williams said. “While they do run some similar schemes, I’d like to think Michigan is a little more rounded in the run game. They showed a few different looks with Gardner in there at quarterback, but they did run some of the same plays that we’ll see with Denard in there.”

But Fitzgerald is worried about more than just Michigan’s quarterbacks and said that the Wolverines as a whole are very impressive.

“They’ve got terrific talent (and are) very well coached (and) very, very disciplined,” Fitzgerald said. “Compile that with having to go play them on the road (and) it’s going to be a huge, huge challenge for us, but you just got to execute and that’s what it comes down to in November.”

However, the Cats are definitely an improved team this year and their run game has proven to be a strong point. In their last game, NU rushed for more than 300 yards, and junior quarterback Kain Colter had three rushing touchdowns. NU rushed for more than 300 yards, which almost tripled Iowa’s rushing yardage. Mark alone finished with 162 yards, which was more than the Hawkeyes had as a team.

After two weeks of preparation, Mulroe said that the team is more than ready for Saturday’s game, the first of many crucial battles in November.

“Everything’s heightened: urgency, awareness and everything,” Mulroe said. “We know where teams are at and where they fall and everything, and we just got to prepare. I mean, each game is huge now. November is awesome and we’ve had a history of doing well in November and we just want to keep that up and stay consistent.”