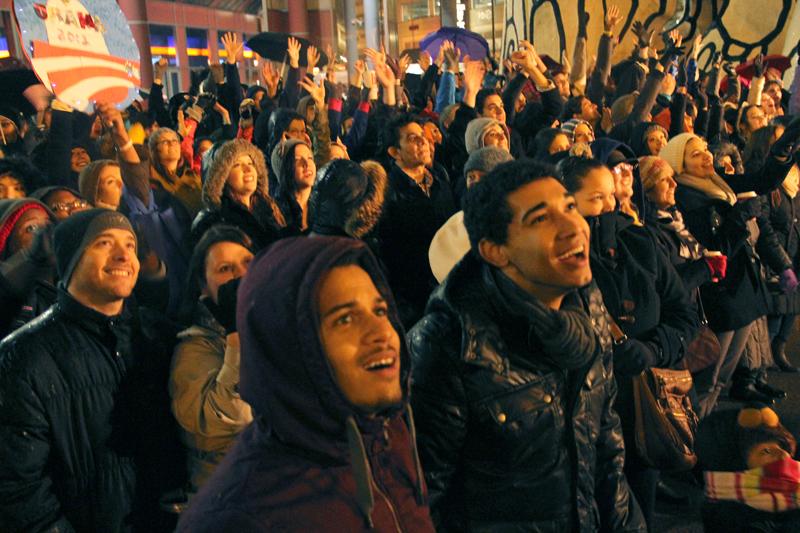 Chicago residents watch election night returns on a big screen CNN put up on the Thompson Center in Chicago. Young people like those at the Election Night watch party were pivotal in re-electing President Barack Obama, according to a new analysis.

Northwestern students may have woken up Wednesday morning to President-elect Mitt Romney if it were not for their peers’ votes, according to exit polls in Tuesday’s presidential contest.

Early estimates pin youth turnout at just under half of the nearly 23 million young adults registered to vote in the United States. Together, those young people contributed one in five votes this election season.

So, how critical was the youth vote?

Enough to push President Barack Obama over the finish line in four battleground states, according to an electoral analysis released Wednesday by the Center for Research and Information on Civic Learning and Engagement. The Tufts University think tank found that Obama could have lost Ohio, Florida, Virginia and Pennsylvania if registered voters aged 18 to 29 stayed home on Election Day.

That batch of swing states made up 80 electoral votes that could have been decisive even if Romney nabbed only half of them.

When asked to explain how crucial young people were in Tuesday’s election, NU political science Prof. Kenneth Janda shared an info graphic showing that 3 in 5 registered voters aged 18 to 24 cast their ballot for Obama.

“One can really say that the youth vote gave Obama the election,” Janda concluded in an email to The Daily.

University of Wisconsin-Madison Prof. Constance Flanagan, an expert in youth attitudes and beliefs, said young voters are as “practical as anybody else” and often do not need glossy promises or a hope-and-change savior to turn out en masse.

“It was a big surprise because it was predicted over and over again that they wouldn’t come out and they had no enthusiasm compared to 2008,”  she said. “They proved basically all the pundits wrong.”

In his victory speech early Wednesday morning at McCormick Place in Chicago, Obama acknowledged his supporters’ youthfulness while addressing cynical claims that the election cycle seemed “small, even silly.”

“But if you ever get the chance to talk to folks who turned out at our rallies and crowded along in a rope line in a high school gym, or saw folks working late in a campaign office in some tiny county far away from home, you’ll discover something else,” Obama told the crowd. “You’ll hear the determination in the voice of a young field organizer who’s working his way through college and wants to make sure every child has that same opportunity.”

Medill senior and Obama campaign intern Ally Byers chalked up the president’s advantage among young people to a grassroots operation that has “some kind of youth focus” at every level. Byers said the campaign emphasized casting young people for the issue-specific videos she helped produce.

“When you have someone the same age as you talking to you about why they support the president, it’s easier to get them to go out and vote,” Byers said.

Tuesday’s exit polls portend an inevitable soul-searching among Republican leaders in the coming months. Shortly after news outlets projected an Obama win, prominent GOPers waxed cautionary about a Republican Party that has skewed further right on certain issues over the years.

“The conservative movement should have particular appeal to people in minority and immigrant communities who are trying to make it, and Republicans need to work harder than ever to communicate our beliefs to them,” Sen. Marco Rubio (R-Fla.) said in a statement.

Janda forecasted a “bitter fight” between the Republican establishment and its more insurgent elements over how to lure more young voters to the party’s coalition.

“The party has gone more toward the extreme, and I think they have to reign it in and be more responsive to what people are actually looking for,” Flanagan said.

In an interview with The Daily’s editorial board last month, NU College Republicans president Dane Stier admitted that the GOP could send a clearer message when it comes to youth interests.

“One of the biggest problems with the Republican Party is really explaining what we believe in,” the Weinberg senior said. “Romney’s done a pretty good job motivating the student base to follow him (on economic issues). But on other issues, it’s kind of a turn off for women and minorities and (doesn’t) really make the case of why being a Republican’s better off.”