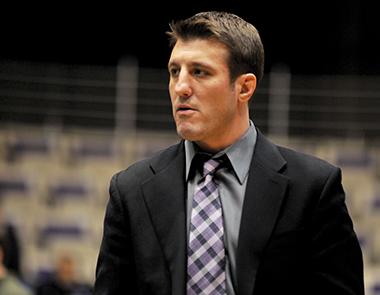 After taking over the head coaching position in 2010, Drew Pariano has guided the Northwestern wrestling program to two successful seasons. He’s sent 11 wrestlers to the NCAA Championships, with five garnering All-American honors.

Located in the underbelly of Anderson Hall, Northwestern’s athletics and communications hub, the wrestling room is a place few working upstairs would venture. The high temperature of the basement – a requirement for the weight-conscious wrestlers – only compounds the stench.

But the smell of the wrestling complex is one built from the blood, sweat, tears and hard work of one the nation’s top-15 wrestling programs. The leader of the program, coach Drew Pariano, has contributed more than his share to the aroma, dating back to his days as a student.

Pariano graduated from NU in 2000 after starting on the wrestling team for four years, qualifying for the NCAA Championships three times. He received Academic All-Big Ten and Academic All-American honors before earning his degree in education and social policy.

The Cleveland native took over as head coach on June 1, 2010, after five years on the coaching staff, replacing the man who coached him as a student, Tim Cysewski.

“(Northwestern) has been extremely important to me,” Pariano said. “I’ve been here a large portion of my life. Northwestern is a place I call home. It’s a place I want to be for a really long time – forever, really.”

Pariano could write his own lifetime contract if the team continues to perform in the same manner as the first two years of his tenure.

In his first season on the job, Pariano guided the team to an 18-2 dual record, including a 6-2 mark in the Big Ten. The Wildcats finished the year ranked No. 14, sending five wrestlers to the NCAA Championships, three of whom earned All-American honors.

Last season, Pariano led NU to a ninth-place finish at the NCAA Championships, the school’s first top-10 placement since 2007. The Cats sent six wrestlers to the NCAAs, and the season also included the team’s best ever finish at the Midlands Championships, a tournament hosted at home in Welsh-Ryan Arena.

Cysewski, who remained as Pariano’s top assistant after ceding the head coaching job, continues to aid the man he first met as a wide-eyed high schooler.

“(Our relationship) is unbelievable,” Pariano said. “He was my coach; I learned so much from him. I feel like now, a lot of the stuff I learned from him, I’m putting into practice.”

Although outsiders may perceive the switch between Pariano and Cysewski as a potentially awkward transition, the move could not have worked more smoothly.

Cysewski still remains a hands-on participant in the program, without dealing with the grind of a head coach’s job. Pariano, who said the two were “firm believers” in keeping things within the wrestling family, could “keep the momentum of the program going” after Cysewski stepped down.

The relationship between the two only grows each year, as they communicate constantly to ensure the team heads in the right direction.

“We see each other all the time,” Cysewski said. “There’s times when we’ll talk to each other every day. My wife will go to bed and I’ll say, ‘See you later,’ because (Pariano and I) are on the phone.”

Pariano, who according to Cysewski takes the job seriously but more importantly “personally,” also makes sure to have fun with his student-athletes. Whether it’s using his dry sense of humor to confuse freshmen or insisting upon watching the entire Rocky series instead of “weird, science-fiction” movies during team trips, Pariano keeps things light when necessary.

The head coach also makes significant connections with his wrestlers on and off the mat. Redshirt senior Jason Welch, now in his fifth year at NU, credits Pariano for helping shape his attitude no matter what he’s doing.

“We have kind of like an uncle-nephew relationship,” Welch said. “He jokes around with me a lot, but at the same time, it’s not all jokes.

“(Coach Pariano) is a no-excuses kind of guy. That’s how he judges himself, he’s really hard on himself. That’s something in a positive way I’ve tried to take in and really take care of the little details in my life.”

Pariano’s senior status as a coach doesn’t stop him from mixing it up on the mat. Welch, a two-time All-American, even hesitated to say he could beat Pariano, admitting it would be a “close” contest.

Pariano and Cysewski’s positions are unique in that they can learn first-hand what they need to work on with their athletes by lacing up and hitting the mat. Cysewski even admits that he and Pariano “have egos also” and expect to win whenever they battle their wrestlers.

But Pariano will ultimately be judged by how the Cats perform when the lights go on at Welsh-Ryan Arena. NU, although well-regarded, faces a grueling gauntlet every year in the ultra-competitive Big Ten, and Pariano wants to cement a legacy at his alma mater.

“I look at the other coaches, (football coach) Pat (Fitzgerald), (lacrosse coach) Kelly Amonte-Hiller, there’s coaches here who have really established themselves here, and I’d like to do that as well,” Pariano said. “I feel good about our team. We have a good future in front of us.”