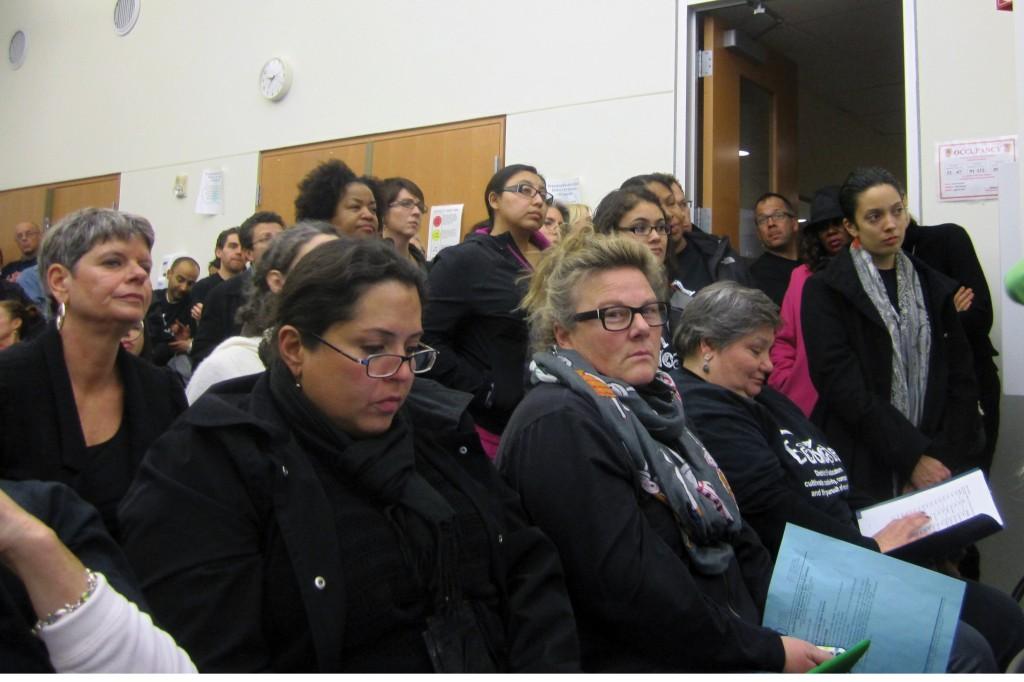 A standing-room-only crowd of more than 180 listen to the school board discussion of Evanston-Skokie District 65's recently revised performance appraisal system Monday night.

Many of the more than 180 people who attended Monday night’s working school board meeting were concerned about how student growth could be measured fairly, supporting efforts to introduce the performance evaluation system as only a pilot program.

Board member Richard Rykhus commented that the revised system is “very complicated,” prompting a couple laughs and shouts of agreement from the audience, which included a sizable presence of District 65 teachers wearing black t-shirts in solidarity.

“That wasn’t supposed to be funny,” Rykhus said.

Similar to the original system, which was implemented during the 2009-2010 academic year, overall ratings will be determined by looking at both teacher and student performance equally. To comply with state requirements, however, District 65 developed a four-rating evaluation system including “excellent, proficient, needs improvement and unsatisfactory,” one more than the previous version.

The calculations used for the student growth rating have also changed significantly.

To receive an “excellent” rating under the previous system, teachers needed to have more students at or above grade level at the end of the year than at the beginning of the year.

Under the newly revised system, however, students are placed into one of four categories: college and career readiness, grade level, below grade level and the lowest quartile. A fifth category was also created to determine overall classroom growth.

A teacher will now receive an “excellent” rating if the percentage of students that meets growth targets in most categories exceeds district figures from the previous year. None of the categories may reflect a drop in performance.

Several board members questioned how the system accounts for differences from school-to-school and classroom-to-classroom, such as discrepancies in administrator assessment, resource distribution and classroom proportion of special education students.

Board member Tracy Quattrocki expressed concerns that although there is a large sample size for assessments such as the Measures of Academic Progress, there is not the same level of “sophisticated crunching of numbers” for the district-developed assessments, which will be used to evaluate teachers in several subject areas such as fine arts and foreign languages.

“We want to make sure that all of the content areas are being treated equitably,” Quattrocki said.

After Rykhus suggested that the current and previous evaluation systems run in parallel with each other, Murphy responded that there were already enough fail-safes in the current system to ensure teachers are treated equitably.

For instance, a “rule of six” eliminates categories in which there are fewer than six students from consideration of a teacher’s growth rating if the category will negatively impact the rating.

“We did not want the teacher’s evaluation to be hinged upon the performance of a very small number of performance,” Murphy said of the safeguard.

Despite the occasionally tense back-and-forth Monday night, several speakers reiterated that those in attendance came to share their opinions because they care about the district’s students.

Still, the loudest applause of the night was reserved for Jean Luft, president of teachers’ union District 65 Educators’ Council, who called for the program to be instituted as a pilot or “shadow system.” A survey of district teachers found that 98 percent do not trust the revised system to give them a fair and accurate rating, Luft said.

“Remember that a child is so much more than a test score and the same applies to a child’s teacher,” Luft said.