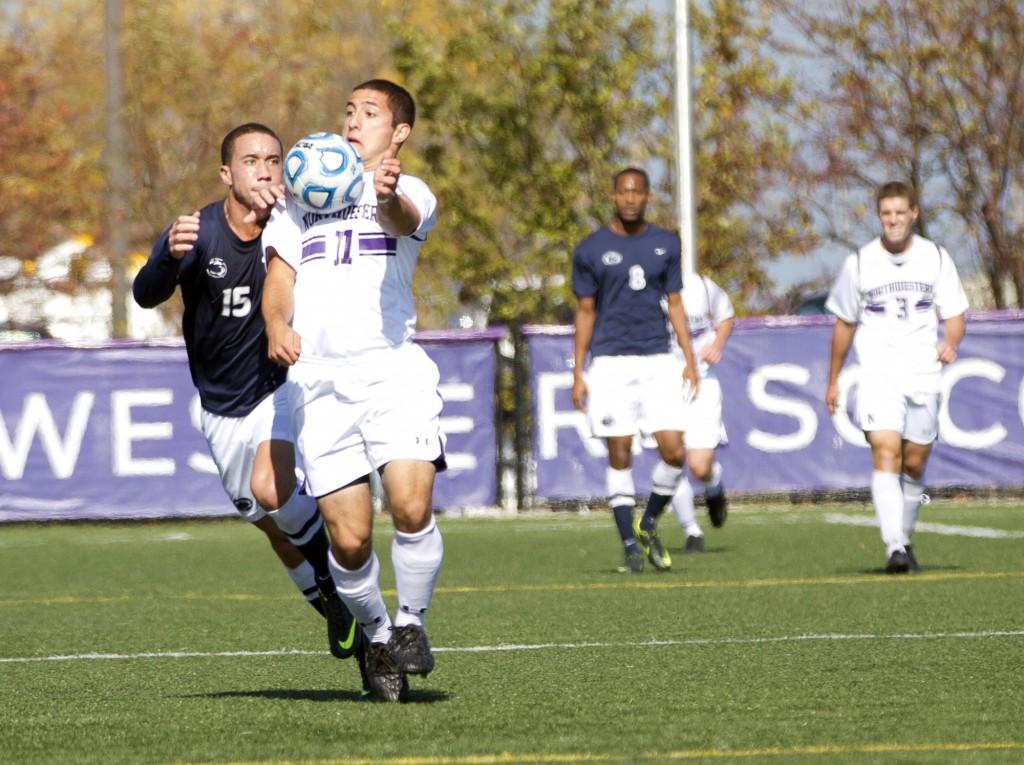 Sophomore midfielder Eric Weberman assists on the lone Northwestern goal against Indiana. With a win against the Hoosiers, the Wildcats would have earned their second straight Big Ten regular season title.

The Wildcats don’t try to send every game to overtime — it only seems that way.

Indiana took a 1-0 lead into halftime, striking first on a 30th minute score from sophomore forward Eriq Zavaleta. Zavaleta’s goal marked his conference-leading 16th of the season, nine more than anyone else in the Big Ten.

The Wildcats did not attempt a shot in the first half, failing to penetrate an Indiana defense that has allowed fewer goals than any other Big Ten team. At halftime, coach Tim Lenahan ­made several adjustments.

“We talked in the locker room about putting the other team under a little more pressure, about trying to step a little higher up the field,” he said. “We tried to pick up the pace a little bit to start the second half.”

The Cats scored right out of the break, a 52nd minute lob into an empty net from freshman Joey Calistri, assisted by Eric Weberman. The goal was Calistri’s seventh of the season, the most of any NU player.

“I was kind of surprised to see the keeper out, but he was aggressive coming off the line and I took a touch around him,” Calistri said. “And I hit the ball with my left foot, and it went over the defender’s head and into the net.”

Despite a bevy of opportunities for both teams, especially the Hoosiers, neither team scored during the game’s final 58 minutes. Indiana almost sent NU home with a loss, attempting two shots in the final minute of the second overtime but could not plant a second goal in the net.

Indiana outshot NU 20-7, but sophomore goalkeeper Tyler Miller saved six Hoosier shots, including five in the second half and overtime to preserve the tie. Lenahan praised the sophomore’s play.

“Tyler was great.” he said. “He’s the best goalie in the Big Ten — the total package. Great training habits, great accountability when he does make mistakes. It’s just great having him behind you. It gives our team a lot of confidence.”

With a victory, NU would have won the Big Ten regular season trophy for the second consecutive year. Instead, the Cats can only share the conference title and need some help to do so. A Michigan State win over Michigan on Saturday would give the Spartans the title outright, while a Wolverines tie or victory would leave Penn State and NU atop the conference. In the latter scenario, the Nittany Lions would win the tiebreaker and earn the top seed in next weekend’s Big Ten Tournament, having defeated the Cats on Oct. 21.

Thursday marked NU’s fourth straight overtime game and fourth straight match without a victory. Since Oct. 21, the Cats have now lost twice and tied twice, after beginning the season 10-2-1. NU is now 2-24-4 all-time against Indiana, including 2-7-3 under Lenahan. Miller spoke of the team’s tendency to play into overtime.

“You get tired from playing that extra 20 minutes in overtime,” he said. “We’re tired, but we’re willing to fight through it. We know there’s something better than being tired when you have a chance to win a championship.”

Calistri said the team was both pleased and disappointed after the draw.

“It’s kind of mixed feelings,” he said. “We’re obviously happy that we still have a chance to share the Big Ten championship. Even though we can’t get the one-seed in the tournament, we know we’ve got a long road ahead of us.”