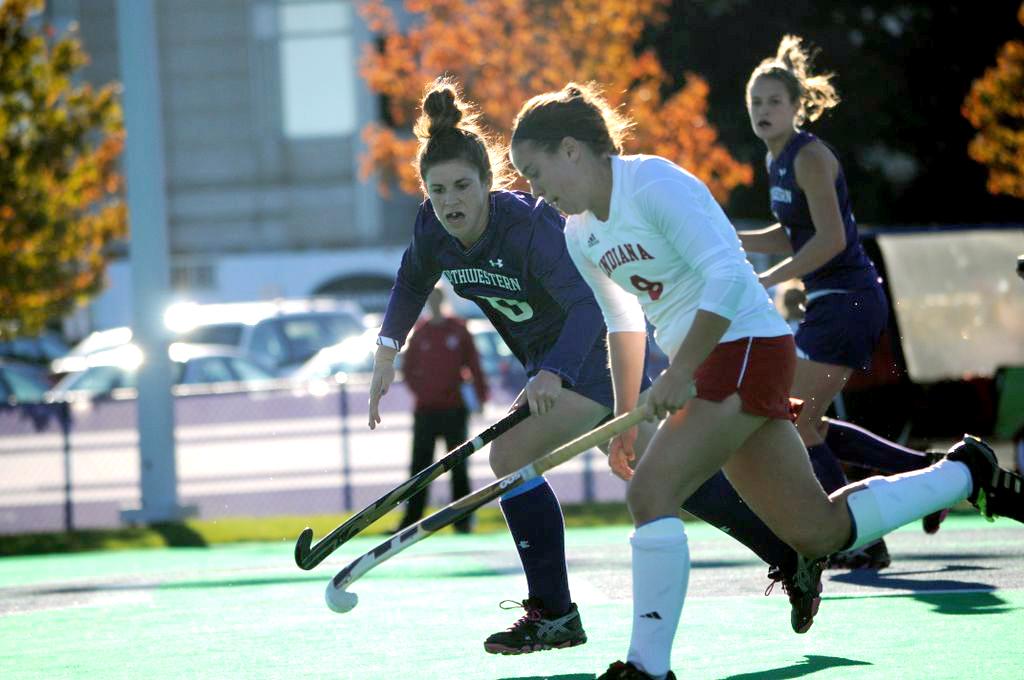 The Wildcats and junior midfielder Nikki Parsley watched their Big Ten season come to an abrupt end after a 4-0 loss to Indiana on Tuesday. NU still hopes to crack the 16-team NCAA Tournament field.

Northwestern know all about shutouts. Seven times this year, the team  has forced opponents to walk off the field at the end of the game with a goose egg on the scoreboard. Unfortunately for the Wildcats, they experienced a taste of their own medicine Thursday.

No. 8 NU (16-4) fell to Indiana (10-8) 4-0 in the quarterfinals of the Big Ten Tournament. It marked the first time this season the Cats were victims of the scoreless misery they felt Thursday afternoon. The team went into the tournament seeded second and looking for a winning end to its Big Ten journey this season.

“All of us are pretty disappointed in the final result,” junior midfielder Tara Puffenberger said. “But we did have opportunities and chances. They just weren’t working in our favor today.”

The Cats dominated possession for much of the game, outshooting Indiana 17-6 and earning nine penalty corners to the Hoosiers’ one, but NU could not get past the reach of Indiana goalkeeper Viki Green.

Indiana first scored at the 18:41 mark and then added to the tally with another goal in the first half. The Cats fought to make up for the two-goal deficit with an aggressive start to the second half. Caroline Troncelliti broke past the Hoosier defense five minutes in, but her shot barreled past the wrong side of the goalpost. The defense was not able to fend off the Indiana attacks and allowed another pair of goals in the second half.

“We were really just unlucky more than anything else,” senior midfielder Chelsea Armstrong said. “We had possession and were really all over them all game. They got luck down at their end, and we just weren’t getting that same kind of luck down at our end.”

The loss eliminates the Cats from the remainder of the tournament, a huge blow to the end of an incredibly optimistic season. The squad finished the regular season with a 16-4 record and high hopes for a Big Ten title.

The season came together under the leadership of Armstrong, who holds the record for most goals in one season at NU. However, she did not contribute her typical results against the Hoosiers on Thursday, taking 12 shots with no success. The end of the Cats’ participation in the tournament means the end of Big Ten play for Armstrong, who was named to the All-Big Ten team Thursday for the fourth consecutive year. The loss could also mean the end of the senior’s illustrious NU career.

“The hardest thing right now is not knowing if it’s the last game I’ve played,” she said. “It’s tough right now. I don’t really know how I feel.”

The next step for the Cats is to be determined by the NCAA Selection Committee. The field of 16 teams will be announced Tuesday. Coach Tracey Fuchs said she is hopeful NU will be in the draw but recognizes the reality of the situation.

“Obviously, this loss really hurts our chances,” she said. “Barring no upsets, we have a shot to get in, but a lot has to happen this weekend.”

For now, all the Cats can do is sit back and watch.

“It’s tough right now because there’s still a chance we can go, but we really have no idea,” Armstrong said. “It depends a little bit on how other teams play. It’s hard knowing it’s out of our control.”