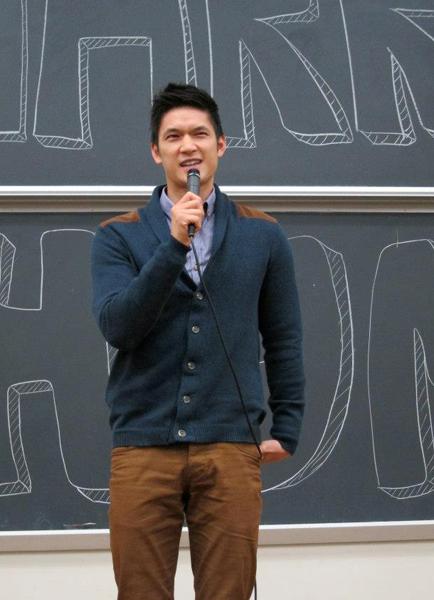 Before he was Mike Chang on “Glee,” Harry Shum Jr. was just a normal kid dealing with bullying and trying to find his voice. As the Taiwanese American Students Club’s fall speaker Saturday, Shum described his journey to “Glee” and even did some dancing for the audience at the event. Before he took the stage, Shum answered some of The Current’s quirky questions.

The Current: What was your favorite musical number to perform on “Glee?”
Harry Shum Jr.: Probably would have to be Michael Jackson’s “Scream.”

The Current: Who are some of your dance inspirations?
HS: I have a lot. First and foremost would be Gene Kelly. I think he’s been an inspiration all around as an actor, director, choreographer and dancer. After that, there’s Don O’Connor, Fred Astaire, even the modern Usher is … the reason I started dancing.

The Current: What song are you currently obsessed with?
HS: Of Monsters and Men. I don’t even know what the song is called. (Starts singing) ‘Don’t listen to a word I say’ — that one.

The Current: If there was a dance move called the Harry Shum Jr., what would it look like?
HS: Apparently I’ve been called the man with no bones, so it would definitely have to be very, very wormy and very liquidy. I would visualize it as being very liquidy.

The Current: What’s your favorite drink to order at Starbucks?
HS: Vanilla latte, grande, with soy.

The Current: Why did you decide to start dancing?
HS: I just felt the need to move. It sounds weird, but I just felt I needed to do something with my body. Because I wasn’t doing enough; sports wasn’t enough. It was more of an expressive thing that was physical, and I used to play sports and it just wasn’t enough. It didn’t have that emotional attachment that dance did.

The Current: If you weren’t working in the entertainment industry, what do you think you’d be doing?
HS: I am a huge fan of the advertising side of things. When I did a lot of commercials, I just fell in love with the advertising stages — the creativity, coming up with these ideas, telling stories through a product, which is weird, but you’re making something out of nothing out of this product. I love that industry.

The Current: What was your favorite movie when you were growing up?
HS: “Back to the Future (Part) II,”  and also the cartoon “The Transformers: The Movie.”  I watched that every single day for like five years.

The Current: In what ways are you similar or different from your character on “Glee”?
HS: Similarities are obvious, you know, we love to dance. I get excited when I have that opportunity to perform in general. I am not as — I used to be — but I’m not as shy and soft spoken as Mike Chang is, and also I don’t know if it’s by choice that Mike Chang doesn’t get to speak a lot. I think the similarities too are loyalty — he’s a very loyal guy, and I like to share that similarity with him.