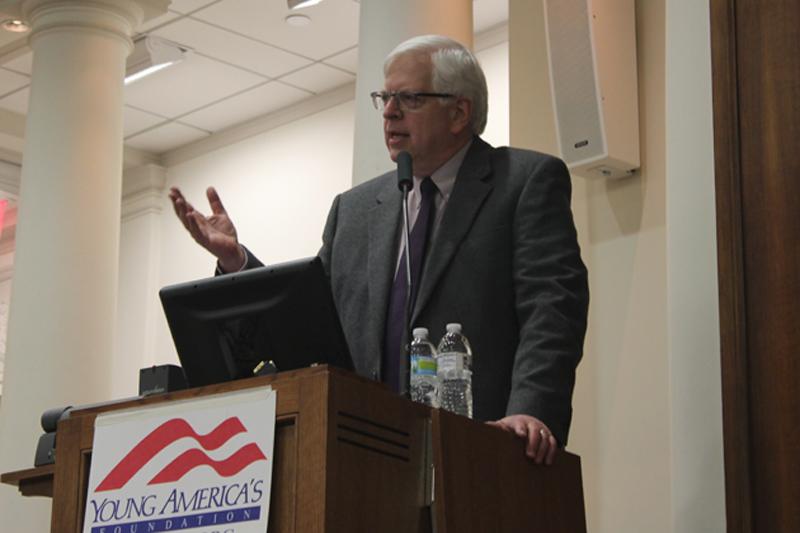 Dennis Prager, host of his own eponymous radio talk show, speaks about his religious and political views at an event hosted by the College Republicans. The author and lecturer is an advocate for both Judeo-Christian and conservative values.

The Northwestern College Republicans hosted a speech Monday by conservative radio show host and columnist Dennis Prager, who spoke on what he considers fundamental American values.

He spoke about the topic, “Why the World Needs American Values to Triumph,” and explained his views on the Judeo-Christian model of morality and how he believes it produces good people in America.

The seats of Harris Hall’s Accenture Forum were filled by students and Evanston residents who came to hear Prager speak. The majority of the crowd consisted of older residents from the neighboring area, with about 75 students in the mix, said College Republicans president Dane Stier, a Weinberg junior.

Prager opened the speech by thanking those who are “predisposed to disagree with me” for attending. He emphasized diverse viewpoints, joking to a laughing crowd that he subscribes to what he considers a liberal New York Times, despite how it “makes me lose my appetite,” and criticized liberals for ignoring the conservative perspectives they disagree with.

“I always win debates with the left,” Prager explained, “because I know all of their arguments and they know none of mine.”

Prager addressed his idea of the “American Trinity,” which he believes is key to America’s societal goodness. The three principles in question are liberty, which Prager considers being “free from the state,” and “In God We Trust” and “E Pluribus Unum,”  two phrases found on American currency.

The latter two drew the most attention from the crowd. Prager challenged labels of American founders Thomas Jefferson and Benjamin Franklin as deists, claiming the belief in a god set the stage for the nation to have a moral backbone, and “contrary to what you’re taught … we were founded to be a God-centric society.”

“(The founders) understood you’ll have a free society if you’re answerable to God,” Prager said, adding that nowadays the state has replaced the presence of God in a less free society.

He went on to explain “E Pluribus Unum,” praising America for being the “least racist, least xenophobic society in human history.” He criticized liberals for emphasizing the “non-issue” of race and said because Americans do not care about differing backgrounds, they do not discriminate.

Prager took questions from the students in the crowd, receiving many critiques of his theories and encouraging debate with those who disagreed. He verbally sparred with students over dogmatism, the existence of racism in America and the validity of deriving morality from Judeo-Christian beliefs. He also criticized liberals for ad hominem attacks in response to a student’s confession that she felt ostracized for expressing her conservative viewpoints, drawing laughter and applause from the audience when he noted that this “makes it easier to choose friends.”

The audience’s reaction to Prager was largely mixed.

Weinberg junior Michael Lamble said the speaker seemed like a “genial … kind fellow” with admirable theories, but they disagreed from practical standpoints. He cited Prager’s view that subconscious racism is not a problem in modern America as an example.

“I found many of his positions attractive,” he said. “I just think that practically, upon evaluating what I estimate to be the real state of things, I cannot hold them.”

Highland Park resident Michael Poll praised Prager for acknowledging other viewpoints while remaining tied to his own.

“He’s willing to say, ‘Let’s be clear with our facts and information, and we don’t always have to agree,’” Poll said. “That’s why he resonates with thousands of people.”

Prager, who lives in the Los Angeles area, hosts the weekday radio show “The Dennis Prager Show.” He is also the author of “Still the Best Hope,” which discusses Prager’s views of the inherent goodness of American values.