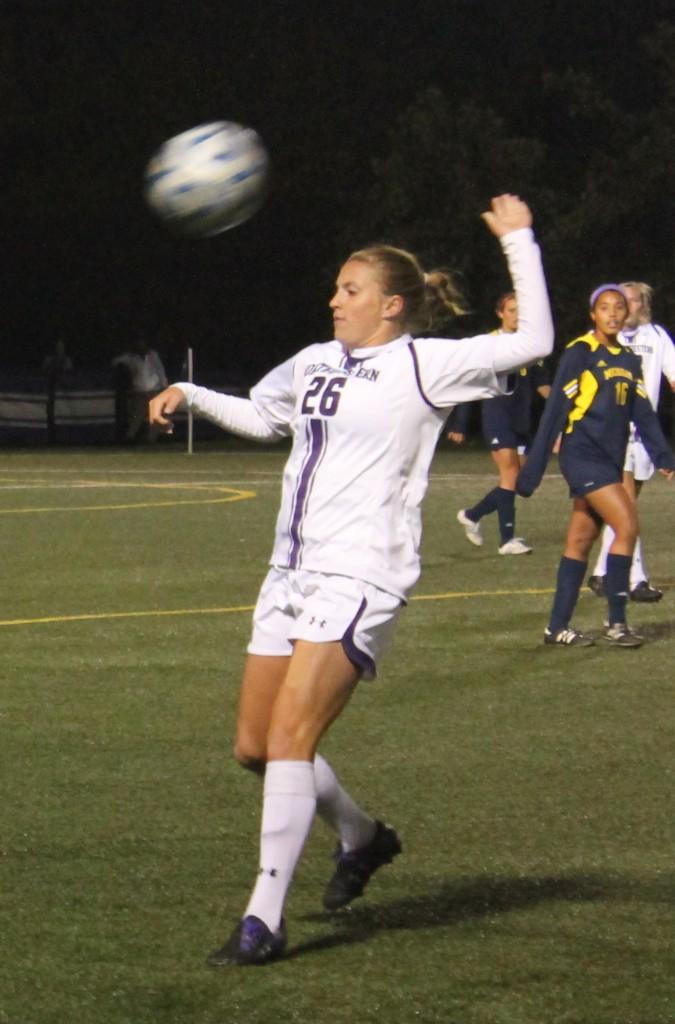 Northwestern defender Bri Westlund and the Wildcats are gunning for their third Big Ten win in a row this weekend. NU won only two games all of last season.

A win against Michigan State on Saturday would top off the Wildcats’ late season comeback with a record three-game win streak, a first since 2009. But it would also get coach Michael Moynihan into the record books for something else: his 200th collegiate win.

“I think that we’ll all be pretty pumped if we get the last one for him right before the season ends,” sophomore midfielder Niki Sebo said.

Moynihan entered his first season at Northwestern this year after coaching women’s soccer at University of Wisconsin-Milwaukee for 19 years. He started back in 1993 as an assistant coach of the Panthers under his sister but would eventually take over the program four years later. Even before this, however, Moynihan’s mother, Laura, coached the Wisconsin-Milwaukee soccer team and left such a mark on the program that the home field was named in her honor. Following in the footsteps of both his mother and his sister, Moynihan served as the head coach for 15 years, leading the Panthers to nine NCAA Tournament appearances, 13 Horizon League Championships, and eight Horizon League Tournament titles.

Even though Moynihan will not make his first appearance in the Big Ten tournament this year, he said the team is making good progress and is working on just getting the job done, most noticeably in the last two games.

“I think we’ve been a little bit tougher,” Moynihan said. “We’ve had a lot of games that have been really, really close and could’ve gone either way and we’ve come out on the wrong end. I think we only have ourselves to blame for that. Nothing was done to us. (But) I think we (kept) working hard (and) we took responsibility for that. The defense has gotten more and more on the same page and stingier. I think we’ve become a little bit better in our decision making in the final third and it’s translated into a couple of goals in the last couple of games.”

And the Cats have done just that. NU took a total of 25 shots in last two games, which is more than they took over the three games before their win streak. They have scored 3 goals in their last two games  and shut out a Big Ten opponent for the first time since last season.

For Moynihan, the Cats’ late success is only a good sign for the future and momentum for their last game of the season.

“(The) last game is no different from the first at the beginning of the year,” Moynihan said. “We want to get better every day and so we want to end on a good note and show continued progress. We always play to win and we haven’t had two wins as a program in a long time in the Big Ten. We want to keep the momentum and keep building in to next year. It’s never too early to start doing that.”

Last season, NU was shut out 2-0 by the Spartans, but because of the Cats’ recent success and improved play, the team will not shy away from the challenge.

“We have nothing to lose,” senior defender Bri Westlund said. “We’re just going to go in and keep battling and we’re going for the win.”