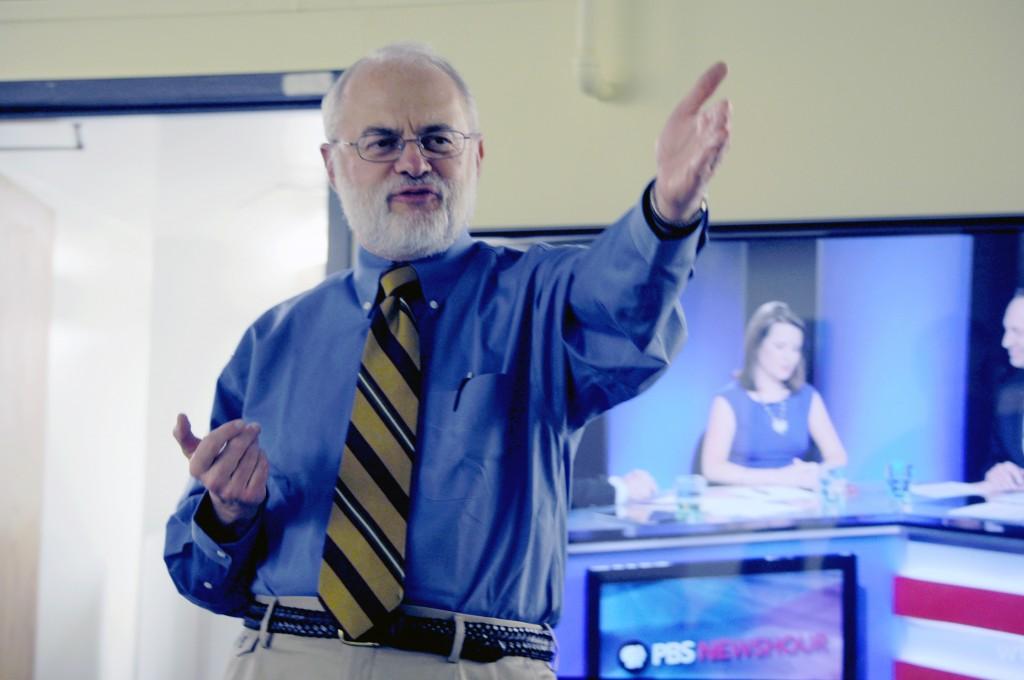 Former School of Communication Dean David Zarefsky speaks to students about the third and final presidential debate. Only a handful of students remained to discuss the candidates’ take on foreign policy.

As President Barack Obama and former Massachusetts Gov. Mitt Romney squared off for the last time in Monday night’s the foreign policy debate, students in the Communications Residential College gathered once again for their last watch party of the 2012 election season.

A discussion with David Zarefsky, former dean of the School of Communication, followed the debate, which was attended by about 30 students. Zarefsky also led a discussion with the CRC students following the first presidential debate Oct. 3 and is teaching the tutorial “Tracking the Presidential Election: Politics, Rhetoric and Media” at the residential college this quarter.

Students let out supportive yells early in the debate when Obama turned to Romney and said, “I know you haven’t been in a position to actually execute foreign policy.” When Romney attempted to use a decrease in the air force and naval ships as evidence of a weakened military, laughter filled the lounge as Obama informed Romney that new technology existed in the military beyond “horses and bayonets” and compared his claims about the Navy to a “game of Battleship.”

About 10 students stayed after the debate for the discussion, in which Zarefsky and the attendees talked about why the candidates repeatedly tried to change the conversation from foreign policy to domestic issues. The general consensus among students was that although polls about the debate would be close, Obama would gain a slight lead.

Zarefsky said he thought the discussion was “well informed” and agreed with many, but not all, of the points raised by students.

“I thought the discussion lacked a historical knowledge,” he said.

Zarefsky added that many students made assumptions that the climate of these debates were the same as past elections. He said these assumptions were natural because for many undergraduates, this is the first election where they are old enough to vote and pay close attention to the debates.

One young voter, Weinberg sophomore Christian Keeve, said he was not sure who would come out ahead following the debate.

“The candidates weren’t that far apart,” Keeve said. “I feel like both stayed in the middle.”

A reporter gauging student reactions for an ABC 7 News broadcast attempted to find a Romney supporter in the audience to interview early in the debate. The students present all shook their heads and even went so far as to laugh when she and CRC faculty master Roger Boye asked them individually if they had anything positive to say about Romney. Boye said after the event that he was not sure if the reporter did find a Romney supporter when he was with her, and some students who may support Romney may have not volunteered because they wanted to pay attention during the debate.

“There also may have been some peer pressure,” said Boye, explaining that if some students did support Romney, they may have been hesitant to voice their support for the Republican candidate when the majority of students favored the president.

The CRC watch party was one of many on campus Monday night, with hosts ranging from political groups like College Democrats to the Sheil Catholic Center. Boye said the series of debate watch parties was important to keep students voting for the first time “abreast of the issues.”