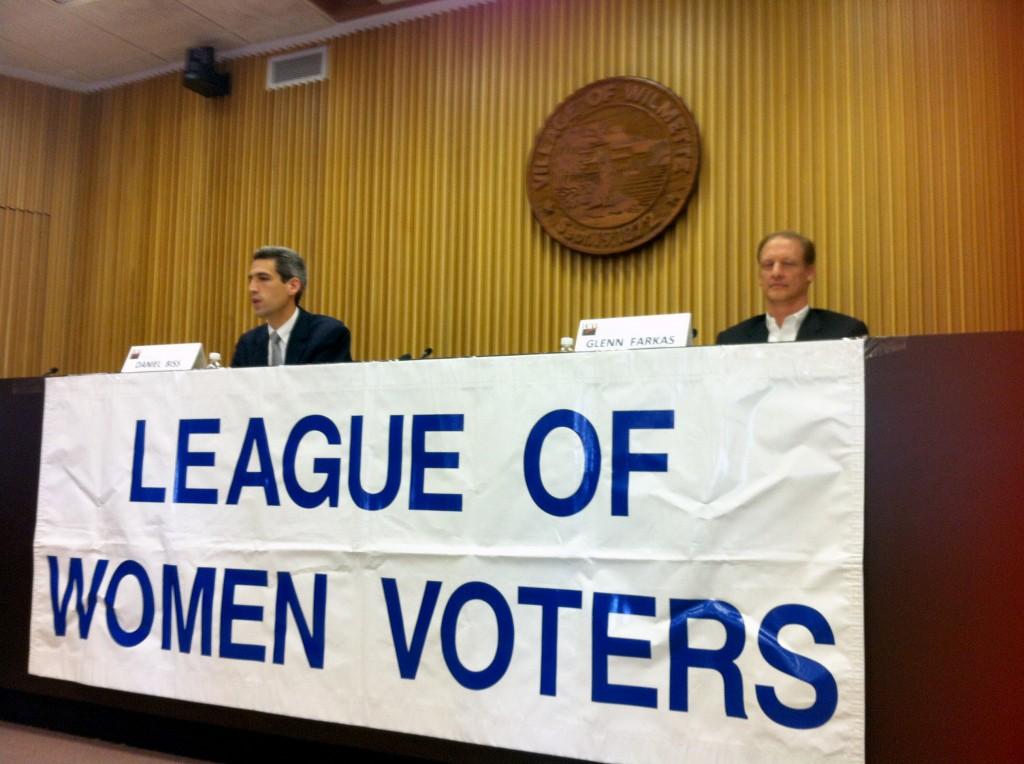 The League of Women Voters chapters of several North Shore suburbs co-hosted the event, which featured candidates from the 9th, 17th and 18th districts. About 50 people attended the debate between the 9th District candidates, Biss and Farkas, moderated by Josie Hamilton from the LWV.

Teresa Grosch, president of the LWV of Glencoe, said the league hoped the debate would help inform voters, particularly college students, about election issues like fiscal reforms because, “they are going to be paying for it.”

“The purpose is to inform people what the candidates’ views are so that they can be smarter voters,” Grosch said. “It’s important for college students to care because you’ve got to have job creation. You’ve got to have pension reform so that you guys aren’t stuck with … bankruptcy.”

The debate began with opening statements from the Biss and Farkas, followed by questions submitted by the audience. Each candidate had 90 seconds to answer each question.

Both candidates vowed to spearhead pension and Medicaid reforms in Illinois in order to solve the state’s budget deficit. Farkas said the state should implement 401(k) plans for new employees and cut current benefits. Biss opposed implementing only 401(k) plans, arguing that states such as West Virginia and Rhode Island have rolled back from implementing such measures. Instead, he proposed a cash balance plan, which he said would “shelter the state from risks.”

However, Farkas questioned Biss’ ability to push for pension reforms because he has the endorsement of the Illinois Federation of Teachers.

“Is it going to be possible for Dan to go into the backroom negotiating with unions and have arm-length transactions?” Farkas asked in reference to a possible conflict of interest. “There’s no way that he can advocate on my behalf and on your behalf because he’s so close to those transactions.”

Biss responded that he values cooperation with the teachers’ federation but had pushed for reforms unpopular with the unions before, such as a bill that prevented employees in the State Universities Retirement System of Illnois from drawing both pensions and salaries.

“I don’t beat (unions) up,” he said, “but accusing me of being in their pocket is quite remarkable.”

The candidates also differed sharply over the issue of progressive tax, or a system that couples increasing incomes with higher tax rates. Biss said Illinois should adopt a graduating income tax code, arguing that it is a sensible policy that should transcend ideological divides.

Farkas called progressive tax a “jealousy tax,” arguing instead that low-income residents should not pay taxes, but “flat is fair” for the rest.

He also opposed introducing any new taxes without cutting spending.

“The politicians in this state have done a very bad job of managing the money,” Farkas said. “I wouldn’t support any of these taxes right now — even some that may make sense — only because we haven’t fixed the core problem.”

“If we’re not prepared to think carefully about these issues that result in the death of an innocent 14 year old … I don’t know what kind of society we have become,” Biss said.

But Farkas said he would be in favor of laws giving the state flexibility in requiring citizens to both pass a gun test and prove their basic need for gun carriage. He argued social issues are not as urgent as fiscal reform.

After the debate, Evanston resident John Foley, who owns a consulting business, said he favors Farkas because of his background in the private sector.

“I am concerned about the level of unfunded pensions in Illinois,” Foley said. “I think Farkas’ policies would attract more businesses in Illinois.”

But Wilmette resident Erich Gibbs said he was disappointed by the candidates’ lack of specificity in the debate.

“They never really get into serious details,” Gibbs said.