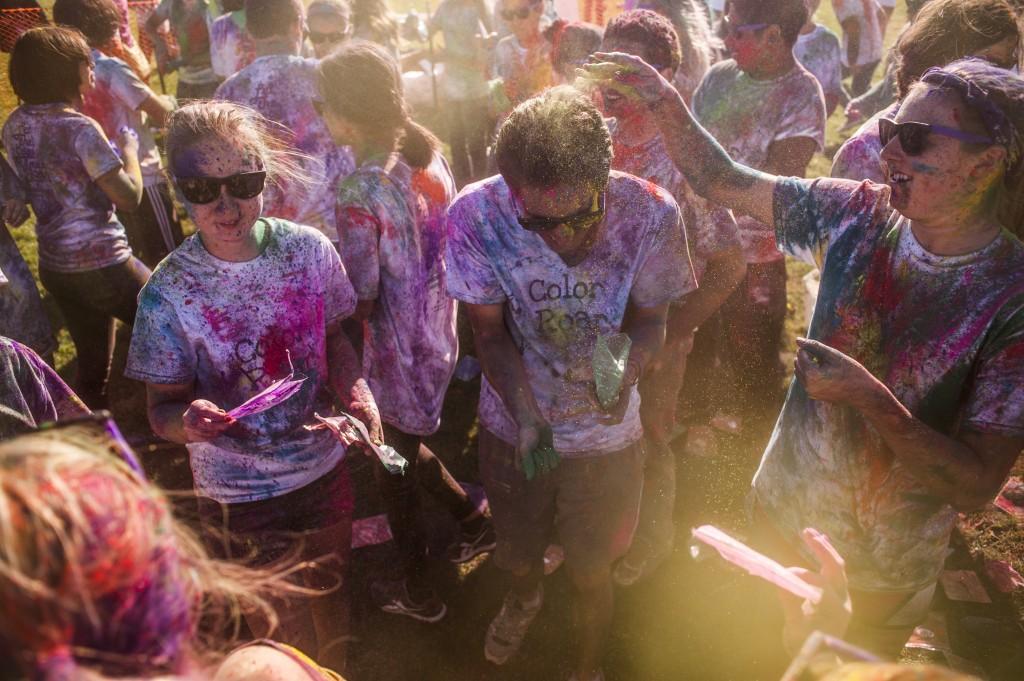 Colored dust fills the air at the start of the Homecoming's Color ROAR celebration. Participants pelted each other with brightly colored powder at the Lakeside Field event.

Primal drums rumbled as the rhythm and dance group Boomshaka counted down for the fight to start on Lakefront Field. The 2012 Homecoming Court led the NU Fight Song before the activities began.

Homecoming hosted The Color ROAR to kick off this year’s Homecoming Week. Students who registered were given powdered paint packets to throw at one another during the fight.

Lakin Davis, community service chair of Homecoming executive board, said the idea for the The Color ROAR came from events like the Color Run, a nationally coordinated charity event where colored paint is thrown at runners completing a 5k race.

“We wanted to kick off Homecoming Week with a big celebration,” the Weinberg sophomore said.  “That’s why we chose this first.”

In past years, Homecoming hosted Make a Difference Day, a day of community service, but Davis said participation numbers for the event were declining. Instead, she said Homecoming decided to host The Color ROAR to raise money for NU’s Red Watch Band program, which focuses on alcohol safety practices.

Davis said the group’s executive board strives to promote safety for all students during Homecoming Week, especially regarding alcohol consumption.

Madison Loew, public relations co-chair for Homecoming, said the fight was “a wild success” and hopes this event returns next fall. The Communication senior said she liked seeing students of all grade levels and all different parts of campus attend the fight.

“It was a good study break,” said Weinberg freshman Julia Harrigan. “There was lots of spirit. I hope they do it again.”

David Tyson, a Weinberg freshman, said he was not expecting powdered paint, and sometimes it got into his mouth as he tried to throw it against the wind.

SESP senior Zoe Goodman said she tagged one of her best friends in the Facebook event, and five minutes later they were registered. She said this ranks high on her list of events she has attended at NU, and almost higher than the Norris Drag Show, one of her personal favorites.