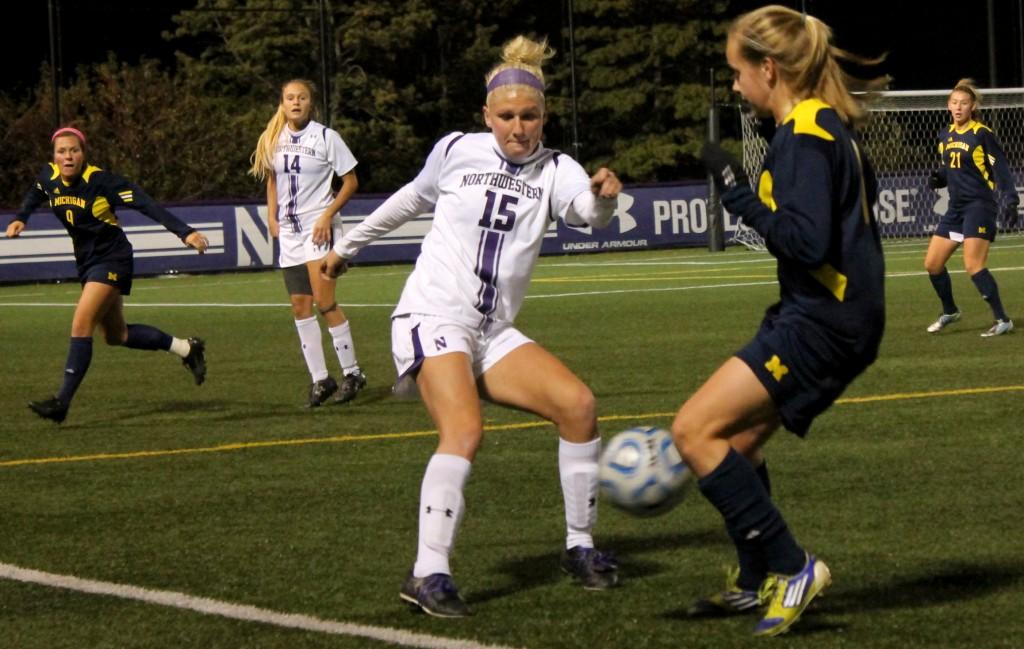 Sophomore midfielder Georgia Waddle scored in the 82nd minute to draw Northwestern even with Illinois. Waddle entered the game just one minute and five seconds before knocking home the critical goal.

Northwestern was following the script: down 1-0 with less than 10 minutes to go, the Wildcats looked well on their way to an eighth consecutive loss ­– until they broke through in dramatic fashion.

The Cats had scored only once in the past 652 minutes of play, yet somehow staged a late rally to give Michael Moynihan his first Big Ten victory as head coach of NU.

“It was fantastic,” Moynihan said. “Especially to get it against an in-state rival on the road. It’s a special moment for (the players).”

“It’s a great feeling,” Allen added. “There are no other words.”

The Cats (5-10-2, 1-8-0 Big Ten) had lost three of their past five matches by a 1-0 margin. Despite hanging tight in games, they allowed late goals that contributed to a poor overall record.

When Illinois (7-7-2, 4-4-1) struck early on a penalty shot from Vanessa DiBernardo in the 17th minute, the feeling must have been all too familiar. Still, Waddle said the team was due for a comeback.

“Being down 1-0, you’re anxious,” she said. “With all the progress we’ve made, we believed we could come back.”

Waddle entered the game one minute and five seconds prior to her goal. On her first touch of the night, she knocked a shot past Illinois goalkeeper Steph Panozzo. Panozzo was out of position after leaving the net in an attempt to play the ball.

When Waddle evened the score, the game appeared destined for extra play. With time winding down, NU made a late push and earned a throw-in with about 20 seconds left.

Waddle tossed a high-arcing ball into the box, and as it bounced around, Illinois was whistled for a handball. Allen stepped to the line with a chance to ice the game. Although she entered tied for ninth in NU scoring history, Allen had not scored since Sept. 21 against Penn State.

“My heart was pounding,” she said. “It was one of the most nerve-wracking penalty kicks I’ve ever taken.”

Like a true scorer, Allen blasted a shot past Panozzo, and the celebration began.

The Cats entered the game under difficult circumstances, knowing they will not qualify for the postseason this year. Moynihan said they were battling for something more profound.

“We came into this knowing we weren’t making the conference tournament,” he said. “We decided we were going to play for pride and to show some character.”

After spending 19 seasons as head coach at Wisconsin-Milwaukee, Moynihan arrived in Evanston hoping to rebuild a program that won just two games in 2011. The progress has not been reflected on the scoreboard in conference play, until now.

“It was one of those feelings where we had a monkey on our backs,” Moynihan said. “We didn’t have our first conference win. To finally get it is a huge relief.”

The late outburst was especially impressive considering Illinois held a one-goal advantage. The Fighting Illini launched 31 shots and tightened their back line. Until Waddle tied the game, the Cats had very few scoring chances.

Despite several close losses, NU has stuck to its game plan of stout defense. Sophomore goalkeeper Anna Cassell made 6 saves for NU, which helped the team stay in contention. Moynihan said the entire team stayed focused and motivated while facing the deficit.

The significance of this win will extend past Wednesday. To Allen and Waddle, this marked a sign of a program finally headed in the right direction.

Moynihan said he hopes this win lays the foundation for more success.

“(The players) feel like we’re moving forward,” he said. “They’ve been working really hard. My message to them was: We need to own that … When the time is right, you’ll get the win. Now, I hope they get addicted to it.”