Football: Wildcats focus on fundamentals to get by Cornhuskers 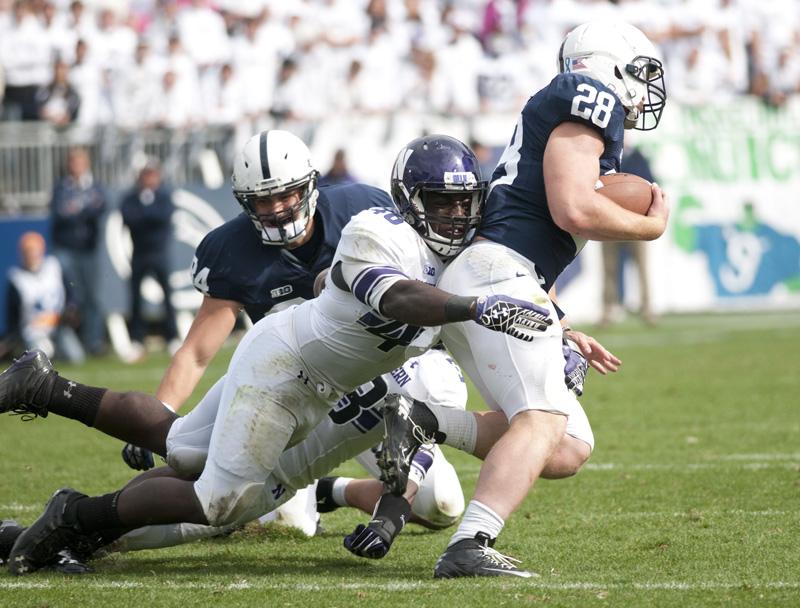 Junior linebacker Damien Proby leads the team with 62 tackles this season. He has had two games with more than 10 tackles.

Northwestern went to Lincoln, Neb., last year and beat then-No. 9 Nebraska 28-25. It was a game that set the Wildcats back on track for a bowl bid and turned their season around.

On Saturday, the Cornhuskers visit Evanston, and the Cats have moved on from last year’s game and are looking at this contest as its own entity.

“Both teams are different,” coach Pat Fitzgerald said. “So last year is what it is.”

The game will feature two of the more dynamic running attacks in the Big Ten. The Cornhuskers are the top-ranked rushing offense in the conference, and the Cats come in at number four. Both teams have explosive running backs in NU junior Venric Mark and Nebraska’s Rex Burkhead.

This puts a lot of pressure on the defense to shut down these potent ground attacks. NU has a large advantage when it comes to stopping the run, giving up nearly 80 yards fewer per game than Nebraska does on the ground. The Cats rank second in the Big Ten in rushing defense, and defensive coordinator Mike Hankwitz said the defense will need to continue to be strong in the basics to stop Nebraska.

“We’ve got to be fundamentally sound,” Hankwitz said. “You’ve got to be in the right spot because they run enough option component things, that if you got a guy out of position they have a chance to make a big play.”

The Nebraska rushing attack provides a couple of unique challenges for the NU defense. The Cornhuskers have a two-back system with Burkhead filling the role of punisher while Ameer Abdullah plays the speedster. In addition, quarterback Taylor Martinez is capable of escaping the pocket and gaining large chunks of yards by scrambling. This three-headed monster will be difficult to stop, and Hankwitz said they are more prolific now than last year.

The key for the Cats will be stopping the quarterback draw, something they did not do very well early against Minnesota last week. In the first half of that game, MarQueis Gray ran for 76 yards on 7 carries including a 25-yard touchdown run. Senior defensive lineman Quentin Williams said the defensive line needs to focus on keeping Martinez in containment more and not allowing him to get outside of the pocket.

“It’s always a constant thing in your mind to be aware of the draw,” Williams said. “It’s definitely going to be higher on our minds this week. (Martinez) wants to run the ball. He’s a fast kid, and if you let him out, he’s going to hurt you.”

While its running attack has been prolific, NU’s passing game has been anemic recently. The Cats threw for a combined 202 yards the last two weeks, about 100 yards less than sophomore Trevor Siemian threw for against Indiana on Sept. 29. Quarterback Kain Colter said he sees the potential for the Cats to make some explosive plays, but the offense has not been consistent enough to capitalize on these opportunities.

“The way we ran the ball last week might open the play-action game a little bit,” the junior said. “On offense we’ve been a little inconsistent, and there are some areas where we can make some big time plays. We’ve got athletes all around the field and those guys are going to go make plays when the ball’s in their hands.”

The game will be broadcasted regionally on ABC, and the national media has started to descend upon the Cats. With all the distractions surrounding Saturday’s game, NU remains focused on just this week. Senior offensive lineman Brian Mulroe said the team must remain focused on the task at hand in order to keep all of the Cats’ goals in front of them.

The distractions that surround a game like this can be difficult to deal with. Fitzgerald said the level of focus will be the difference in the contest Saturday.

“The hallmark of any good player or competitor or team is how do you handle success,” Fitzgerald said.”With 17-to-23-year-old young men, that’s the challenge. We’ve got distractions all over the place. … This is when leadership needs to step up. This is when I need to see that group of guys take that next step collectively.”