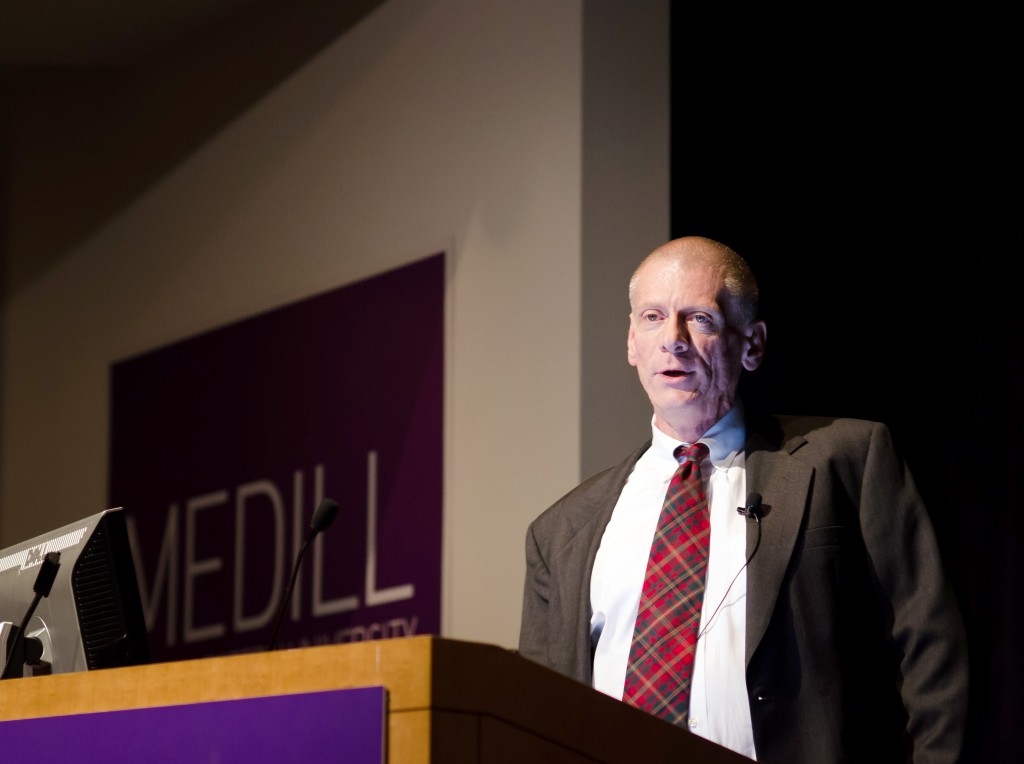 Justin Gillis, an environmental science reporter for The New York Times, speaks to a crowd of students, faculty and local scientists about the realities of climate change and how accurate journalism can combat public apathy on the issue.

“One of the urgent tasks of our time is for people like us to find a common language to alert the public to the reality of the situation we are in,” Gillis said at the beginning of his lecture.

The event, hosted by the Northwestern Energy and Sustainability Consortium, brought together an audience of journalists, scientists and other interested members of the Northwestern community in the McCormick Tribune Center. Just more than 100 people attended in total.

David Snydacker, a graduate student representative for NESC, organized the event to emphasize the importance of the connection between science and the media when it comes to the issue of climate change.

“Climate change is a really fascinating subject, but it’s hard to get scientists who study climate change to comment on problems like communication,” the McCormick graduate student said. “Somebody like Justin, who has traveled the country and spoken to many prominent climate scientists, is particularly well situated to synthesize all the information and to make it relatable and understandable for non-climate scientists.”

The award-winning reporter pointed to polling data that shows more than 50 percent of Americans believe global warming exists but very few understand the urgency. Gillis illustrated his point by comparing photos of the Arctic ice caps taken by satellite Nimbus-7 in both 1979 and 2012, showing that more than 50 percent of the ice sheet has already melted.

“There’s a possibility of up to 250 feet of sea level rise locked up in the Arctic ice caps,” Gillis explained. “Tens of millions of people live within 100 feet of sea level, and many of the world’s major cities are just a few feet above sea level.”

Maninpat Naviroj, another McCormick graduate student, said he enjoyed hearing about the climate issue from a journalist as opposed to a scientist.

“He has been in the field for so long and that he feels that one of the biggest problems is conveying the issue is a new insight for me,” Naviroj said. “Because I come from an engineering background, I am used to thinking about it from the science side rather than the rhetoric side.”

Following the lecture, Gillis took questions on a variety of topics from the audience, including what scientists can do to help advocate for a response to climate change, and how much of a connection the recession had to the diminishing role of the environment in news coverage.

Gillis said he was happy to deliver the talk at “the best journalism school in the country” and “one of the best universities in the country.”

“If you look at the politics of the moment, things are just not moving,” Gillis told The Daily following the talk. “The overriding imperative here is to get accurate information over to the public and in order to do that we’ve got to go back to the basics … So I feel like if I’m going to come anywhere and make this case for upgrading our journalistic knowledge base, this is the right place to do it.”