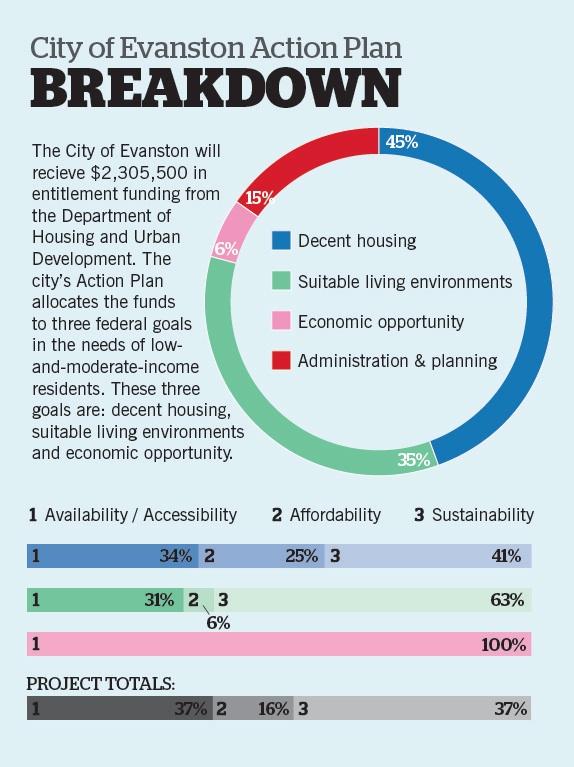 Evanston will hold two public meetings Tuesday and Thursday to gather feedback on its proposed 2013 Action Plan, which outlines how the city would use funds from the U.S. Department of Housing and Urban Development to improve the quality of life for low- and moderate-income Evanston residents.

“The Action Plan is an annual roadmap … that explains how we plan to use federal fund grants,” said Sarah Flax, the city’s grants administrator. “One of the things we really are trying to do is to get feedback and get people interested in what we are doing.”

According to estimates in the draft plan, HUD would award about $2 million to Evanston for its 2013 program year, approximately 3 percent less  than the actual grants received in 2012. The funds consist of the Community Development Block Grant, Emergency Solutions Grant and HOME Investment Partnerships Program grants.

These funds would create more affordable housing for low- and moderate-income residents, improve their living environment and expand their economic opportunities, Flax said.

According to federal standard, these residents earn less than 80 percent of the area median household income, or $66,650 a year for a four-person household in Evanston, she added.

“These are not necessarily people who are absolutely destitute by any stretch of the imagination,” Flax said. “But they are below the median income and are likely to have more struggles accomplishing everything they want to have a stable, balanced life than people with a higher income.”

Rental subsidies could offer critical support for low-income residents struggling with crises such as job loss or injury, said Dan Lewis, director of NU’s Center for Civic Engagement and a member of the Mayor’s Homeless Task Force.

“If we can figure out a way to get them over the crisis … without losing their place to live, then we could avoid people becoming homeless,” Lewis said. “So subsidies are really important ways to get people through these crises. The fact that Evanston is committed to thinking about those kinds of support … is a very good sign that it will be successful.”

Activities to maintain a suitable living environment — including improvements on public facilities and services — will take 35 percent of the funds. Another 6 percent will be used to create economic opportunities, such as attracting new businesses and supporting existing ones in the neighborhood. The remaining 15 percent is reserved for administration and planning, Flax said.

Flax added that the goal is not to eliminate the problems in one year but to work toward the city’s long-term aims in assisting low-income residents.

Lewis said he thinks the plan will likely succeed.

“I think it’s terrific,” he said. “It’s very ambitious, but I think Evanston is the kind of town where there’s a really good chance of succeeding with the goals of the plan.”

To involve residents in the feedback process, the city sent out e-newsletters and advertised the public meetings through non-profit organizations, Flax said.

“The city should do much much more … (in) housing, jobs, and training,” she said.