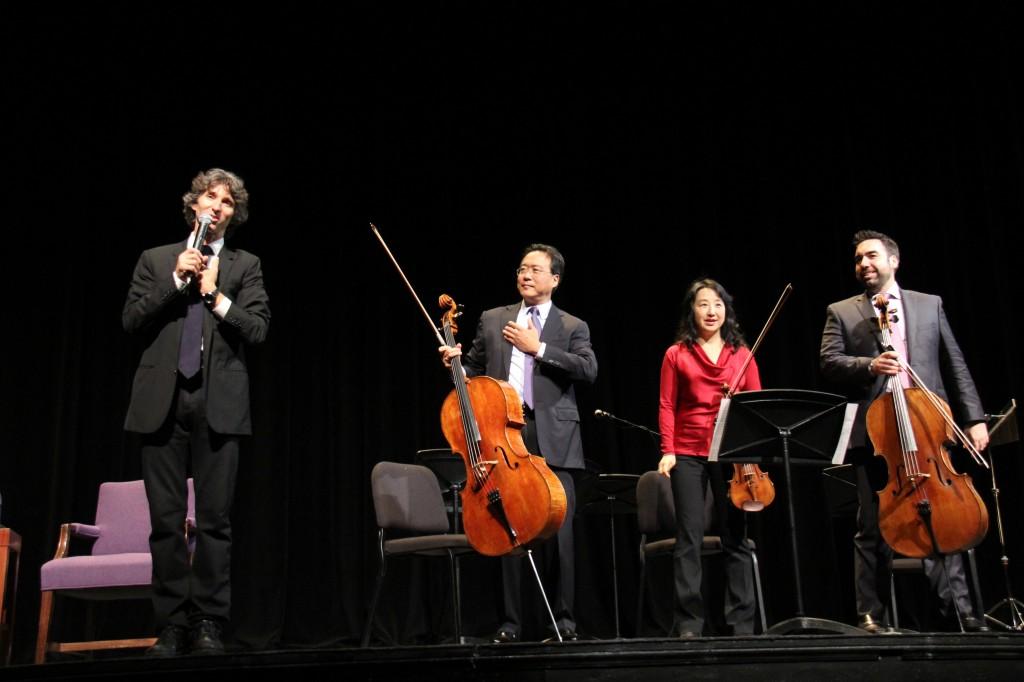 Cello extraordinaire Yo-Yo Ma, together with ballet star Damian Woetzel, talks about music and citizenship at Northwestern's Cahn Auditorium as part of the 23rd Annual Chicago Humanities Festival. Ma and Woetzel discussed how artists practice their citizenship as individuals and through institutions.

Ma, a 16-time Grammy award winner and Presidential Medal of Freedom recipient presented alongside Woetzel and the Chicago Symphony Orchestra following Hodgman’s discussion. The event was hosted by the Chicago Humanities Festival, an organization that aims to promote the fine arts, according to the festival’s website.

Ma spoke with Woetzel about the relationship between citizenship and art, with Ma performing alongside the Chicago Symphony Orchestra as part of the presentation and Woetzel instructing the audience in dance moves to accompany the music.

Throughout their conversation, Ma and Woetzel spoke about their experiences with the arts and their beliefs about collaboration and civic engagement.

“There is a connection between the Constitution document that binds the country together and a musical composition,” Ma said. “The Constitution is about something bigger than ourselves, and the scores are the same thing, and the more we understand it the more we can do for and with it … Every generation has to reinterpret these notes to get more meaning.”

Weinberg and Bienen freshman Arthur Shou said he was drawn to the event for the opportunity to see Ma in person.

“You saw how art relates to society, how it connects to a community, how it connects to the broader scope of things,” Shou said. “I feel like that’s something that’s not really talked about in the world of art. We talk about cutting arts from schools. People don’t know what to do with it. I thought it was really special to hear someone like Ma talk about what art means in the community.”

Ma repeatedly used analogies to explain his passion for the arts to the audience.

“Music is like hamburgers,” Ma said. “I have had a hamburger before but … I still crave the next hamburger. What is a hamburger? How will it be made today? Is it grilled? Are there tomatoes? I’m getting hungry just talking about it.”

Before Ma and Woetzel spoke, Hodgman and playwright and NPR host Peter Sagal addressed the audience. Hodgman, The Daily Show’s self-proclaimed “deranged millionaire” and the actor who played the PC in a series of Apple television ads, discussed his latest book and took questions from the audience.

Sagal and Hodgman spoke about pop culture and the impact technology has had on Hodgman’s career in a wide-ranging conversation that included Hodgman throwing his socks into the crowd. Hodgman also gave advice to attendees about how to be successful in the creative arts.

“The most important thing is to be honest,” Hodgman said.”Even if you are writing a book about fake facts.”