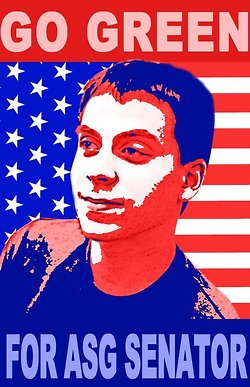 Communication sophomore Brandon Green was jokingly nominated as a write-in candidate for Associated Student Government senator several residential colleges on South Campus and won. There were no other candidates in the area's race.

A handful of Communications Residential College students sat in a first-floor common room in early October and decided it would be funny to start a write-in campaign for their friend in an Associated Student Government Senate race.

Communication sophomore Brandon Green was nominated in the race that saw no other candidates.

“Brandon’s pretty well known around here,” said Communication sophomore Brad Leyden, Green’s unofficial campaign manager. “A lot of people thought he would be a good person to rally behind as this kind of joke.”

Three hours, one flier and 45 Facebook likes later, Green was elected as senator.

After what started as a joke campaign, Green now serves as senator for CRC, Jones Residential College and International Studies Residential College. Despite having little knowledge of the duties of an ASG senator prior to winning, he has since taken up all responsibilities, including attending weekly caucuses, holding office hours and hosting monthly forums.

“I decided to take it seriously,” he said.

Leyden said he credits the Facebook page, which he and a few other CRC residents run independent of Green, as the reason for Green’s victory.

“It was a fairly easy election to win because there were no candidates,” Leyden said. “It was really just a matter of getting enough people in CRC to see this stuff and convince them to write in a vote rather than vote ‘no confidence’ or not vote at all.”

Prior to Green, no candidates had been nominated for the area because ASG had difficulty notifying students in the three residential colleges about the election.

“Usually ASG tries to come around to every dorm and get people interested,” ASG Senate speaker Ani Ajith said. “Unfortunately, with our late start this year and our compressed election schedule, we couldn’t coincide our visits with the RC munchies.”

He said Green’s election as a write-in candidate is not unusual.

“It does happen relatively frequently,” Ajith said. “This year I think there are at least a couple of write-ins.”

“We post fake blog posts for him on there,” said Bohlken, a Communication sophomore. “It’s completely non-serious, and Brandon doesn’t actually have any control over it.”

One of these fake entries is an acceptance speech posted under Green’s name on the CRC Tumblr blog, “CRC What?!” The post talks about Green’s plans to  improve the Jones-ISRC-CRC residential area, as well as how students had “rallied behind an ideal” in electing him.

“A few short days ago, I didn’t have much of an idea of what ASG was, let alone an aspiration to serve as senator, and yet, through the power of democracy and the will of God, here I am,” the post reads. “… To get to where I am has demanded three long hours of campaigning, but our journey is far from over.”

Green, a radio, television and film major, said he thought he would focus on legislation that reflects his own interests.

“I figure I’m going to be an advocate for film and theater,” he said. “It just happens to be that that’s actually what a majority of my constituency wants.”

This victory will not mark Green’s first experience in student government. In high school, he was elected youth governor of the state of Indiana through the YMCA program Youth and Government. He traveled to Washington, D.C., and voted on mock legislation with other youth governors from around the world.

“We would basically do exactly what ASG does,” he said.

Although Green’s friends knew he had some prior experience in student government, they did not expect his enthusiasm for the position to be so genuine.

“I think it’s a really interesting story,” Leyden said. “We were bored on a Friday afternoon, decided to make this joke in response to the lack of nominations and we ended up getting a leader that’s probably going to do the job better than someone who was elected by chance.”