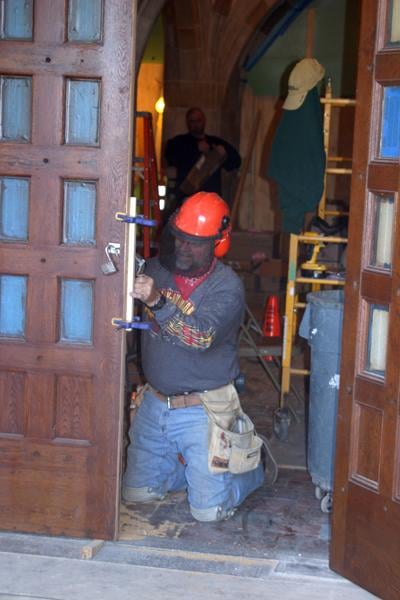 A worker takes part in preparations for opening the front doors of Deering Library to the public. Construction was done in the lobby and the exterior of the library. The doors will officially open Saturday of Homecoming weekend.

Closed for the majority of the last 42 years, the doors to Deering Library will permanently open by the end of the month.

Starting Oct. 27, students will be able to enter Deering through its main doors instead of through side hallways from the main desk in University Library. The front lobby and exterior of the building underwent extensive renovations in the spring and over the summer in preparation for the opening of the doors on the Saturday of Homecoming weekend.

The new doors will be operational 8:30 a.m. to about 10 p.m. for most of the week. However, students can still enter the library from the main entrance outside those hours, library dean Sarah Pritchard said.

The doors to the nearly 80-year-old building were closed in 1970 after the completion of University Library, which became the main library entrance. Since then, the doors have only been opened for special occasions such as individual Northwestern schools’ commencement ceremonies and the building’s 75th anniversary.

Until the doors open, students wanting to enter Deering must follow a series of signs through side hallways and stairwells.

Pritchard said the roundabout entrance discouraged many students from regularly visiting the library.

“Over time, people lost a sense of contact with Deering,” she said. “Many students have graduated and didn’t know they could go through that corridor and use the rooms on the other side.”

Opening the doors required the installation of a staffed desk where students could scan their WildCARDs, as well as security cameras to monitor the area.

Deering’s exterior also underwent construction over the summer, with extensive work completed on the front steps to create a “plaza” where speeches and campus events can be held.

The larger, stage-like area in front of Deering has already proved useful this school year, serving as the site for the first Deering Days Welcome BBQ event for the Class of 2016. Just two days later, the plaza was used for a much more tragic purpose: the commemoration of McCormick sophomore Harsha Maddula, whose body was recovered from Wilmette Harbor Sept. 28.

The exterior renovations, which involved the installation of a gently sloping ramp, also helped improve disabled access to the building.

The renovations to Deering’s exterior and lobby area cost several million dollars, donated by the Chauncey and Marion Deering McCormick Foundation and a member of the Deering family. Pritchard secured the funds for the additional staff through NU’s campus budget committee in January.

Associated Student Government joined the efforts to open Deering’s doors and make it more accessible to the NU community last October when it unanimously passed a resolution endorsing the library’s plans.

Ani Ajith, speaker of the senate for ASG, initiated ASG’s interest in plans for opening the doors. Improved access to Deering will further establish the library as a central focal point on campus, he said.

“Deering Library and the meadow is almost the heart of campus,” the Weinberg junior and former Daily columnist said. “You see Deering Library in all photos. It’s the place we gather in moments of tragedy and also moments of fun and happiness.”

Bienen freshman Ally Fion, a student assistant in the music library, said opening the doors will allow more NU students to enjoy some of the lesser-known features of Deering.

“There are over 20,000 CDs in there, from pop to the Beatles,” she said. “Nobody would think of going into there, but it’s the first room when you come in here.”

Pritchard said opening the doors during Homecoming weekend will allow both current and former NU students to witness the milestone for the library.

“There’s very strong alumni affection for Deering library, especially for people who graduated when that was the only library,” she said.