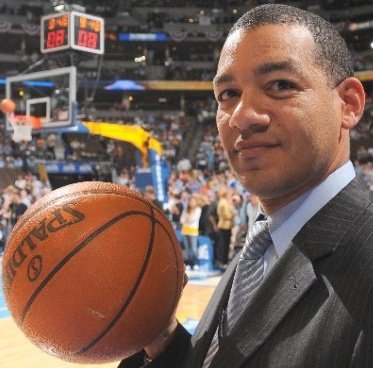 J.A. Adande will be the grand marshal for Northwestern's 2012 Homecoming Parade at the end of October.

J.A. Adande will be the grand marshal for Northwestern’s 2012 Homecoming Parade at the end of the month.

Adande (Medill ’92), a sports columnist who covers professional basketball for ESPN, will lead and speak during the parade, which is scheduled for Oct. 26.

He said receiving this opportunity from a school with so many notable alumni is a “great honor.”

Adande, whose birthday is the day before the parade, also said he is excited to be going back at NU and catching up with old friends.

“I’m looking forward to everything,” he said. “Seeing the changes on campus, seeing the enthusiasm on campus, there’s so much more school spirit now than there was when I was there, and to be able to be a part of that.”

Emily Lane, co-chair of the 2012 Homecoming executive board, said her committees, with the help of the Northwestern Alumni Association, looks for grand marshal candidates who “exemplify the Northwestern spirit and continuing partnership with the University.”

Lane, a Communication junior, said Homecoming officials also discuss potential alumni based on who is having a reunion that year. Adande is celebrating his 20 year reunion.

Adande said the atmosphere around campus, both in general and surrounding football, was less enthusiastic when he was an undergraduate student.

“The game wasn’t that big of a deal; maybe I went to the parade,” he said. “The team wasn’t as good and we didn’t have as many campus-wide rallies or even the walk through the arch that freshmen do now. I can’t even remember who the grand marshals were. Hopefully 20 years from now, the students aren’t saying the same thing about me.”

The Wildcats went 0-11 his sophomore year, Adande said. He said he’s happy to see the team getting better these days.

“There was a lot of grumbling on my Facebook page about that first game, beating Syracuse,” he said. “They had a big lead and they gave it up. People are actually complaining about a victory, and that never used to happen.”

The football game and Homecoming Parade led by Adande will close out a week of Homecoming-related activities. The week begins with a paint fight and Lakefill bonfire on Sunday, Oct. 21 and continues with other events, including a talent show hosted by the Homecoming Royalty on Oct. 24 and a mixer for student and alumni preceding the parade.

The parade, which will include floats by students and organizations on campus, will begin on North Campus and end at Deering Meadow for the Pep Rally. Though Adande  hopes for a big turnout and a win Saturday, he said he mostly wants to remind students to take advantage of everything the university offers. Many of his career opportunities have been a result of what he learned at NU, Adande said.

“I got a lot from my classes, from the location, Chicago, all these things Northwestern offered I was able to utilize and it paid me back,” he said. “Hopefully they can learn and see what can come from being a Northwestern student.”