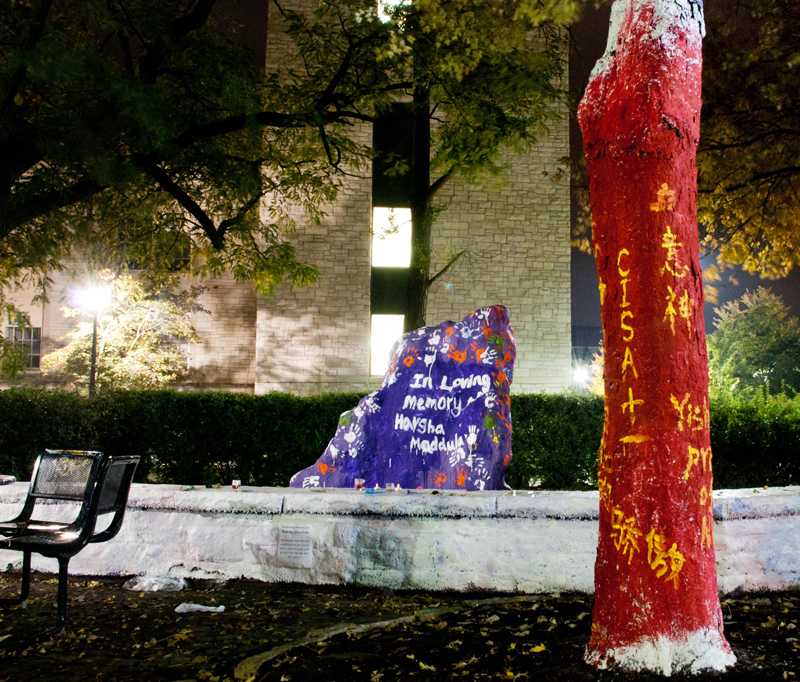 A photo shows the tree painted by the Chinese International Student Association in 2012.

The Chinese International Student Association painted the tree next to The Rock on Monday, one day before Northwestern student leaders called for a two-week hiatus on Rock painting out of respect for Harsha Maddula.

Members of CISA, led by President Chelsea Yang, wanted to continue their tradition of recognizing China’s National Day on Oct. 1 without being insensitive to the commemoration of Maddula, an NU student whose body was found in Wilmette Harbor a week ago.

Students painted the rock in honor of the McCormick sophomore Sept. 25, shortly after the vigil hosted by Public Affairs Residential College students. Associated Student Government President Victor Shao rallied support from student leaders Tuesday and sent out an email to the NU community about banning painting The Rock.

“In Hindu tradition, the period of mourning lasts for 13 days after the funeral of the deceased,” Shao wrote in the letter. “From Harsha’s funeral on October 1st until October 14th, in respect of this tradition, we ask that our community refrain from painting The Rock.”

Shao said after 13 days, students will paint the Rock purple and write “One Northwestern.”

After not finding any rules on painting from ASG on Monday, the group decided to paint the tree next to The Rock yellow and red, Yang said.

“We took into consideration that we need to be respectful to Harsha, which is why we did not paint The Rock,” Yang said. “I want my new students to still know that we maintain the tradition. I don’t want to miss this day because it’s really important.”

Lauren Masterson, ASG student groups vice president, said the campus leaders did not suggest the Rock-painting hiatus in response to the painted tree.

“I think the main thing is to preserve the memorial on The Rock and the wall,” she said.

Medill sophomore Tessa D’Agosta, who lived in PARC with Maddula, said she was not upset by the painted tree but thought ASG should have sent out the details of the Rock-painting hiatus sooner.

“I think it’s such a diverse community that there will be some people who take it very seriously and want to make the memorial last,” she said. “People have other things that are important to them. I don’t think it was a huge kind of disrespect.”