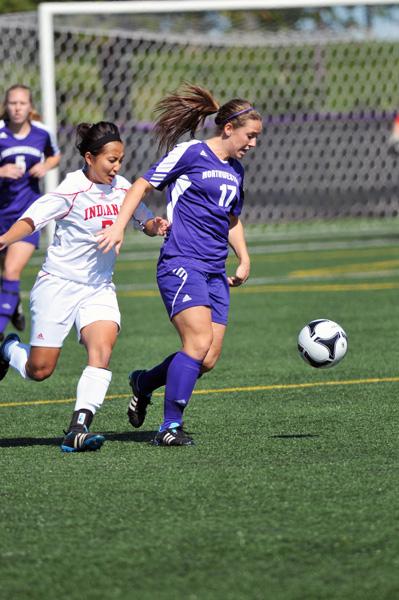 Junior Kate Allen breaks away early against Purdue on Friday but fails to find the back of the net. NU had several close calls on the weekend but came away scoreless.

Northwestern went into the weekend looking for its first Big Ten win but came out still searching for the elusive conference victory.

The Wildcats were shut out in both games of the weekend, losing 1-0 to Purdue on Friday and falling 1-0 to Indiana on Sunday.

“It’s just hard when you work so hard the whole game and one little breakdown happens and we don’t recover,” sophomore forward KK Barr said. “It’s heartbreaking when something like that happens but it puts a little fire under us. It would be a lot more beneficial to us to get one earlier so we’re not scrambling at the end.”

NU almost got off to an early jump Friday against Purdue, but neither junior forward Kate Allen nor sophomore forward Sami Schrakamp were able to convert on their great opportunities. However, the Cats showed some spark in the beginning of the second half. In the 61st minute, sophomore midfielder Niki Sebo had a close range shot off a corner kick, but the ball sailed high over the cross bar.

With barely more than ten minutes left to play, Purdue’s Taylor Niewoit scored the Boilermakers’ only goal on a shot off the post in the upper corner — a shot coach Michael Moynihan said sophomore goalkeeper Anna Cassell couldn’t do much about.

“We just got beat in the midfield,” Allen said. “It was a good shot, an unfortunate goal that we wish we could take back.”

The story would repeat itself for NU on Sunday against Indiana.

Moynihan said the Wildcats had two different ideas in how to respond to Indiana’s formation. After 10 minutes he said he was not satisfied with the results, so the Cats changed their game plan and turned the game around.

“[After] that point, we completely took over the game,” Moynihan said. “From about 10 minutes on, we dominated every aspect.”

After holding the Hoosiers to a scoreless first half, the Wildcats turned it on in the second, recording nine shots and numerous one-on-one opportunities. However, Indiana’s goalkeeper Sarah Stone proved to be up to the task, making six saves while keeping the Cats off the board.

“I tried to get it around her but she had so many great saves,” Barr said. “She came out of nowhere. It’s hard when you work that hard to make up for everything, and it sucks when I know I need to work on my finishing.”

Despite many good looks, the NU offense could not convert and the Hoosiers capitalized. With fewer than thirty minutes left of play, Indiana’s Rebecca Candler sealed the deal, scoring on a breakaway from about 15 yards out.

“It was a fluke goal on their part,” Schrakamp said. “We definitely had our chances and a lot of good ones but we couldn’t put it into the back of the net.”

NU’s loss to Indiana marks the Cats’ fifth conference loss this season and 10th straight dating back to last season. They have been shut out in six of their last eight games and have only scored once in conference play.

“It’s frustrating because it’s not showing up in the win column yet,” Moynihan said. “We haven’t gotten the results, but I feel like we’re making progress.”