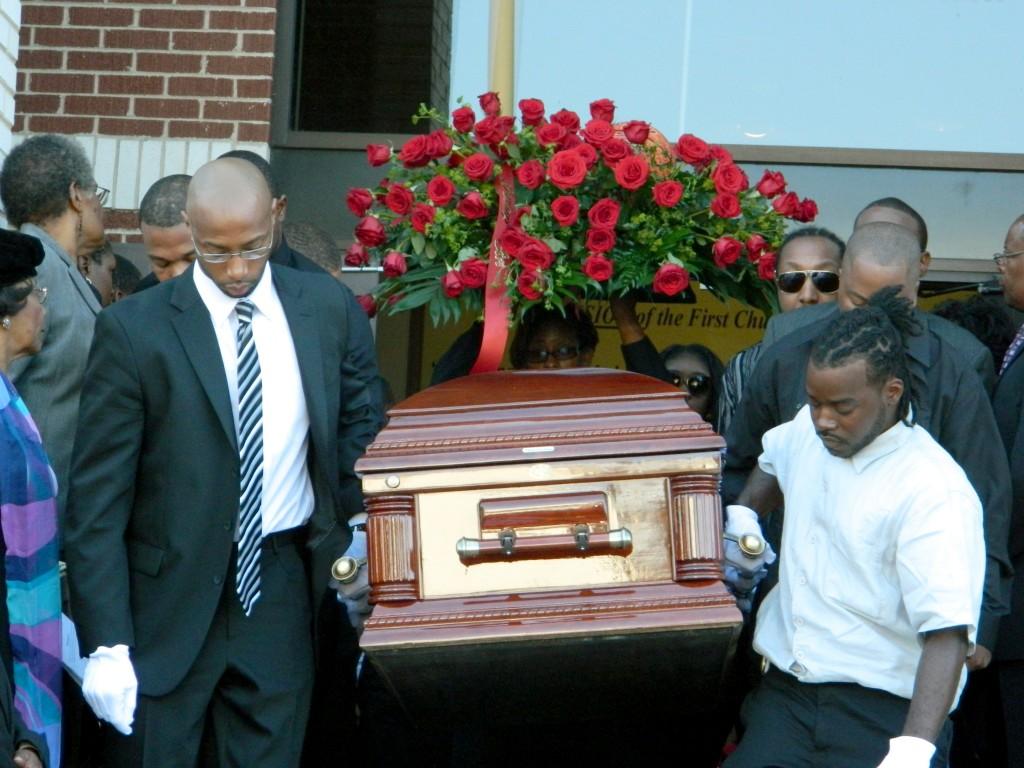 Dajae Coleman's body is carried out of the church after the funeral services, which were conducted by Pastor Kenneth Cherry.

Hundreds of people gathered Saturday morning for the funeral of 14-year-old Dajae Coleman, the Evanston Township High School freshman who was shot and killed Sept. 22.

Mourners filled the pews and standing areas inside the First Church of God Christian Life Center, 1524 Simpson St. Those who couldn’t fit gathered on the sidewalk outside.

Unlike typical funerals, the congregation was not a mass of solid black. Instead, spots of red — Coleman’s favorite color — were scattered throughout the black. Girls wore red bows in their hair and men wore red ties, while others pinned red flowers to their lapels. Alison Fero, an ETHS freshman, even dyed a portion of her hair red in honor of Coleman. Last Monday, the entire high school was a sea of red, she recalled.

Pastor Kenneth Cherry, Sr. officiated the funeral and called the ceremony a celebration of life.

“We won’t worry about events surrounding Dajae’s death,” he said.

Most refrained from discussing explicitly the details of Coleman’s death. The day before the funeral, Evanston Police announced that they had arrested an Evanston man and charged him with first-degree murder and aggravated discharge of a firearm in relation to the boy’s murder.

Instead, those who spoke during the services Saturday focused on Coleman’s life, recalling his smile as well as his success in school and on the basketball court. Some speakers knew him well; others had never met him.

Nibra White, Coleman’s middle school basketball coach, told the congregation about the way Coleman supported him during a difficult period in his life. Although Coleman was a gifted basketball player, he was also a remarkable person, White said.

“It never really was about basketball,” he said. “It was about a younger man teaching an older man about being a good character.”

Eric Witherspoon, District 202 superintendent, praised Coleman’s personality. Witherspoon urged the many young people in the audience to remember Coleman and follow his example.

“As a young man, he was making the right decisions and doing the right things,” he said. Witherspoon encouraged the young people in the church to stand up for what they knew was right.

Evanston Mayor Elizabeth Tisdahl thanked Coleman for his leadership and efforts to create a stronger community in Evanston.

Rodney Harris spoke for the Coleman family. His remarks inspired many in attendance to stand up and clap in support.

Harris spoke of a national “Dae Dae movement,” an anti-violence awareness campaign spanning media outlets and the Internet, that was inspired by Coleman’s exceptional character and his tragic death.

The Dae Dae movement began with trending tweets in the days after Coleman’s death. Several NBA players have tweeted tributes to Coleman, including a tweet from Coleman’s hero, LeBron James.

“My prayers go to the family and friends of Dajae Coleman and all of Evanston,” James tweeted Wednesday. “The violence has to end.”

James also tweeted a quote from Coleman’s humanities essay about his family and friends, written days before he died: “I think the kids that are on the street not doing anything w/their lives don’t get the type of support they need from family.”

Although Harris did not speak about the specifics of the shooting, he called for the congregation to make the world a better place in the aftermath of tragedy.